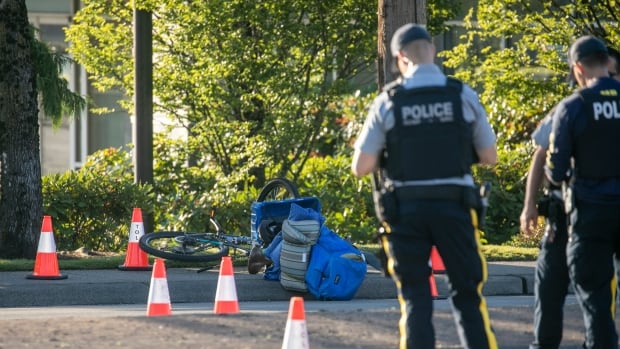 Two victims are dead and two others are seriously hurt after a series of shootings at several different locations in Langley, BC, prompted emergency alerts early Monday.

A suspect was later identified and shot dead by police.

RCMP were called to the downtown core of the City of Langley and the neighboring Township of Langley for reported shootings “in the early hours of the morning,” according to a statement.

One man was found dead by the Langley city bus loop at Logan Avenue and Glover Road. Another man was discovered dead at the nearby Creek Stone Place supportive housing project.

Police also found a woman who’d been shot near 203A Street and the Fraser Highway. She was taken to hospital in critical condition.

RCMP issued a blaring emergency alert to the public’s cellphones with a description of a suspect and possible suspect vehicle just before 6:20 am PT ⁠— the second time in the past year the Alert Ready system has been used for an active shooter scenario.

A man matching the suspect’s description was later found near Willowbrook Mall, at 200 Street and the Langley Bypass. A fourth victim, a man who’d been shot in the leg but survived, was nearby.

Police shot the suspect, the statement said. He was pronounced dead at the scene.

“At this time we don’t know the motive behind this deadly incident, nor if there was any relationship between the deceased suspect and the victims,” ​​said Chief Supt. Ghalib Bhayani, assistant district commander with the Lower Mainland RCMP.

“We ask that public continue to assist us by providing any information that may be able to assist our investigation.”

Earlier in the morning, RCMP told CBC News a suspect had been taken into custody.

Sgt. Rebecca Parslow said the victims were homeless and that police believe the attack was targeted.

RCMP have established several crime scenes just a few kilometers apart: one at Willowbrook Mall, another at Cascades Casino on Fraser Highway and a third near a thrift store and Logan Avenue bus loop.

In the parking lot of Willowbrook Mall, an unmarked black police vehicle was seen riddled with at least nine bullet holes.

The initial emergency alert described the suspect as a white man with dark hair who was wearing brown Carhartt coveralls and a blue and green camouflage T-shirt with a red logo on the right sleeve.

The notice said he was connected to a white vehicle. Later in the morning, police were seen investigating a white four-door sedan and covering its license plates in the mall parking lot near the damaged police vehicle.

Officials sent a second emergency alert just after 7:20 am PT. It said the suspect was “no longer a threat” but reiterated the need to stay away from the downtown core as officers ruled out the possibility of multiple suspects.

The city and township of Langley are located around 40 kilometers southeast of Vancouver.

City of Langley Mayor Val van den Broek was at a loss for words on Monday.

“I can’t even explain it. Like I said, my heart breaks. This is something that you never want to see happen in your community. Never, ever,” she said.

“Sorry, I’m pretty emotional right now,” she added, through tears. “I volunteer with the homeless and I know them and it’s very personal for me as well.”

The Integrated Homicide Investigation Team (IHIT) is responding to the incident. The Independent Investigations Office of BC, which looks into police-related incidents causing serious harm or death, has also been called out as a result of the suspect’s death.

RCMP have closed 200 Street, a major route through the center of the city, between Willowbrook Mall and the Langley Bypass.

Police specified the following areas as places for the public to avoid: