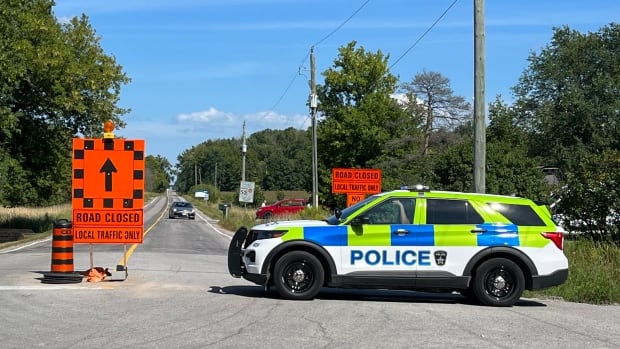 Barry, Ont. Police say six people died in a vehicle crash early Sunday and they are believed to be the same people reported missing hours earlier.

The single-vehicle crash happened in the area of ​​McKay Road and Simcoe County Road 27, southwest of Barrie, according to Jennett Mays, spokesperson for the Barrie Police Service. Officers found the vehicle at about 2 am

All six people were found dead at the crash site, Mays said. Police have not released names and exact ages.

Four men and two women, all in their early 20s, were reported missing to police at about 8 pm on Saturday.

“It is believed that the occupants were the six missing persons from Saturday evening,” Mays said, adding that next of kin are being notified.

Missing persons update: At approximately 2:00 am on Sunday, August 28, the Barrie Police Service located a fatal single motor vehicle collision in the area of ​​McKay Road and County Road 27. 1/4

Police had posted missing persons reports about the six on social media accounts on Saturday but have since deleted those posts.

Police trying to piece together what led to crash

Police are trying to determine what happened before the crash and what led to it, Mays said.

“It’s going to be a complex investigation and it will continue in the coming days,” she said.

Mays would not say if alcohol had been a factor in the crash. “There is ongoing investigation that will look at what happened and what led to it,” she said. “I wouldn’t want to speculate as to what may have led to it as this point.”

According to Mays, no one had reported the crash and an officer came upon the scene, she said.

Officers from the Barrie police traffic unit, along with officers from its investigative unit, remain at the scene. Anyone with information about the crash is urged to contact Barrie police.

Barrie Mayor Jeff Lehman said the crash was a “shocking and horrible tragedy” and he urged residents to rally around the families who have lost loved ones.

“As a parent myself this is the worst nightmare. The six families in our city who are devastated this morning need all of our compassion and support, Barrie,” Lehman said on Twitter.

Lehman added that family members and friends of the six who died will need support.

A shocking and horrible tragedy has happened, taking the lives of six young people with their whole future ahead of them. As a parent myself this is the worst nightmare. The six families in our city who are devastated this morning need all of our compassion and support, Barrie. https://t.co/owQJEcJbYq

We’re all hurting today as we learn the tragic news of the car accident and the loss of six young lives. I’m thinking about the friends and families of these young people and I know that there will be many in our community in need of support in the days and weeks to come. (1/2)

Barrie Fire Chief Cory Mainprize said the news marks “such a sad day for our community” and he expressed condolences on behalf of the fire department.

On behalf of our @Barrie_Fire team we are sending our thoughts and condolences to all the families and friends impacted by today’s tragic incident on McKay Road.

Such a sad day for our community.

“On behalf of all Ontarians, I want to extend my deepest condolences to the loved ones of these six young individuals,” Ford wrote on Twitter. “We are holding you all in our hearts during this time of unspeakable pain.”

On behalf of all Ontarians, I want to extend my deepest condolences to the loved ones of these six young individuals. We are holding you all in our hearts during this time of unspeakable pain. https://t.co/8gc3YbuOKU