Last Thursday, Vanessa Fortino, a 21-year-old nursing grad student was driving home from Walmart with her boyfriend when her night took a drastic turn. After stopping to help with a car crash, she ended up with her own vehicle stolen.

Fortino told Narcity she was driving down Vanier Parkway in Ottawa at around 11 pm on May 5 when she was almost hit by a speeding car.

“These lights from a car approached me in my rearview mirror and a car was coming super fast. Maybe speeding at 100 to 120 kilometers an hour,” said Fortino. “At the last second my brain kind of automatically noticed this guy approaching me super fast and I just swerved a little bit out of the way.”

Fortino says the driver of the black car almost hit her and at that moment she was sure the brush with danger would be the “main event” of her night.

But it seems fate had another plan in store.

Around 15 seconds after the incident, Fortino says she came across a two-car collision on the corner of Queen Mary Street and Vanier Parkway and immediately knew that one of the cars involved was the one that had almost hit her.

“My brain put two and two together and I just instinctively threw my car into park.”

Fortino says her first thought seeing the “horrific” collision was “oh my god.”

Overwhelmed with the urge to help, Fortino heroically rushed to the scene but in the heat of the moment, she left the engine of her push to start Toyota RAV4 on and the car unlocked.

“I just got out and ran because that was my first instinct.”

Fortino approached the first white vehicle where its front half was “completely mangled” to check on the older male driver.

“His car kind of I guess spun out to the right side a little bit and hit a traffic light post,” she said.

When she arrived another bystander of the crash was helping the man out of his car.

“He was grasping the back the back of his neck but he was walking and he told me he was ‘Ok.’ The other man was helping him so I assumed he wasn’t in any critical condition.”

Fortino sprinted down the roads towards the second car which she says supposedly flipped a couple of times leaving a trail of glass and debris for about 100 meters.

“I assumed the worst. I automatically assumed that it would be pretty difficult to walk out of that situation good and well. So I thought this man would need some help.”

As she approached the car a bystander standing on the left side of the intersection sidewalk yelled out to her and said “No one’s in there.”

Fortino was standing in the middle of the road on the median as the man explained the driver of the vehicle had gotten out and had run back to the initial site of the crash.

In that moment of confusion, Fortino turned to see the lights of her own car driving through the scene towards her.

“I saw this car emerge behind the accident and I recognized the lights of my car and I was like ‘Oh my god. That’s my car.'”

Fotino says she watched her car speed off and after a moment of panic she asked the bystander who warned her no one was in the vehicle for help.

Fortino says her boyfriend who had been on the phone with 911 handed her the phone to report the stolen car before they got into the bystanders car to chase down the thief.

Shaken up by the theft, Fortino says she felt like she was going to throw up as they drove in the direction her car had sped off in.

Fortino reached for her phone to make a call when she realized she had left it in her car along with her other belongings and in a stroke of genius Fortino and her boyfriend used Find My iPhone to track her vehicle.

Luckily the car wasn’t moving and according to the tracking device, her phone was only five minutes away.

The resourceful group navigated the location of the car from Fortino’s phone and a mile up from the corner of Besserer Street and Charlotte Street Fortino says they could see flashing lights of cop cars and firetrucks.

“As soon as we were in distance from the car I hopped out of this guy’s car and ran towards the scene,” said Fortino.

On scene, Fortino found her Toyota RAV4 mostly unscathed and propped over a curb between a tree and a pole with the front of the car pressed against a street sign and the alleged culprit in the back of a cop car. 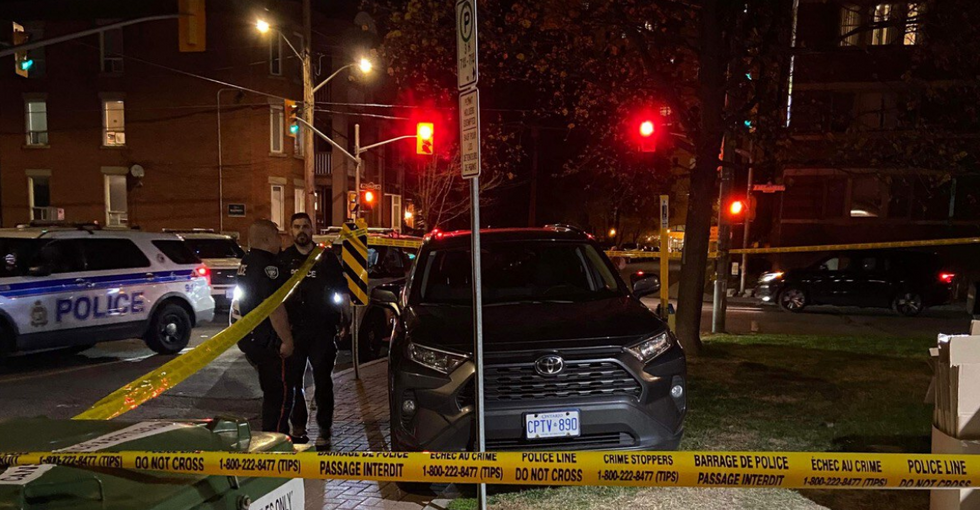 “One of the cops there told me they were parked on one of the side streets and they saw this Toyota speed by so they followed him. So when I arrived the man was already in the back of the cop cruiser.”

Ottawa Police Service confirmed to Narcity that the culprit, a 48-year-old man from Ottawa, was actually the driver from the prior accident near Vanier Parkway and Queen Mary Street who Fortino says almost hit her car earlier that night.

Police say the driver was under distress and was“arrested and charged with Dangerous Operation of a motor vehicle, Theft of a Motor vehicle, Failure to stop after an accident and Possession of Proceeds of property obtained by crime over $5000.”

Despite two scratches on her cars exterior and some blood on the steering wheel and console, Fortino says she was able to drive her car home that night.

“I’m so grateful. It’s so surreal it was the best possible outcome for every person involved. Every person made it out I want to say alive and well including my vehicle.”

In the future, Fortino says she will still jump into action to help anyone who needs it but she may double-check that her car is locked first.

This interview has been condensed and edited for clarity.