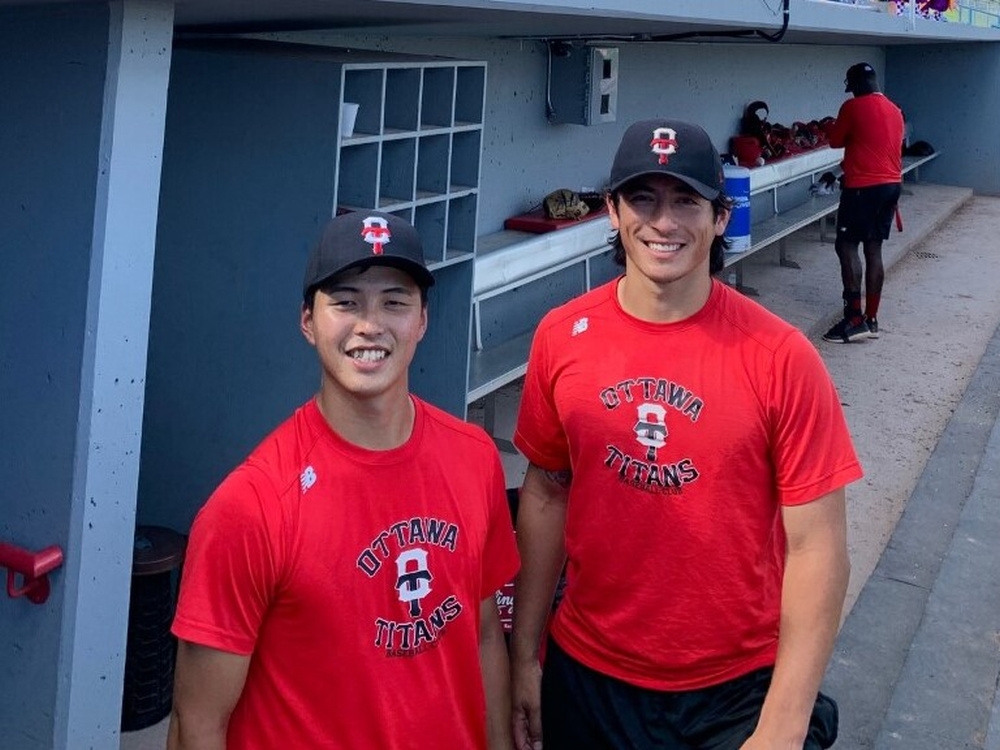 Shohei Ohtani of the Los Angeles Angels is the poster boy for Japanese baseball success in North America, but the Ottawa Titans are getting into the act, too.

Mitsuki Fukuda, a 22-year-old catcher from Fukuoka, is also attempting to make a giant cultural leap. From Quebec to New York to New Jersey to Pennsylvania to Illinois to Ohio to Kentucky to Ottawa, Fukuda is gradually finding his way, one Frontier League ballpark at a time. Titans manager Bobby Brown signed him after scouting him at a training camp in Arizona in February.

Fortunately for Fukuda, he has the translating services of teammates Kenny Williams and Kai Moody — their mothers are of Japanese descent — to help him during his path.

“Little by little, I’m getting more used to it,” Fukuda said, through Williams, before Saturday’s 6-5 win over the Sussex County Miners at Ottawa Stadium. “At the beginning, I was kind of scrambling a little bit. I’m working day by day. I’m not worried too much about the future, but I’m just trying to make the most of each day.”

One quick observation about the differences between Canada and the United States?

“The air is better here,” he said.

The Titans are doing everything they can to make Fukuda more comfortable, including Japan Night at the Park Saturday. The festivities, honoring the 150th anniversary of baseball being introduced to Japan from North America, included dancing and drum shows. The home plate featured Japanese flags.

“If my humble playing will please the people, that’s my great honor and my privilege,” he said. “It’s my way to express my deepest gratitude and respect to all our Canadian friends and the Titans. I had dinner with (Fukuda) and we talked about the friendship between countries. He’s a good athlete, with a very special brain.”

Success hasn’t come easily for Fukuda, the youngest player on the Titans. He entered Saturday’s game with a .197 batting average. As a catcher, communication with pitchers has also been a challenge.

“It’s still difficult, but we’re making it happen,” he said. “The hitting is better over here, definitely.”

In general, baseball in North America has a more laid back feel than the way the game is played in Japan.

“Every time you talk to your coach, you take your hat off and you have both hands behind your back, that’s showing them respect,” said Moody, who played in Japan as a youth. “When you come out to the field, you bow to the field, you appreciate the field and say thank you to the field.”

In his new environment, Fukuda is getting a first-hand feel for what a tight fight for a Frontier League playoff spot looks like.

On the field, it can’t get any tighter between the Titans and Miners, who entered Saturday’s game deadlocked for second spot in the East with identical 41-29 records, four games behind the Quebec Capitales.

The top teams in the East and West receive a bye into the best-of-three divisional final, while the second and third place clubs will have a one-game showdown to advance to play the divisional winner.

Home field advantage in the wild card game goes to the second place finisher, making this weekend’s pivotal series in a regular season which wraps up Sept. Four.

Saturday’s tilt was a back and forth affair, with Moody in the thick of it.

Ultimately, the Titans pulled it out at the bottom of the ninth, when Clay Fisher’s single brought home Tyrus Green, who reached base when hit by a pitch from Miners reliever James Mulry, sending the crowd of 1,425 home in a good spirits. Kevin Escorcia picked up the victory in relief.

The evening didn’t begin well for Titans starter Evan Grills, who yielded three runs on three hits in the top of the first inning.

His teammates picked him up in the bottom of the inning, though, replying with three runs and three hits of their own against Miners starter Michael Mediavilla.

After the Miners tied it at 3-3 in the third, the Titans replied immediately again, with Moody delivering a two-run single for a 5-3 edge.

From there, Grills and Mediaville both settled into a rhythm.

In the seventh, Moody went to the center field wall to snare Yanio Perez’s deep fly ball, but in his attempt to make a leaping catch, the ball bounced off his glove and over the fence for a two-run home run, deadlocking the game. 5-5.

The game was then in the hands and arms of the bullpens.

Grills went 7 2/3 innings, giving up 10 hits, while striking out eight and walking none along the way. Mediaville gave way to Mulry to start the eighth.

US Ambassador David Cohen will throw out the first pitch. He’s not expected to bring his guitar with him.

Sign up to receive daily headline news from the Edmonton Journal, a division of Postmedia Network Inc.

The next issue of Edmonton Journal Headline News will soon be in your inbox.