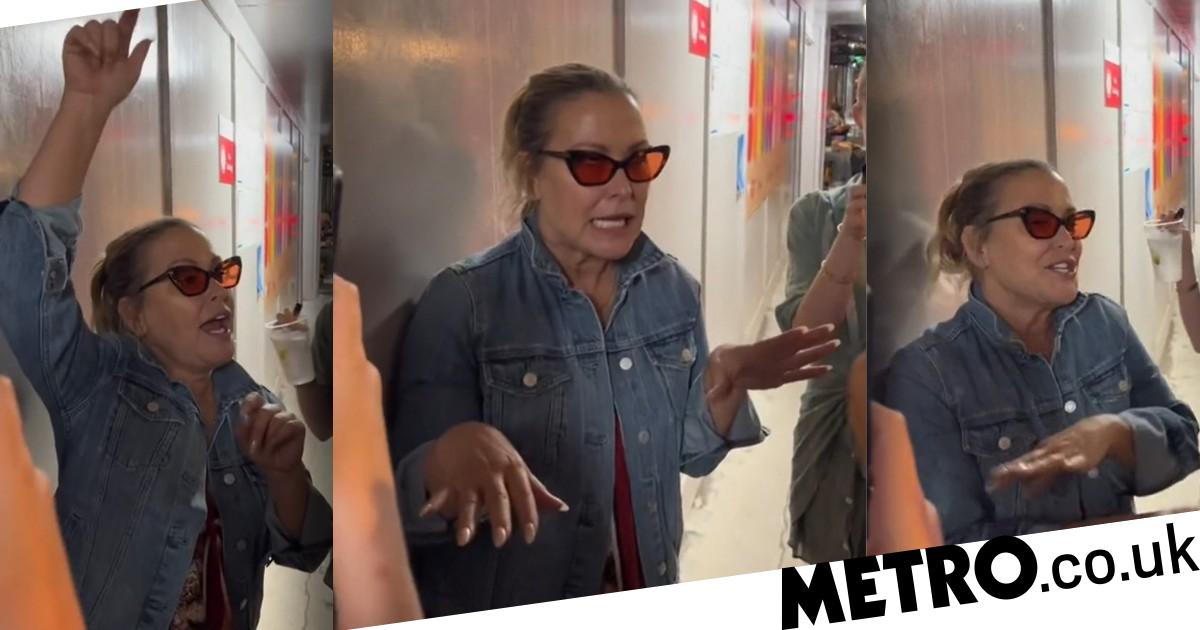 If you ever needed more proof that Anastacia is an utter icon, this is it.

The musician became a household name in the 2000’s as she produced banger after banger, including her huge hit I’m Outta Love.

With over 30 million records sold worldwide and a massive 20th-anniversary tour underway across the UK, Anastacia is still a cultural legend – and she’s happy to provide it.

It’s been a whopping 18 years since her hit Left Outside Alone was released, but it remains, to this day, an absolute tune.

And, as a few lucky fans of the singer found out recently, Anastacia can still belt it out like nobody’s business.

The star was spotted on the streets of Soho in London this week when she was stopped by a group of fans who couldn’t quite believe it was her.

And what better way to prove it than by singing?

In a video posted to TikTok by user @gbreezy95, the musician, dressed in a cool denim jacket, sings the first few bars to the chorus: ‘And I wonder if you know!’

She then stops and jokes: ‘You believe it’s me now, right?’

Anastacia then carried on through the iconic chorus, her voice as strong and unique as ever, with the fans singing along… to the best of their ability, at least.

The star has a massive grin on her face as she belts out the track, complete with dramatic hand gestures – because, well, she’s a legend.

Captioning the brilliant video, the TikTok user wrote, along with heart-eyes emojis: ‘When you bump into @freakanastacia outside your local and she gives you a private concert in the street!’

Anastacia herself later took to Instagram where she regaled her followers with what had happened, saying: ‘I want to tell you a funny story!

‘I was needing some coffee doing all the work for the tour and all of a sudden I saw this really fun bar so I accidentally went in and I found so many amazing people, it was so cool.’

It’s clear the girls in the video were absolutely hyped to meet the singer, though not everyone in the comment section appreciated this.

‘The audacity to sing along with her,’ one person wrote, with the original poster joking: ‘Lol sorry, we were a bit overexcited about meeting a queen. Nothing but love for her!’

Plenty of others loved the moment however, with one noting that Anastacia ‘was absolutely loving this.’

The star is working on her long-awaited tour – aptly named the Outta Lockdown tour after it was delayed for two years thanks to you-know-what.

She recently spoke to Metro.co.uk where she admitted she found it hard to believe it was ‘really happening.’

‘I will say, my 20th anniversary was 2020 and obviously nothing went on, with everyone, but my manager is still so bummed that it didn’t happen.

‘He literally keeps calling it the 20th anniversary. I’m like, dude…two years ago.’

Kicking off in Switzerland, the singer’s huge European tour will stop in Rome, Berlin and Prague, before heading back for a UK leg which includes a massive date at London’s Hammersmith Eventim Apollo on November 8, 2022.

The tour is Anastacia’s first since 2018 in support of her seventh studio album Evolution, which became her sixth album to reach the UK Top 10.

If you’ve got a celebrity story, video or pictures get in touch with the Metro.co.uk entertainment team by emailing us [email protected], calling 020 3615 2145 or by visiting our Submit Stuff page – we’d love to hear from you.