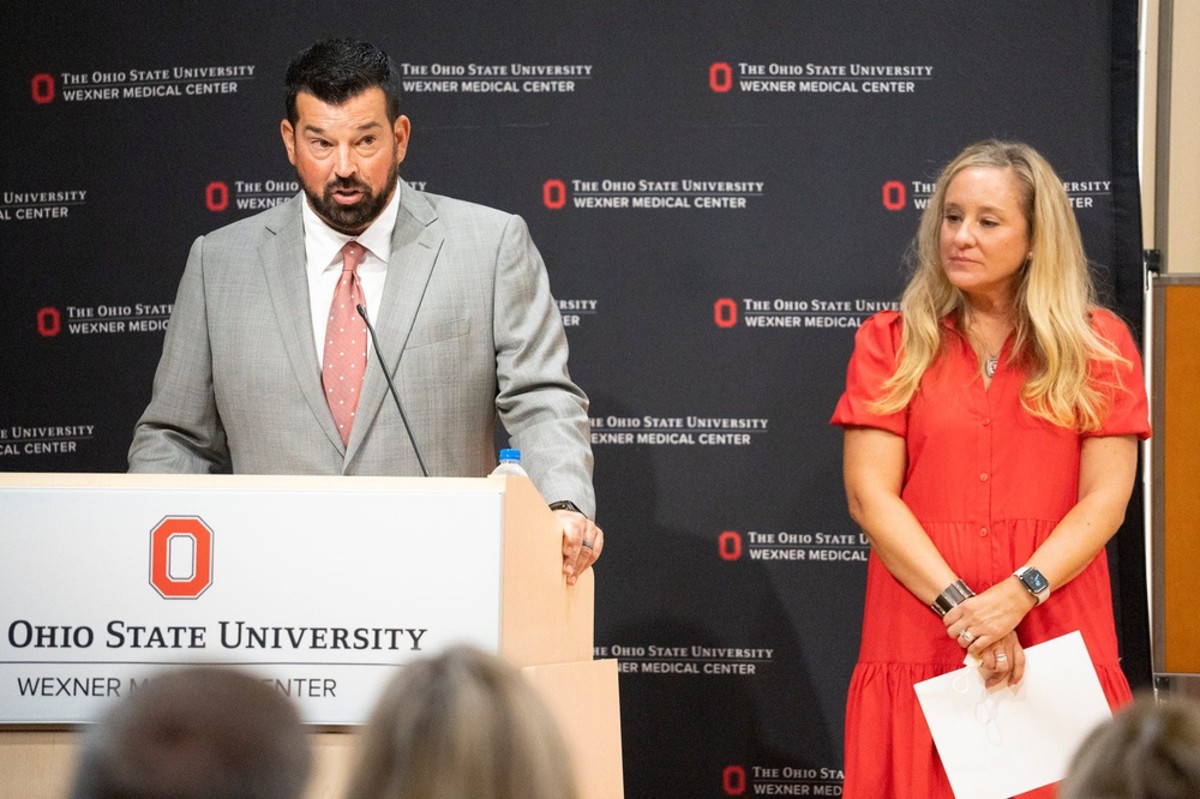 “Ohio State has been very, very good to our family, and we feel that investing in the mental wellness of Buckeye nation is a tremendous privilege and the right thing to do,” Ryan Day told Buckeyes Now. “Nina and I know from our own experiences what a great difference mental health care can make in the life of someone who is hurting.”

Ryan Day lost his father to suicide when he was just 8 years old, and Nina Day revealed that she has dealt with anxiety for the majority of her life.

“Like all families, we have shared great moments and successes while also experiencing heartache and struggle,” Nina Day said. “We want our kids to understand life is about enjoying the highs and managing the lows. We want our children to thrive in the face of adversity, and if they ever face a challenge that feels too big to handle, we want them to feel empowered to ask for help.”

Coach Mike Woodson and the Indiana coaching staff welcomed a pair of 2025 recruits to Bloomington this week. Jalen Haralson out of Fishers met with the program on Monday before Lincoln City product Trent Sisley visited on Tuesday.

Both players, who are AAU teammates for the Indy Heat Gym Rats, will enter their sophomore years of high school in 2022.

Haralson, a 6-foot-7 guard, 205-pound guard, averaged 16 points and 4.6 rebounds per game as a freshman on the varsity team. He led Fishers to a 21-3 overall record before eventually losing in the Indiana Class 4A State Tournament.

Sisley is a 6-foot-7, 185-pound forward who put up 19.9 points and 9.2 rebounds per contest for Heritage Hills High School. Both he and Haralson are making themselves a case for being some of the top prospects in the state of Indiana for the recruiting class of 2025.

After a 2021 season that ended with an 11-2 overall record, the Michigan State football program is gearing up for its fall training camp while taking on heavy expectations for the upcoming year.

head coach Mel Tucker and the Spartans are looking to win every game on their schedule en route to a first-place finish in the Big Ten Conference.

“We have shifted our culture at Michigan State,” Tucker said during Big Ten Media Days. “It’s a culture that is rooted in a relentless mindset in everything we do.

“Culture is how we live and behave every single day, a culture of accountability, attention to detail, sense of urgency, connection, being authentic, being real, and good old-fashioned hard work. You roll your sleeves up and figure out a way to get the job done.”

Tucker said that last year was a step in the right direction, but the team is in pursuit of ending a Big Ten Title drought that has extended to six years after the 2021 season. It’s a new season for the Spartans, and everyone within the program seems to be adopting a mentality that will push them toward their goal.

“We haven’t won the Big Ten championship since 2015, and that’s too long,” quarterback Payton Thorne told Spartan Nation. “Like coach said, 11-2 last year, that doesn’t put any wins in the win column this year. We’re not carrying any over. We’re 0-0 right now.”