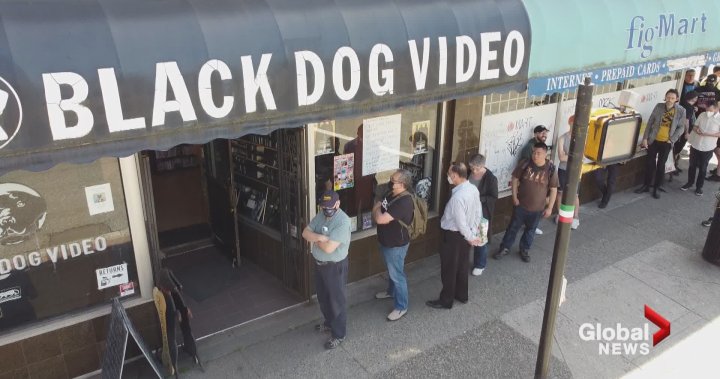 After 17 years in business at its Commercial Drive location, Black Dog Video in Vancouver is liquidating its 15,000 title inventory and closing its doors for good.

Owner Darren Gay lasted for years after streaming took out his competitors. But he says that, plus the COVID disruption was finally too much.

Dozens of people lined up outside the video store on Sunday, some waiting for three-and-a-half hours to get inside.

Gay said he will keep part of his business online but BC is losing its biggest storefront independent video store.

4:47
One of Vancouver’s last remaining video stores set to close

One of Vancouver’s last remaining video stores set to close

Gay made the announcement in April that the doors had to close.

For years, the rental shop was a hot spot for people seeking new releases for a movie night, and among those looking for selections off the beaten path.

Gay said the store boasts an inventory of more than 17,000 titles, including cult classics and movies from the early days of film history.