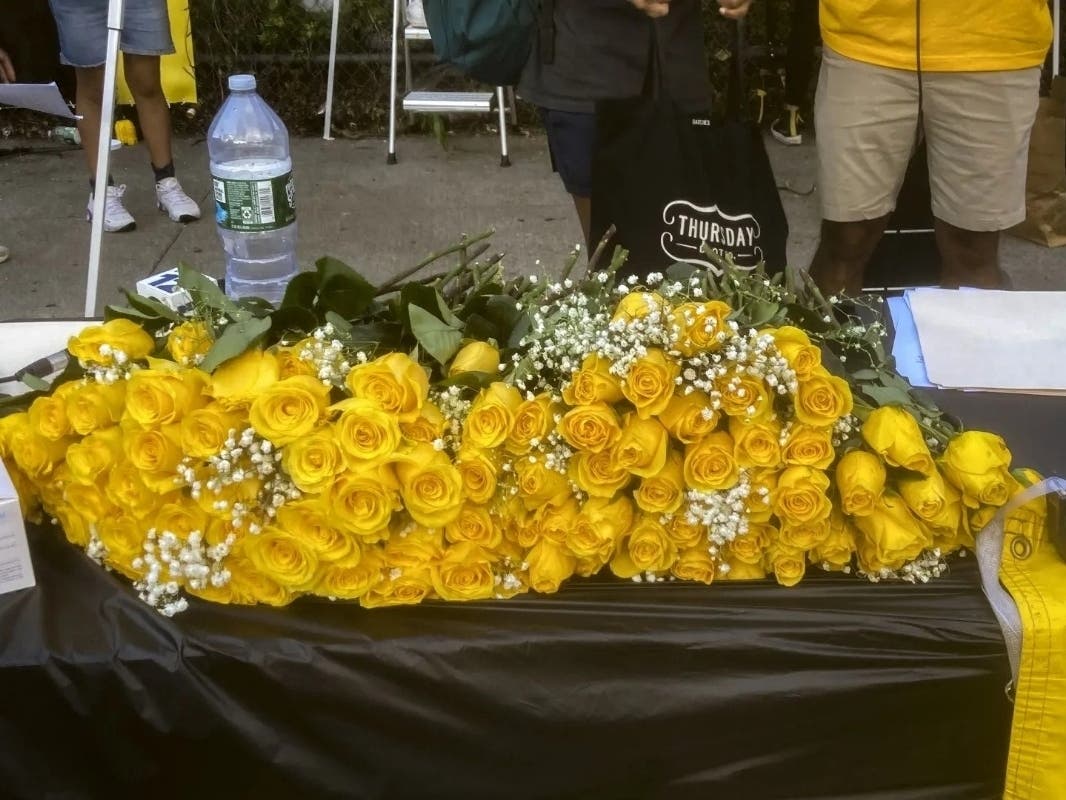 By Jonathan Custodio, THE CITY

An armory is only as good as what occupies it.

Community leaders in the northwest section of The Bronx pressed for equitable redevelopment of the long-vacant Kingsbridge Armory during a rally on Thursday in front of the landmarked mammoth building.

The Northwest Bronx Community and Clergy Coalition, Laborers’ Local 79, and several other neighborhood organizations called for the next project to prioritize fair wages, local hiring, environmental sustainability and cooperative ownership of the land through community land trusts.

The armory is entering a renewed phase of redevelopment after previous plans for a massive ice hockey center, dubbed the Kingsbridge National Ice Center, officially ended this March.

“We have a chance to influence who the developer is,” NWBCCC organizer Juan Nuñez told THE CITY after speaking at the rally. Nuñez said Kingsbridge residents can now have greater leverage than in the past community benefits agreement negotiated with the previous developer.

“We want to make sure that not only does the community get to decide what is inside, we want the land that it’s sitting on to be part of the community land trust,” he said.

Nuñez said the NWBCCC has held three meetings since February as part of its campaign to solicit community input on how the armory should be used. The city Economic Development Corporation will launch an official community engagement period beginning in September to understand residents’ vision, he said.

Towards a New Deal

Announced in 2012, the latest development deal flopped after years of legal battles entangled Kingsbridge National Ice Center Management and the EDC, sparked by a 2016 State Supreme Court ruling that KNIC had failed to meet financing deadlines, as covered extensively by the Norwood News.

With strong political backing that included support from then-Bronx Borough President Ruben Diaz Jr., the former plan for the arsenal promised nine ice skating rinks and a 5,000-seat arena with projected revenues of $1 billion over 30 years.

As owner of both the land and the armory building, the city is once again looking to strike a deal for the 500,000-square-foot project that satisfies community residents and benefits the local economy.

City Councilmember Pierina Sanchez, whose district encompasses the towering nine-story-tall structure, received $5 million in Council funds for renovations this year and is keen on repurposing the building.

“It’s really this beautiful, majestic, incredible space that could deliver so much more to this community,” Sanchez told the Riverdale Press in February. Redevelopment “could represent hundreds of jobs. [It] could represent a catalyst for economic transformation. Like a transformative project could happen there that can help the rest of the community, which is really one that is economically struggling.”

Also in February, the chair of Bronx Community Board 7 announced the formation of an ad-hoc Kingsbridge Armory Committee to gather local input.

Sanchez did not attend the rally or respond to a request for comment on Thursday.

‘A Place for the Pigeons’

Belkis Bracero has been selling second-hand clothing in front of the armory for over 15 years, as one of the first vendors on the Kingsbridge Road block that is now often lined with various goods for sale.

“We want to be a part of the armory,” Bracero told THE CITY in Spanish, noting increased safety and refuge from the elements the building gives her and her fellow vendors. “When winter comes, we’re here outside, too.”

Bracero, who also spoke at the rally, said she enjoys watching the neighborhood at work while she occupies her stand.

“I love being outside, too, because I love the movement and to see the people,” she said.

Built in 1917 for the National Guard, the Eighth Regiment Armory was made a city landmark in 1974 and entered the National Register of Historic Places in 1982. The facility shifted away from military purposes after the city took over management in 1996.

Since then, from amateur athletic facilities to shopping malls, there has been no shortage of ideas proposed for the medieval-style building, complete with an empty moat.

After taking 19 years to cut a deal for the would-be ice center and a decade for it to collapse, stakeholders are likely to push hard for a new agreement to redevelop what’s called the world’s largest armory, and harder for timely implementation.

“Since I’ve lived in the area, the armory has been what it is — a place for the pigeons,” said Wanda Salaman, chair of the NWBCCC board and involved with the organization since 1984.

THE CITY is an independent, nonprofit news organization dedicated to hard-hitting reporting that serves the people of New York.