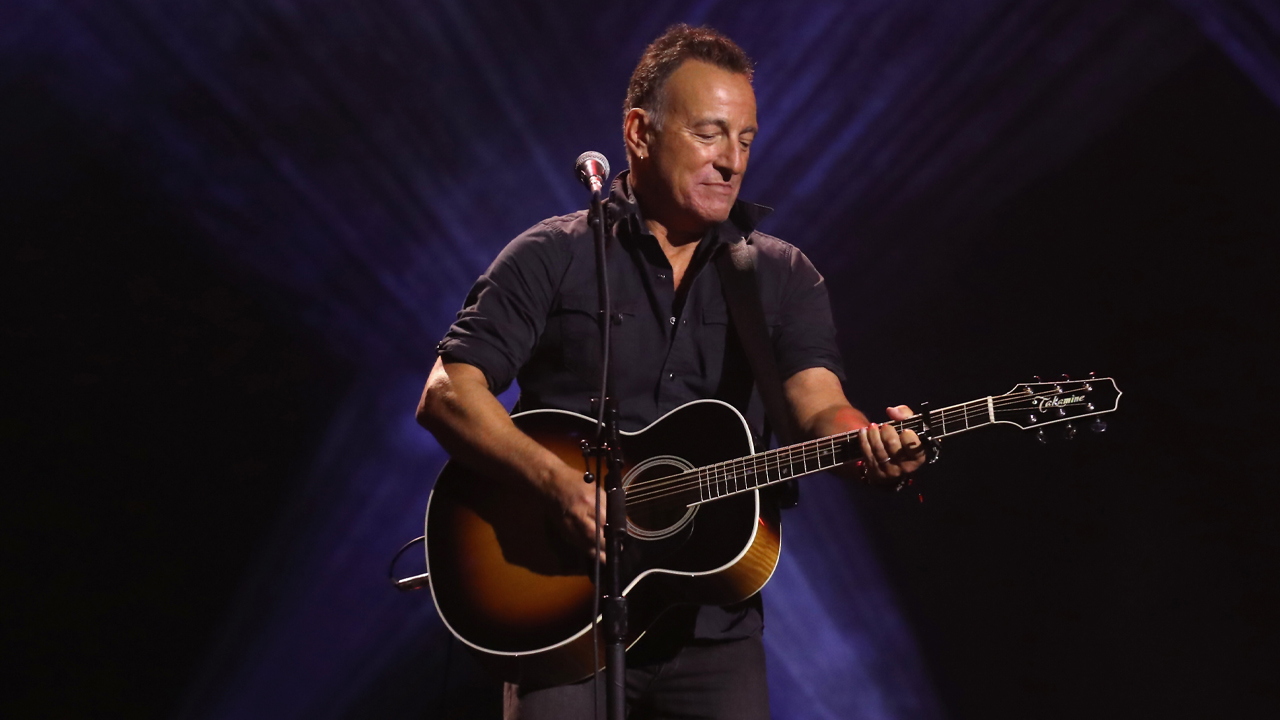 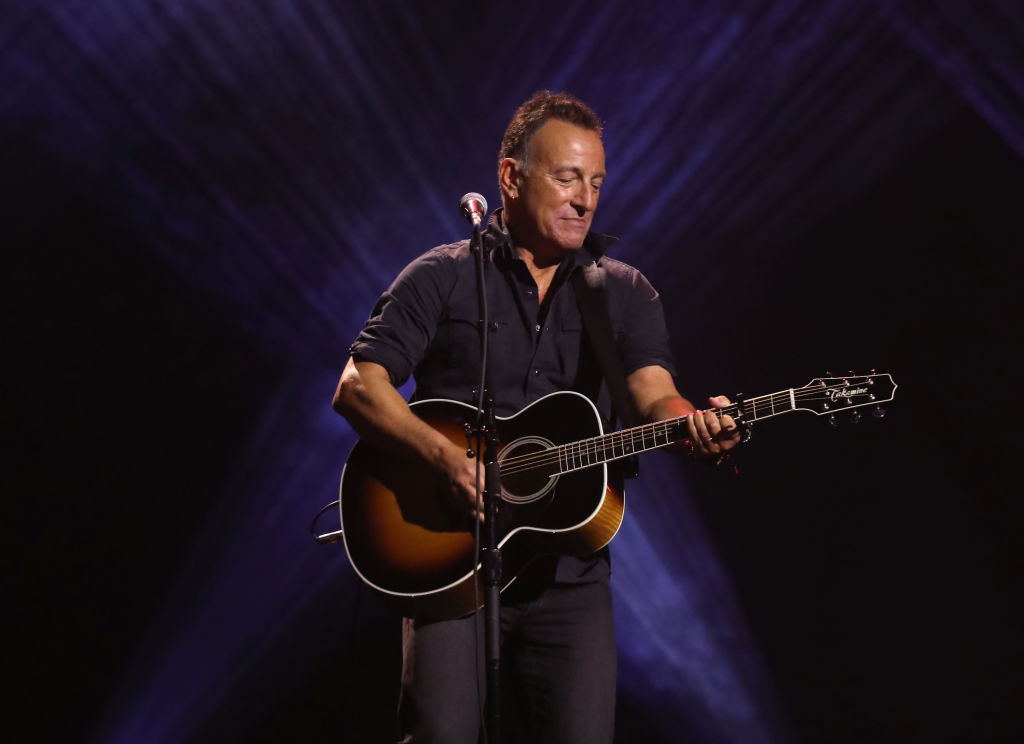 After days of festering outrage from Bruce Springsteen fans over skyrocketing prices for his upcoming tour, the musician’s team is attempting some damage control, authorizing Ticketmaster to release data and The Boss’ manager arguing that the tickets were set at a “fair price” to see one of the “very greatest artists of his generation.”

Springsteen’s new tour kicks off in February 2023, with dates across the US, the UK, and Europe. When tickets first went on sale on July 20, Ticketmaster’s “Official Platinum” dynamic pricing system sent prices surging to over $4,300 for floor seats. Additional reporting this week has noted some tickets that went for over $5,500 each.

An NJ.com op-ed with the blunt headline “Bruce Springsteen does not care about you” blasted him for abandoning the fans who shared his blue collar roots, pointing out that floor seats for his last tour in 2016 went for only $164.

New York Times columnist ron liebera self-professed “longtime” Springsteen fan, noted that while he personally agreed that tickets to his shows “are worth many, many hundreds of dollars,” he acknowledged his fellow fans’ anger, especially after Springsteen’s initial silence on the controversy “ became too conspicuous to those very people who fought and scraped to pay a lot of money” to attend his shows.

Springsteen’s manager Jon Landau issued a statement explaining that the band had “looked carefully at what our peers have been doing” when they set the ticket prices for the tour. “We chose prices that are lower than some and on par with others.”

“Regardless of the commentary about a modest number of tickets costing $1,000 or more, our true average ticket price has been in the mid-$200 range,” Landau continued. “I believe that in today’s environment, that is a fair price to see someone universally regarded as among the very greatest artists of his generation of him.”

As Lieber noted, this model of ticket pricing does put more of the concert profits in the pockets of the musicians rather than ticket scalpers, and fans still snapped up the tickets to see The Boss for the first time since 2016.

Still, as one Twitter user who said he had attended 53 previous Springsteen shows observed in a long thread, the issue with the ticket prices was not just the “market-based” pricing driving up the premium floor seats, but what “really made me sick” was how the prices were also inflated for the “nosebleed” seats, in the upper rows of the stadium in poor vantage points like corners and behind the stage. These “cheap seats” make it possible for “most working Americans” to afford a ticket, but these prices now made that “impossible” for the “people who may need that night the most” to get out and enjoy the live music.

Granted, it will be 7 years since Bruce & the ESB have toured when these shows happen, but what really made me sick? Seeing what they’re charging for the third level seats behind the stage. $241 BEFORE fees. 10/ pic.twitter.com/qydGnITSbA

I truly didn’t mind sitting in the nosebleeds because I knew I wasn’t being taken advantage of. Stadiums & arenas are some of the worst venues imaginable for seeing live music but we love the music so much, we want to experience it. 16/

With the more than $100 in Ticketmaster fees added, I observed, two tickets would end up costing almost $650, saying it “border on criminal behavior” and was “wrong on every level of decency.” That high a price for the “worst seat in an arena isn’t fair,” he said.

It needs to be said that this borders on criminal behavior. It’s wrong on every level of decency. twenty/ pic.twitter.com/iEOhRGZ2mN

Other Springsteen fans have bitterly commented that it can be cheaper to fly across the ocean and buy a ticket to one of the European cities where the band will play than to just buy a ticket to the show in their own cities, squarely placing the blame on Ticketmaster.

In my own hometown of Orlando, Florida, Springsteen will play at the Amway Center on Feb. 5, 2023. “Verified Resale Tickets” are still available throughout the arena, and the majority of the uppermost section are still $350-400 each. The absolute cheapest seats are in the upper sections behind the stage, but tickets in the very last row still demanded $195.00 each plus the much-maligned Ticketmaster fees, which add over $90 to the price. After taxes, you’d shell out $500 for you and a friend to hang from the rafters to watch the back of Springsteen’s head.

It’s not just the VIP floor seats demanding a mortgage payment to purchase. If you wanted to get out of the nosebleed section, there are a handful of scattered tickets available through the middle section in the $600-800 range but mostly with four-digit price tags, especially if you want two or more tickets seated together. 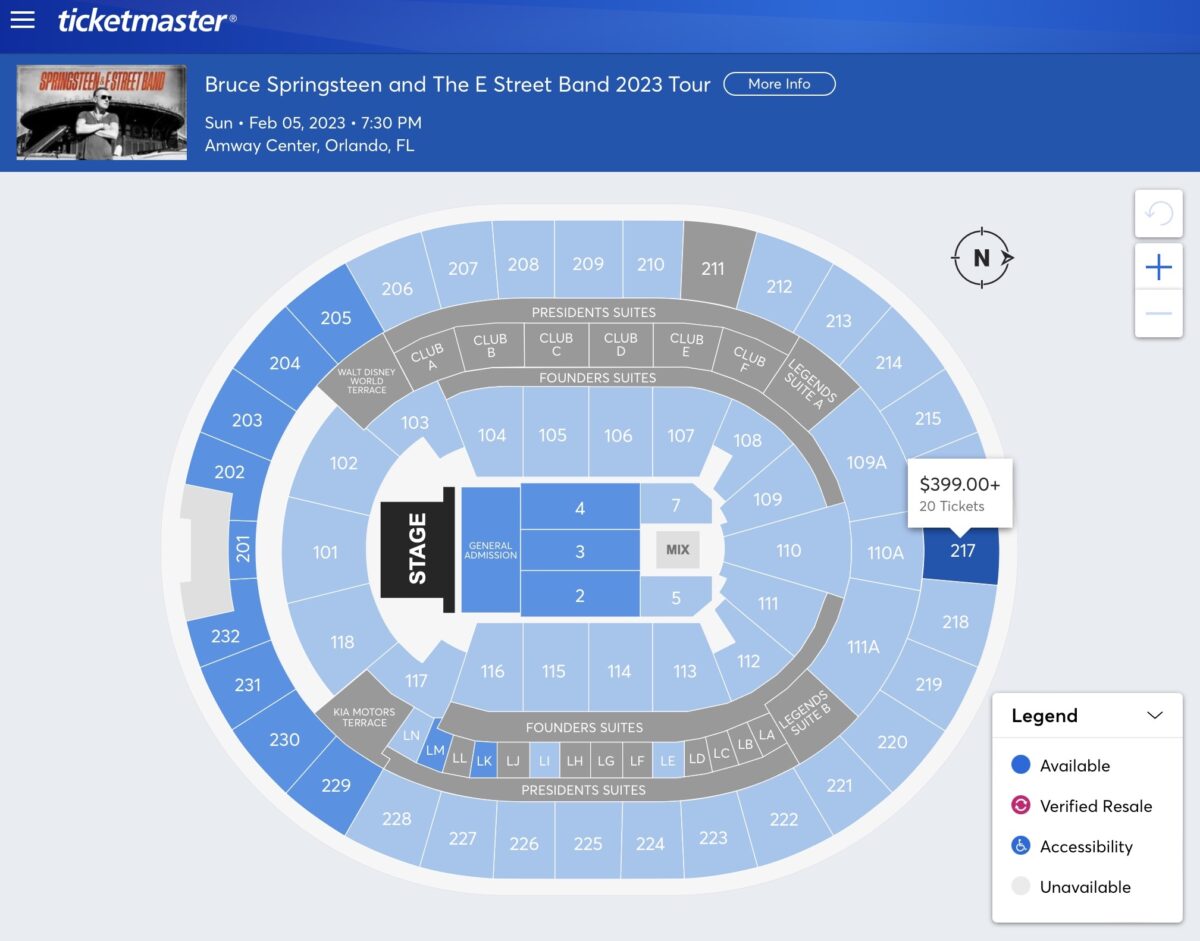 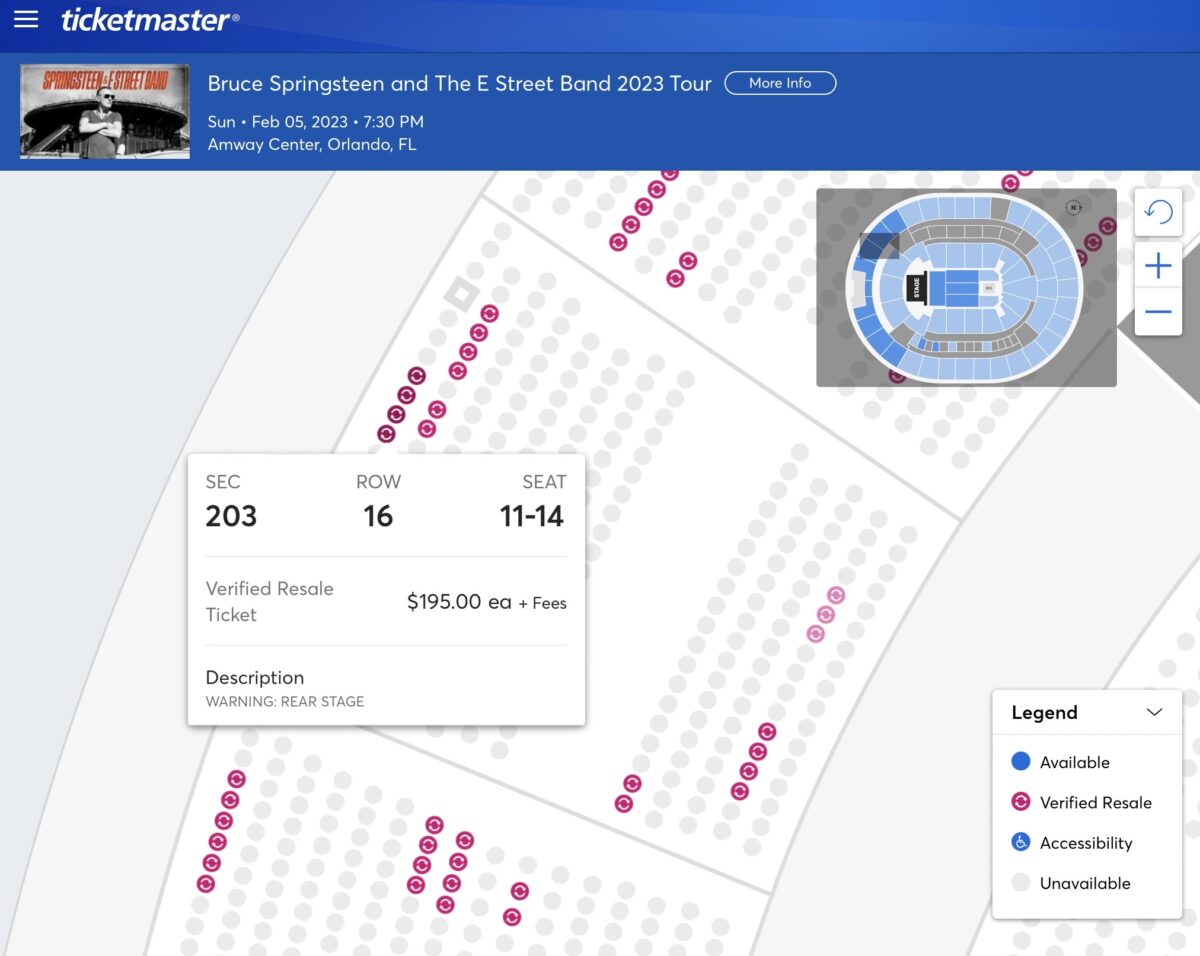 Have a tip we should know? [email protected]