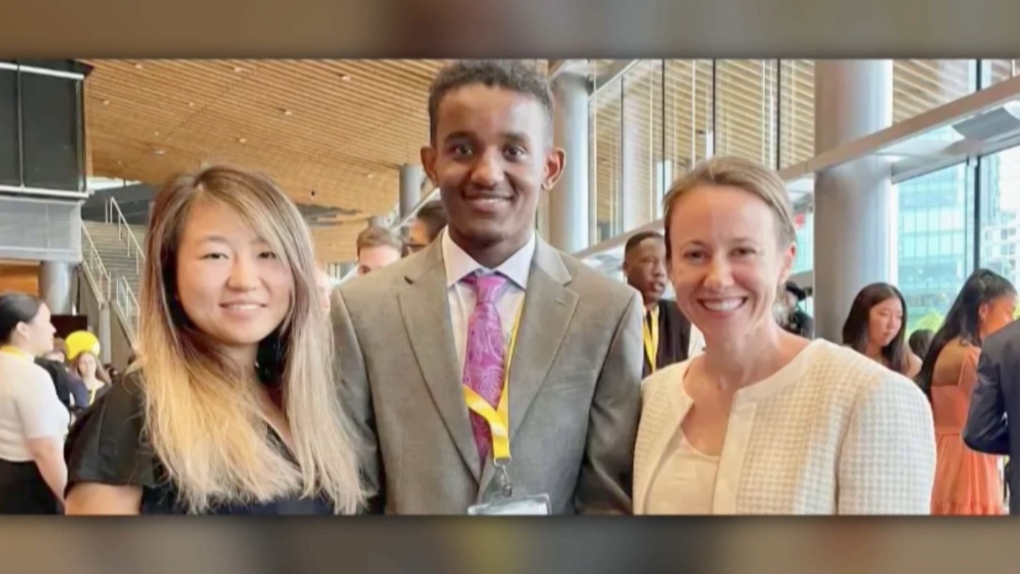 Tributes are pouring in for two teens who lost their lives when a vehicle fleeing police collided with them.

Authorities have not officially released the names of the victims, but friends have identified one of the victims as 18-year-old Samir Ali.

Friends said Ali was driving his friend home from playing soccer Tuesday night when the fatal crash occurred at 10th Avenue and 6th Street in Burnaby.

“The world deserves to know his story,” said Mania Namatifar, who knew Ali through his involvement in youth groups.

Ali had just won this year’s Vistara Elevate Award, earning him a full ride scholarship to UBC to pursue computer science in the fall.

He is a refugee from Kenya and arrived in Canada five years ago.

Namatifar said Ali lived in Vancouver’s Strathcona neighbourhood, volunteering to help those in the Downtown Eastside.

“He was a very strong religious boy who believed in the oneness of humanity. He served his community in the Downtown Eastside, regardless of who he was in the community, ”she said.

Ali was the eldest of eight siblings, and Namatifar said his mother is in agony.

A GoFundMe campaign has now been launched to help the family.

Prior to the crash, Metro Vancouver Transit Police tried to pull over a white sedan. They didn’t specify where or why they were initiating a traffic stop.

They said a few blocks later, the crash occurred.

“In a flash, a white car whizzed past me,” said Samuel Webb. “I’d say he was going like 150 km/h and I didn’t see him apply his brake or anything and just went straight through the light.”

He said Ali and his friend were just going through the intersection at that time.

He got out of his vehicle and tried to save the two teens.

“It was a terrible, horrible thing. I just wish I could have done more to get them out of there and make them be OK right now because they were gone way too soon,” he said.

The Independent Investigations Office of BC, the province’s police watchdog, is now looking into whether a possible police chase resulted in the fatal crash.

When Webb was on scene, he did notice officers arriving quickly.

“I would say it was 30 seconds from the crash and from when I was at the driver’s side door. And at that point, there was a police vehicle in the middle of the street, so I would assume that they were close by when it happened,” he said.

Anyone with dash cam video of the crash is asked to contact MVTP.