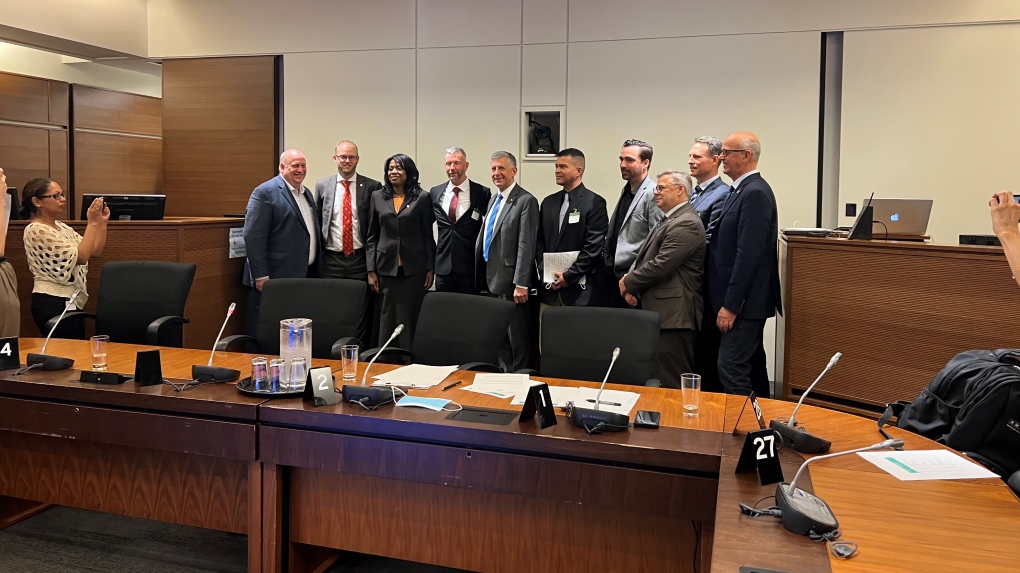 We learned more details Wednesday about a cross-Canada march coming to Ottawa ahead of the Canada Day weekend.

James Topp is protesting pandemic mandates and met with some Conservative members of Parliament, including Renfrew-Nipissing-Pembroke MP Cheryl Gallant, who are sympathetic to his cause.

Topp is due to complete his cross-country journey on June 30 in Ottawa.

“I thank you from the bottom of my heart for responding to this invitation and taking time out of your busy schedules to attend this meeting,” said Topp.

The sit down, which took place inside a House of Commons meeting room, all driven by Topp, a Canadian soldier discharged for speaking out against federal vaccine mandates.

“What I would like to see with the establishment of C3 – the Canadian Citizens Coalition is for us to have further conversations about the way forward, about the way of the future, of what we see Canada being and becoming,” said Topp.

Topp’s cross-country protest is set to end with a celebration in Ottawa on June 30. Protests are also planned throughout the summer by various “Freedom Movement” organizers. Ottawa police will provide an update on their plans for Canada Day on Monday.

The group says they want the government to repeal remaining mandates and reinstate workers who lost their jobs, something the government has already committed too.

They also want pay for workers who lost wages, and to repair what they say is a divide among Canadians.

“This is not the Freedom Convoy part 2, I was inspired by the protest earlier this year,” said Topp.

Among those present with Topp to speak with MPs – Daniel Bulford, Tom Marazzo, and Dr. Paul Alexander, who all played key roles in the Freedom Convoy.

“The pandemic is done, COVID is over, we know that, it’s time end emergency declarations,” said Dr. Alexander.

“James has been to a Civil War, I’m not saying that’s what’s going to happen here, but there’s a lot of similarities if you look at history, we don’t want that, but we’re going down a dark path, Marazzo added.

Over a dozen MPs were present for the meeting, not all stayed until the end, but one had a clear message.

“You have support, you’ve had it all along,” said Saskatchewan MP Jeremy Patzer.

City Manager Steve Kanellakos says the city is working “very closely” with Ottawa police to put a plan in place for Canada Day and any protests over Canada’s birthday.

Mayor Jim Watson, city staff and police will release details on road closures and the policing plan on Monday.

Watson has a message for Canadians planning a trip to Ottawa for Canada Day, but may be concerned about the potential protests.

“My message to people who want to come and celebrate our nation’s birthday is not to be intimated by individuals who may be coming to Ottawa to cause trouble,” Watson said.

“To those people who want to come here to cause trouble, think long and hard about that. This is a celebration of our country, our past, our present and our future. It’s an event for families, for kids, for senior citizens and the last thing anyone will tolerate or put up with is the kind of behavior we saw during the truck rally.

“Bottom line is we want people to come down and have an enjoyable, peaceful time on Parliament Hill and also at LeBreton and throughout the ByWard Market and the downtown core, support our local businesses because they’ve had a tough time. If people are coming to cause trouble, think twice about that. This is not an opportunity for you to use our city as a soapbox for various grievances; let the people of Canada celebrate their nation’s birthday in peace.”