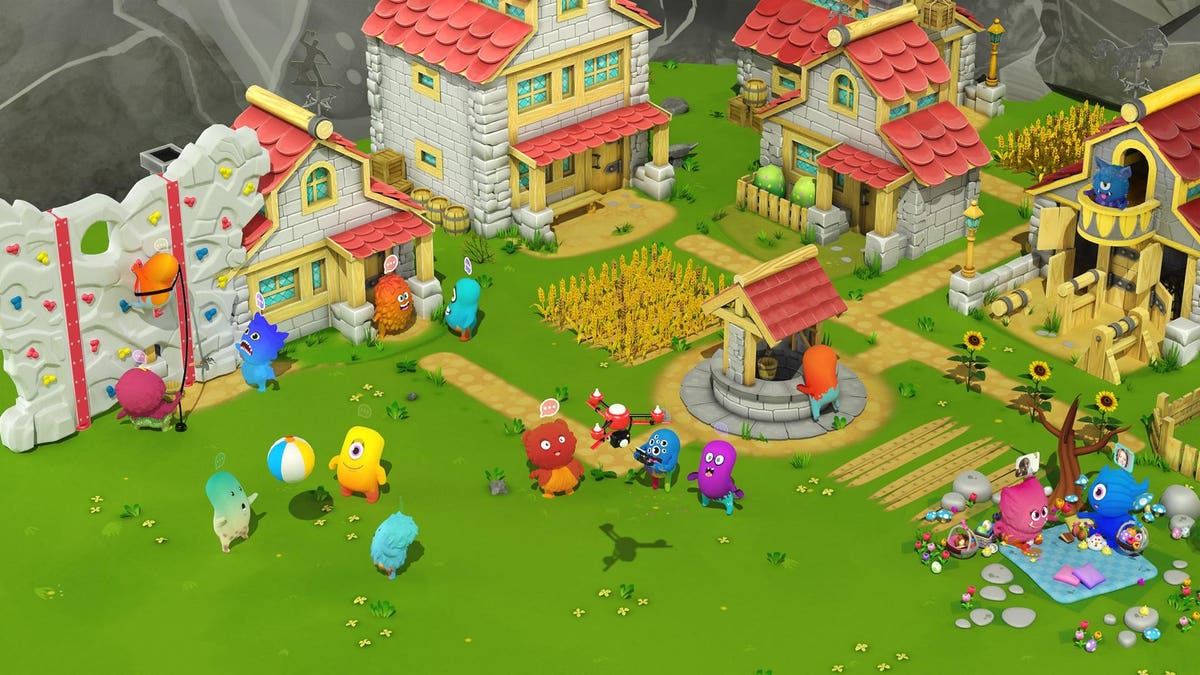 The 11-year-old ed tech unicorn led by Under 30 alumni Sam Chaudhary and Liam Don was quietly valued at $1.25 billion by Tencent last fall as part of its virtual push.

ClassDojo president Liam Don is piloting a small, cuddly-looking monster around a virtual island on his web browser, searching for his employees in a quick game of hide-and-seek. The little island and its friendly monsters are reminiscent of virtual worlds we’ve seen before — Animal Crossing, Minecraft and Roblox all come to mind. But what you have Don so excited isn’t unique graphics or the simple gameplay. It’s what this live demo promises: a virtual environment for kids that parents and teachers will actually trust.

This the future of ClassDojo, the remote-based tech startup Don cofounded with CEO Sam Chaudhary in 2011. The British friends spent the past decade building an app that won over teachers with feedback and lesson planning tools, and then parents with features to communicate and receive updates on their children’s progress at school. Now, they’re pouring their efforts – and $125 million in previously undisclosed funding – into a software environment beyond the classroom.

Unlike other offerings, ClassDojo’s virtual world is intended to be a closed, safe environment in which kids can build and hang out afterschool – all while participating in activities intended to subtly build valuable soft skills like creativity, collaboration and sportsmanship. “We don’t want to turn it into an edutainment thing where we do math games with robots. That’s been done a million times,” says Don. “We want to expand the creative toolset that kids have.”

After testing with tens of thousands of students since late last year, ClassDojo is now unveiling its big new act in time for the upcoming school year, with the goal, according to Chaudhary, of making the company’s virtual space available to at least half of the 51 million kids in active ClassDojo classrooms starting in August. (ClassDojo declined to share how many of those students are themselves monthly active users of its app.)

It’s an ambitious goal. Pull it off, and ClassDojo will likely find itself competing with well-capitalized public companies in a race to control real estate (virtual and figurative) in the digital “metaverse,” from Meta, the parent company of Facebook, to game platform Roblox. But while ClassDojo remains relatively small, with a team of just 110 people and doubling, it’s got real resources of its own. Forbes estimates ClassDojo’s annualized revenue now stands at more than $30 million; in September, it raised a previously-unannounced $125 million Series D funding round led by Tencent that quietly valued the company at $1.25 billion.

And perhaps most valuable: ClassDojo believes it’s already got the real head-start. The startup is used with 95% of US schools today, it claims, and five-plus years of resources to double down on its virtual world amidst a wave of tightening tech budgets. All it needs is for the kids to show up – and stick around.

ClassDojo got its start after Chaudhary, a teacher turned consultant for McKinsey, met Don, a self-taught programmer who had worked as a developer on the RuneScape online game franchise before returning to university to pursue a computer science PhD. Both 25 at the time, and with an entrepreneurial itch, they discovered a common interest in building new technology for educators. Just three months after meeting, the two moved together to California’s Bay Area to attend an education-focused accelerator now part of Y Combinator, called Imagine K12, in 2011.

Focused initially on helping teachers collect student feedback, the duo raised funding from a gaggle of venture capital firms including SV Angel, Shasta Ventures and General Catalyst. They appeared on the Forbes 30 Under 30 list in 2013 and 2014. But for years, as they rolled out to more teachers in more countries, Chaudhary and Don missed one key ingredient for corporate success: sales. As of 2016 inc. profile wondered if ClassDojo’s path to dollars might be to grow into a Netflix-like hub for education content. when Forbes profiled ClassDojo in its magazine in 2017, the company’s offerings reached more than 10 million kids. But it still wasn’t making any money.

“They were very disciplined in being long-term oriented, and highly unclear about what was going to happen from a revenue perspective,” says General Catalyst managing partner Hemant Taneja, who first invested in ClassDojo’s seed round in 2012 and led its Series B four years later. “One thing I really admire about these guys is that they’ve gone at their own pace.”

When ClassDojo did finally start charging for its software in 2019, it did so through a premium version of its app called ClassDojo Plus, which today costs $7.99 per month or $59.99 per year and provides more detailed progress reports, extra content and additional family accounts. Most families stuck to the free version. But with a small team of about 30 and a low rate of spending, ClassDojo reached positive cash flows in just four months, it told TechCrunch. (The company says it is losing money as it invests in growth, by choice, today.) During the pandemic’s lockdown the following year, as the company raised a $30 million funding round led by solo capitalist Josh Buckley, sales more than doubled. (ClassDojo declined to provide its revenue numbers, but said they have doubled or tripled each year.)

As early as the fall of 2020, however, before they’d announced their fundraise from Buckley, Chaudhary and Don were privately discussing a new vector of growth for ClassDojo: virtual spaces. Roblox, the digital game platform, grew its daily user base 85% that year to more than 32 million people, more than half of them kids under the age of 13, per its filing for its March 2021 IPO. Kids were already used to remote learning, even if sometimes reluctantly, over Zoom or other rival tools. ClassDojo’s founders were convinced that even if the remote-first world of that moment didn’t last, it would be replaced by a hybrid mix of in-person and digital learning for the long run.

Building a virtual environment from scratch would be no small effort, but Don and a small team got to work. When they presented early progress to ClassDojo’s board in spring 2021, the startup’s directors were convinced ClassDojo had finally found its next act worthy of a big swing. They recommended Chaudhary raise more funding to pick up the pace. Last summer, Chaudhary quietly met with growth capital investors; in September, the startup raised $125 million, more than it had raised combined over the previous ten years. The round, which made ClassDojo an unannounced unicorn, would allow a hiring binge that plucked managers from DreamWorks, Roblox and Disney, from which it poached Lane Merrifield, formerly the cofounder and CEO of pioneering kids’ social network Club Penguin, this spring.

“Everyone saw how crazy an opportunity was ahead of us,” Chaudhary says. “It was entirely about, if we think there’s a better future, we should go and build it, and we should move fast.”

just how to virtual Montessori world like ClassDojo’s fits into modern education is still being worked out. Some prominent researchers are optimistic – within limits. “Folks in the field of education technology realize that it’s not the technology that causes learning, it’s the instructional methods,” says Richard E. Mayer, Distinguished Professor of Psychology at the University of California, Santa Barbara and an author on books on multimedia and game-based learning. Mini games, such as the hide-and-seek Don played with his ClassDojo colleagues, have demonstrated success in improving attention spans and cognitive skills, Mayer says, more so than entirely unstructured environments like Minecraft. “Completely open-ended sandboxes, I don’t think kids have the meta-cognitive skills to really know what’s the most productive thing to do in them,” he adds.

Marc Brackett, director of the Yale Center for Emotional Intelligence and a professor at the university’s School of Medicine, largely agrees. “If designed well, I think [a virtual environment like ClassDojo’s] provides yet another space and another opportunity for children to practice skills that they can also practice on the football field, or in the playground,” Brackett says. “But this is a playground where people are going.”

But both acknowledge that there are limits to onscreen activity before it veers into unhealthy behavior. And even proponents like former teacher Vriti Saraf, now the CEO of web3 company K20 Educators, which offers a “metaverse hub” for teachers, see such tools working at their best to offer an experience that in-person instruction could not. (Think watching glaciers melt, or learning alongside pen-pal style classmates at schools thousands of miles away.) “It would be ridiculous for us to go into a ‘Ready Player One’ dystopian future where we spent all of our time online,” says Saraf. “That’s terrible for human development.”

Yes, there’s a web3 angle with ClassDojo, too. After ClassDojo rolls out its virtual world to students this fall, the company plans to eventually open up its virtual world, carefully, for creators and developers to build on top — one way it could make money from the free service, Chaudhary says, alongside potentially charging for premium digital items for kids’ monster avatars.

The playbook sounds reminiscent of Roblox, which built its business off fostering a creator economy for developers, and which announced in November a bold goal to have 100 million students on its own education platform by 2030. Roblox is still far bigger than ClassDojo, though recent concerns about how kids use its platform has opened up a natural target for ClassDojo to market itself to parents against, says John Freeman, an analyst at CFRA Research. “It’s a great initial sales pitch, that Roblox has scary stuff in it,” he says. He’s more skeptical Roblox can’t provide just-as-good safety controls of its own.

Then there’s Meta, which has pledged $150 million to support creators on its own virtual reality-focused “metaverse” and signed partnerships with online course providers edX and Coursera, though its reach remains limited today by a strategic focus on costly virtual reality hardware. Microsoft, which is in the process of acquiring games giant Activision and already owns Minecraft, looms as a dark horse. In a battle of giants, ClassDojo will need to avoid getting squashed. “[ClassDojo] will say they have a first-mover advantage, and the others will have the resources to figure it out. Maybe they buy this company if there’s some unique technology,” says Wedbush analyst Michael Pachter.

In a startup environment that has seen others slow down or struggle to raise more funds, ClassDojo plans to throw its weight around, too. The company made one small acquisition early this year of a Y Combinator alumni company focused on Latin America called Prendea. The company’s working with Jonathan Mildenhall, Airbnb’s former marketing chief, on a design overhaul that will likely see it drop the “Class” from its name for a sleeker, less schoolroom-focused “Dojo.” (ClassDojo declined to comment on a name-change. But in an interview, Chaudhary conceded “there may be some plans to that effect.”)

None of that matters as much, of course, if ClassDojo’s virtual world fails to take off. Chaudhary and backers like Buckley and GSV Ventures founder Michael Moe argue that by building a network of teachers, parents and students already, the startup has already cracked the hardest part.

As Under 30 investor Meagan Loyst of Lerer Hippeau puts it: “Kids dress up as the [ClassDojo] monsters for Halloween. You can’t say that about a lot of education companies.”