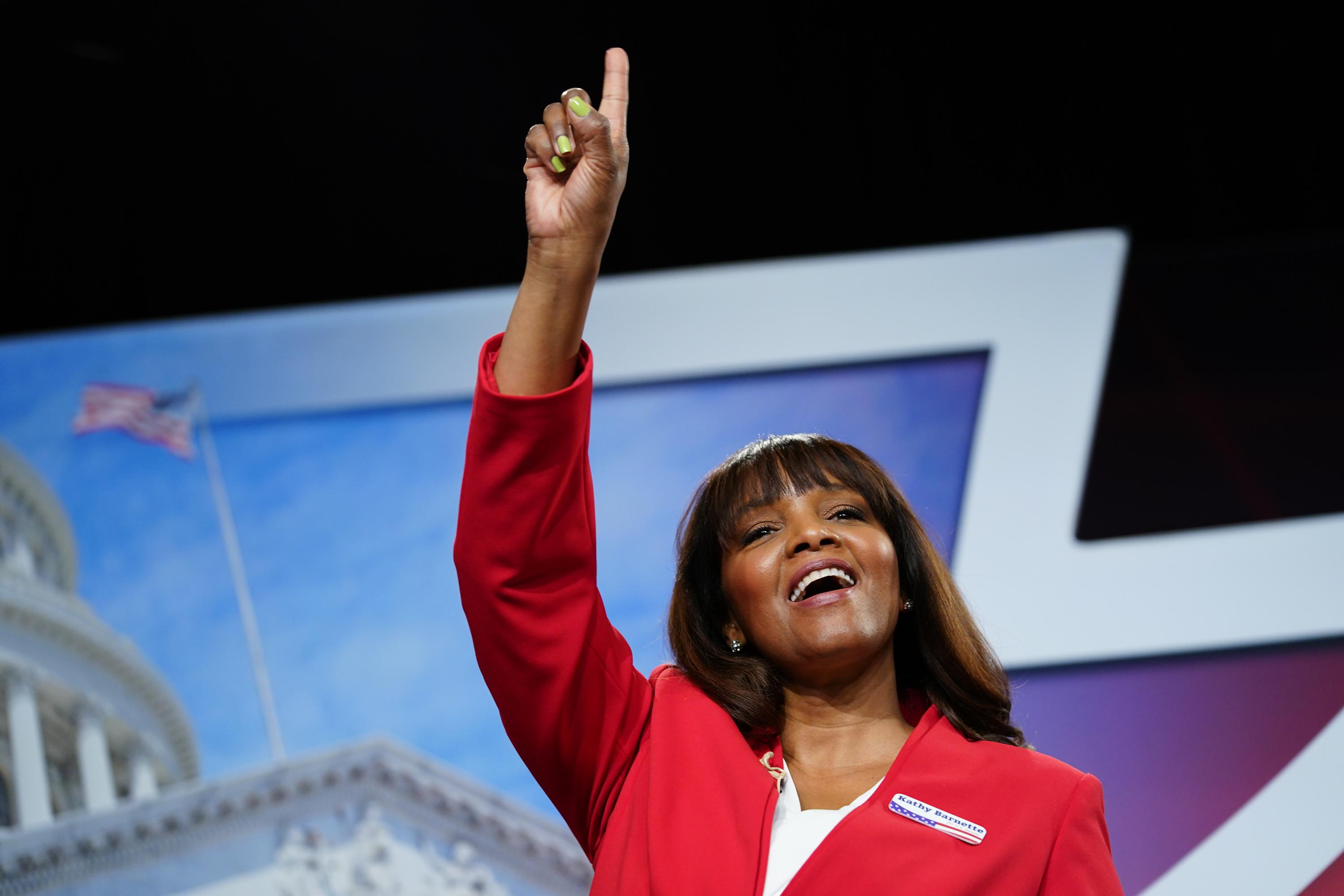 The anti-tax Club for Growth endorsed Barnette on Wednesday and has begun airing TV ads on her behalf. That follows the anti-abortion Susan B. Anthony List’s decision on Tuesday to back Barnette over Oz.

The endorsement by Susan B. Anthony List is timely, with abortion in the headlinesand its backing of Barnette highlighted the story she has told of being the outcome of a rape when her mother was 11.

“Kathy is a courageous advocate for life who exposes the human cost of abortion,” Marjorie Dannenfelser, the president of the Susan B. Anthony List, said in a statement.

It’s unclear whether the endorsements and advertising will be enough to carry Barnette to the top of the field in Pennsylvania’s May 17 primary.

The Club for Growth, for instance, unleashed millions of dollars in advertising against Trump-backed JD Vance in Ohio’s GOP Senate primary earlier this month only for the “Hillbilly Elegy” author to go on and win the race by an eight-point margin.

But the growing focus on Barnette suggests anxiety among some conservative and pro-Trump circles that Oz doesn’t sufficiently reflect their views on abortion, guns or the culture wars the GOP is waging against Democrats.

An Oz loss next week would mark another setback for Trump after his preferred candidate for governor was defeated in Nebraska’s Republican primary on Tuesday.

Trump remains the most popular figure among Republican voters and his endorsement helped pull Vance to victory in the final weeks of the Ohio campaign. Both Trump-backed congressional candidates also won in West Virginia’s primary.

The poll found 22% of GOP primary voters supported Oz with former hedge fund CEO David McCormick and Barnette bunched together at 20% and 19%. About one-fifth of voters, or 18%, said they were undecided.

If elected, the 50-year-old would be the first Black woman Pennsylvanian sent to the US Senate.

She came into the race with little name recognition or money, but gained support among some right-wing groups by campaigning with allies of Trump’s baseless conspiracy theories that Democrats stole the 2020 election in Pennsylvania.

In recent years, she has become a speaker for anti-abortion causes, penned a memoir about being Black and conservative, ran unsuccessfully for a congressional seat in a Democratic-leaning district in suburban Philadelphia and gained a platform as a guest on conservative news shows .

Until recently, Pennsylvania’s Senate race has been primarily an expensive duel between Oz and McCormick. Both candidates and the super PACs that support them have reported spending more than $50 million and have blanketed Pennsylvania’s airwaves with TV ads.

McCormick, who has substantial establishment connections going back to his service in former President George W. Bush’s administration, has received backing from various Trump administration figures and will close the campaign with Texas Sen. Ted Cruz stumping across Pennsylvania for him.

But McCormick suffered a damaging blow when Trump attacked him at a Friday rally for Oz, calling McCormick the “candidate of special interests and globalists and the Washington establishment.”

Trump did not mention Barnette. McCormick and Oz have largely stayed quiet in public about Barnette, who has raised and spent a fraction of their money on her.

But Barnette has criticized both as carpetbaggers and “globalists,” slammed Oz as a liberal and taken aim at what she called the GOP’s habit of electing “the richest person.”

She also has dismissed Trump’s endorsement of Oz, saying Trump’s Make America Great slogan, or MAGA, “does not belong to President Trump. MAGA, although he coined the word, MAGA actually belongs to the people.”

The other major race in Pennsylvania, for its open governor’s office, is also volatile for Republicanswith party leaders and movement conservatives fearing that a far-right candidate will win it.

That candidate, Doug Mastriano, and Barnette often campaign together, along with key figures in Trump’s circle who have spread denialism about the 2020 election, including Trump’s former national security adviser, Michael Flynn, and lawyer Jenna Ellis.