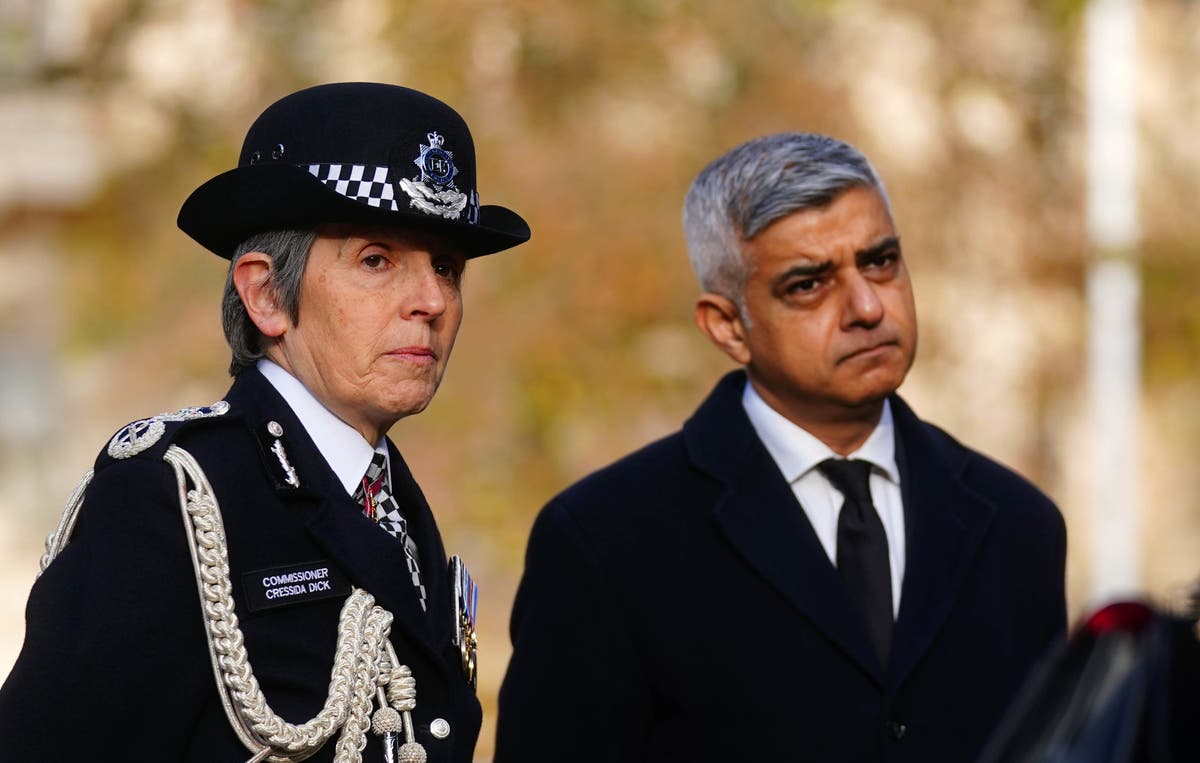 ame Cressida Dick “felt intimidated” into quitting as the head of the Metropolitan Police and was effectively “constructively dismissed” from her role by the Mayor of London, a report has found.

The then commissioner of the UK’s biggest police force faced “political pressure” from Sadiq Khan, according to a review of the circumstances surrounding her resignation by ex-chief constable of constabulary Sir Tom Winsor.

But Mr Khan disputed the findings, saying the report by the former boss of the police watchdog Her Majesty’s Inspectorate of Constabulary and Fire and Rescue Services (HMICFRS) was “clearly biased and ignores the facts”.

She felt intimidated by this process into stepping aside, and I can understand that

Dame Cressida dramatically quit from the role in February after Mr Khan made clear he had no confidence in her plans to reform the force, prompting deputy Met commissioner Sir Stephen House to write to the Home Secretary “expressing grave misgivings” that due process had not been followed.

She left her post in April and two months later the Met was put into special measures by the HMICFRS.

Sir Mark Rowley is due to take over as commissioner this month.

In his report, published on Friday after being ordered by Priti Patel, Sir Tom said: “In my view, in this case, the commissioner faced political pressure from the mayor to resign, that pressure being of a character and intensity which was effectively his calling on her to leave office, outside the established statutory procedure and contrary to the wider legislative scheme.”

He found “none of the statutory steps set out in section 48 of the Police Reform and Social Responsibility Act 2011” were followed, saying Mr Khan, through his chief of staff, gave her an “ultimatum” on February 10, adding: “If the commissioner did not attend a meeting and convince the mayor that his plan of February 4 2022 would be improved, he would make a statement to the media.

“That statement would make clear that he no longer had trust and confidence in the commissioner, and that he intended to start the statutory process for her removal.

“When the commissioner did not attend that meeting, the mayor’s chief of staff reiterated the mayor’s position and gave her less than one hour to decide what to do.

“She felt intimidated by this process into stepping aside, and I can understand that.”

Sir Tom, who stepped down from his post leading HMICFRS in March, concluded “due process was not followed” and although the commissioner is not an employee of the mayor, “she was in effect constructively dismissed by him”.

Sir Stephen welcomed the “thorough and impartial report”, while Dame Cressida, describing it as a “highly detailed and forensic account”, said: “I regret this report was necessary but I hope it will help create a sounder foundation for my successors. ”

She added: “At all times I sought to uphold the law and act ethically and with goodwill, professionalism, openness and trust.

“I fully respect the need for democratic oversight of policing.

“It is also important that politicians respect due process and do not break the rules.

“I hope this report is an opportunity for others to reflect on how City Hall functions and is held to account.”

But Mr Khan hit back, saying: “Londoners will be able to see that this review is clearly biased and ignores the facts.

“On the former commissioner’s watch, trust in the police fell to record lows following a litany of terrible scandals.

“What happened was simple, I lost confidence in the former commissioner’s ability to make the changes needed and she then chose to stand aside.

“Londoners elected me to hold the Met commissioner to account and that’s exactly what I have done.

“I make absolutely no apology for demanding better for London and for putting the interests of the city I love first.

“I will continue working with the new commissioner to reduce crime and to rebuild trust and confidence in the police.”

“Public confidence in the Met has been dented by a series of appalling incidents and it is vital that failings are addressed and professional standards restored to the level that Londoners deserve.”

Lawyer Amanda Lennon said Ms Dick may have had a case for harassment against Mr Khan over his “aggressive” public handling of their disagreements before she resigned, but she is likely to have come to a private agreement which rules out any chance of pursuing this.

The employment law specialist at Spencer West said Ms Dick would not be able to bring a case for constructive dismissal because the three-month window within which a claimant must do this has passed.

Ms Lennon told PA: “He (Mr Khan) apparently gave her an ultimatum in February that if she didn’t improve her plan, he would give a statement to the media. That is very aggressive.

“It highlights what he sees to be her incompetence, in the media. That’s pretty serious if that’s what’s happened.”