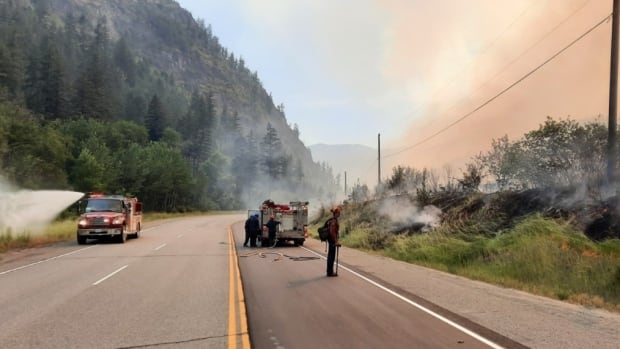 Crews are literally fighting fire with fire in the southern Okanagan as the BC Wildfire Service takes advantage of cooler weather to try to contain a blaze that has forced hundreds from their homes.

Fire information officer Marg Drysdale told a news conference Wednesday that crews were conducting controlled burns on the southeastern flank of a wildfire burning southwest of Penticton, which the BC Wildfire Service says grew by more than 50 per cent on Wednesday.

An aerial ignition was planned for the region as crews burned off trees and bush not far from Highway 3A, which was closed briefly on Tuesday as flames moved closer.

“It will be highly visible,” Drysdale said of the planned burn aimed at creating containment lines around the flames.

Days of searing heat and low humidity helped fuel the wildfire after it was sparked July 29, but Drysdale said winds Wednesday were “not much of a factor” and “pretty flat,” while the heat was “a couple of degrees cooler, ” at higher elevations.

Environment Canada was calling for temperatures to drop by almost 10 degrees in the Penticton area from the low 30s recorded Wednesday to expected highs of no more than 23 C on Thursday and Friday.

The Regional District of Okanagan-Similkameen confirmed 479 properties, including the Apex Resort village west of Keremeos, remained evacuated, while residents of another 324 properties in the area were on evacuation alert.

Two hundred and fifty-two firefighters were assigned to the wildfire, said Drysdale, backed by 10 helicopters and four pieces of heavy equipment, with additional heavy equipment set to be assigned in the coming days.

The south Okanagan fire is among six now listed by the wildfire service as either highly visible or a threat to public safety, up from just two so-called “wildfires of note” a day earlier.

The blazes newly identified as “fires of note” include a 10-square-kilometre fire northwest of Cache Creek in the Kamloops Fire Center and another that had burned roughly two square kilometers northwest of Kamloops.

There are also two in the Southeast Fire Center, one covering nearly 17 square kilometers between Kaslo and New Denver and the other south of Cranbrook, which was sparked Aug. 1 and had burned five square kilometers by Wednesday.

The wildfire service warned that activity on that suspected lightning-caused blaze was expected to pick up late in the day as winds increased and a cold front moved in.

Conair Group Inc. confirmed by email that one of its plans was involved in a forced landing while battling the Cranbrook-area wildfire Tuesday.

“We are happy to report that following the forced landing of our Fire Boss Airtanker yesterday, the pilot was able to walk away from the aircraft to a suitable helicopter landing site for a flight back to Cranbrook,” said Conair communications manager Shannon De Wit .

Conair is working with the BC Wildfire Service, Transportation Safety Board and Transport Canada on the investigation,” she said and continues to provide contracted aerial firefighting to the wildfire service.

The wildfire service said roughly three-quarters of BC’s active wildfires were caused by lightning, while 11 per cent are linked to human activity.

One unoccupied cabin has been destroyed southwest of Penticton, and numerous structures were lost in the early days of the wildfire west of Lytton, but there are no reports of losses related to any other wildfires in BC

Across BC, 154 new wildfires broke out in the past week — many sparked by thousands of lightning strikes on the weekend, according to the wildfire service’s dashboard. Nearly half of the new fires were sparked in the Kamloops Fire Center region.

Another significant wildfire in the Interior, the 37-square-kilometre Nohomin Creek fire northwest of Lytton, is still growing “steadily” in steep, rocky terrain.

Three other fires have been upgraded to fires of note, meaning they are highly visible or pose a potential threat to public safety: