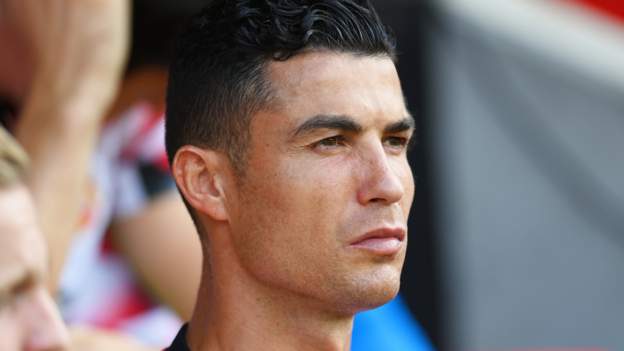 On 27 August 2021, Manchester United confirmed the return of their prodigal son.

Just over 12 months later and United’s relationship with Cristiano Ronaldo has changed beyond all recognition. And Erik ten Hag needs to manage it very delicately.

At the King Power Stadium on 1 September, the 37-year-old started on the bench and came on for the final 22 minutes of the 1-0 win at Leicester.

His most significant contribution was an acrobatic overhead kick that bounced wide of the far post.

In five appearances so far this season, the brilliant Portuguese has not managed a goal or an assist.

Ronaldo’s Old Trafford return followed days of intense speculation, first about a move to Manchester City, before United declared their interest and Sir Alex Ferguson spoke to the player who regards the Scot as his footballing father.

The tweet in which United declared “Welcome home, Cristiano” was liked 1.9 million times. The club added an additional one million followers on Instagram within two hours of the signing being announced.

Two days later, United beat Wolves away from home. Two weeks after that, amid joyous scenes from the moment he arrived at Old Trafford to the second he left, Ronaldo scored twice on his debut, the 4-1 win against Newcastle propelling his new club to the top of the Premier League.

Yet there were red flags before Ronaldo’s return. And not long afterwards, some were starting to wonder if United had done the right thing.

Manager Ole Gunnar Solskjaer did not go into the 2021-22 season with the perfect squad. But he was starting to get close to his ideal team.

Jadon Sancho had been brought in as the wide, attacking player he craved. Weeks persuading Edinson Cavani to remain at Old Trafford reached fruition in May when the Uruguayan signed a one-year extension.

Raphael Varane had joined from Real Madrid to become the latest defender to try and secure United’s leaky backline, although some wondered whether he was actually the leader they needed given the amount of time he had spent playing alongside Madrid captain Sergio Ramos.

The defensive midfielder Solskjaer wanted had not been delivered but not even City’s Pep Guardiola gets everything he wants.

Ronaldo’s arrival changed the entire dynamic. His only effective position of him could be as a number nine. At a stroke, that significantly reduced the number of games Cavani was likely to play, quite aside from the fact the Uruguayan had to give his shirt number over.

For someone who would have moved away without Solskjaer’s intervention, it was a humbling experience. Little wonder, his contribution from him last season was fitful.

It also meant United’s other “number nine” Mason Greenwood was moved into a wide position to compete with Sancho. At the point where Greenwood became unavailable for selection due to off-field issues, he had started 16 Premier League games compared to Sancho’s 10.

Ronaldo could not play the high tempo game Solskjaer was looking to introduce so a compromise in playing style was made.

Solskjaer did have a plan to leave Ronaldo out of his team occasionally. However, the first time he did it, against Everton on 2 October, the debate around the move was immense even though it was only three days after a Champions League away game.

The Norwegian said afterwards he had to “pick the right moments” to use Ronaldo. He started all seven matches after that until Solskjaer was sacked on 21 November.

The only times he was left on the bench for the remainder of the Premier League campaign were at Chelsea on 28 November, when Michael Carrick made the decision, and Burnley on 8 February.

Ronaldo’s appearance at Turf Moor was overshadowed by the fact he ignored the traveling fans at the final whistle and walked straight to the United dressing room at the other end of the pitch.

It was on 18 April that Ronaldo and his girlfriend announced the death in childbirth of their baby boy. Ronaldo played – and scored – against Arsenal the following weekend, having missed the 4-0 defeat at Liverpool. On 7 May, United were beaten 4-0 at Brighton to end any hope of qualifying for this season’s Champions League.

Subsequently, Ronaldo missed the final game of last season due to injury, as well as United’s pre-season tour of Thailand and Australia for personal reasons. By the time he did appear in the Old Trafford friendly with Rayo Vallecano on 31 July, his desire to move away from United was well known.

The reasons, it was established, were career oriented. He still wants to compete for major honours. The opportunity of doing that at United, it was felt, was a mirage.

Yet the expected offers did not materialize. There was one from Saudi Arabia but that was rejected. The latest rumors concerned Atletico Madrid, Napoli and Ronaldo’s first professional sporting club, Sporting Lisbon. But when the deadline closed across Europe’s major leagues, Ronaldo remained at United, his own status weakened considerably from where it was when he returned.

That Ronaldo has been on the bench for more Premier League games this season than he was for the whole of last and there has been barely a murmur of opposition tells its own story.

Ten Hag is in a far stronger position to deal with the five-time Ballon D’Or winner than either Solskjaer or his interim replacement Ralf Rangnick were.

Solskjaer publicly declared his support for Ronaldo’s return. But really, he had no choice.

It was determined among United’s powerbrokers that the thought of Ronaldo turning out for Manchester City was too much to accept. Even at his age, the combination of the former Real Madrid man’s output—he had finished the previous season as top scorer in Serie A—and commercial pulling power was irresistible.

It never came to that but the chances are, if Solskjaer had challenged the transfer, his concerns would have been ignored.

Ten Hag is in a completely different position. Rather than the Dutchman finding a system that fits Ronaldo, Ronaldo has to fit in with his. If that means appearances off the bench and starting games in the Europa League – a competition the 37-year-old has never played in – until the World Cup, that is how it will have to be.

The chances are Ten Hag will handle the situation more subtlety.

Asked after the Leicester game if it was possible one of the greatest players ever was about to be reduced to the status of bit-part player, Ten Hag replied: “It’s really early in the season and we have a squad. We have more than 11 starting players, that is what you see now, players now on the bench can play in one, two or three weeks.”

Ten Hag must also work to lift Ronaldo’s mood. While BBC Sport was told only the player’s exit could completely lift the negativity that surrounded the club, the words were uttered in the belief that parting of the ways was possible. In the end, that has not happened.

Efforts to absolve Ronaldo of all blame from last season’s catastrophic ending have been dismissed by United sources. But in truth, still no-one can really know whether Ronaldo was the reason United weren’t even worse than they ended up being last season, or if he was one of the chief reasons for their poor form.

Now though, for the first time since he arrived at Old Trafford as a raw teenager, Ronaldo has to prove himself.

Can he be a team player, something his individual brilliance meant he never needed to bother about too much for so long?

Can he maintain the facade of being supportive of his team-mates from the bench?

Can, at 37, Ronaldo once again deliver goals for a team that puts a premium on pressing the opposition?

It is 10 weeks until the Premier League breaks for the World Cup. It doesn’t start again until 26 December, a week before the January transfer window opens.

Most people, probably including the man himself, didn’t anticipate Ronaldo spending that time as a Manchester United player.

How he handles it will be fascinating.