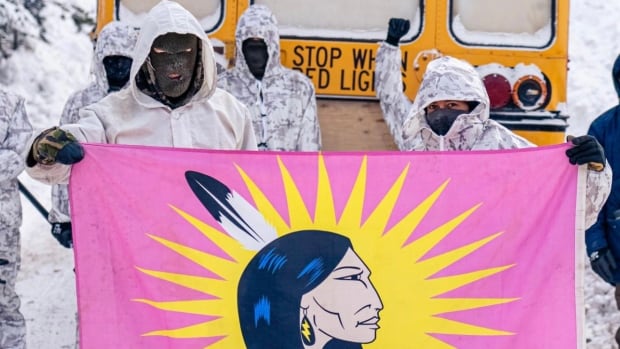 The BC Prosecution Service plans to prosecute 15 protesters for criminal contempt for allegedly defying an injunction protecting construction of a controversial pipeline in northern British Columbia.

Prosecutor Trevor Shaw said the Crown has decided not to charge two of the 27 individuals who were arrested over a period of six days between September and November 2021.

It’s the first time the legal conflict between Coastal GasLink and supporters of Wet’suwet’en hereditary chiefs who claim the pipeline infringes on their traditional territory has escalated into the area of ​​criminal contempt — which involves public defiance of a court order.

Church has twice before asked prosecutors to consider criminal contempt charges against protesters accused of defying an injunction she issued to Coastal Gaslink in 2019 protecting access to the pipeline work site.

In both previous cases, the Crown decided prosecution was not in the public interest, but declined to say exactly why.

Frances Mahon, the lawyer who represents 14 of the 15 protesters now charged with criminal contempt said her clients were disappointed by the Crown’s decision.

“But we are prepared to fully defend against these allegations. We’ve got defenses prepared and we are ready for trial,” Mahon said.

“I know my clients are very eager to have this move forward as quickly as possible.”

Shaw told the judge Crown counsel made the decision this time after applying “both the evidentiary and the public interest tests” found in their polices for charge assessment relating to civil disobedience.

He said the Crown worked closely with the RCMP to obtain evidentiary material and considered correspondence from the BC Union of Indian Chiefs as well as a lawyer who represents more than a dozen of the protesters.

The Crown is expected to announce on July 7 whether it will charge 10 more protesters with criminal contempt — including Sley’do, also known as Molly Wickham, who is one of the key leaders in support of the Wet’suwet’en hereditary chiefs.

Shaw said the Crown needs more time to consider the evidence and the law before making a decision on Sley’do and the others. He said prosecutors decided not to bring criminal charges against two defendants for evidentiary reasons.

The prosecutor said one of the key considerations was the way in which the terms of the injunction were presented to the protesters because a previous case in which RCMP paraphrased the order had led to an acquittal.

Coastal GasLink obtained an interlocutory injunction in 2019 blocking anyone from “physically preventing, impeding, restricting or in any way physically interfering” with access to the road which leads to the company’s work site.

‘The concept of public defiance’

The case highlights the difference between civil and criminal contempt — as well as land title questions driving protests against the Coastal GasLink project.

If completed, the pipeline will span 670 kilometers from near Dawson Creek in the east to Kitimat on the Pacific Ocean.

The company has signed benefit agreements with 20 band councils along the project’s route. But Wet’suwet’en hereditary leadership says band councils do not have authority over land beyond reserve boundaries.

The difference between civil and criminal contempt of a court order is spelled out in a 1992 Supreme Court of Canada decision that says the distinction lies “in the concept of public defiance that accompanies criminal contempt.”

“The Crown must prove beyond a reasonable doubt that the accused defied or disobeyed a court order in a public way with intent, knowledge or recklessness as to the fact that the public disobedience will tend to depreciate the authority of the court,” says the ruling on a dispute between the United Nurses of Alberta and Alberta’s Attorney General.

Martin Peters has represented protesters in both the Coastal GasLink dispute and in relation to members of the Gitxsan Nation arrested for blocking a rail line in solidarity with the Wet’suwet’en.

He says he thinks the Crown assesses each criminal contempt charge on its own merits.

In the case of the Gitxsan rail blockade, prosecutors said charges against only three of 12 protesters had a “substantial likelihood of conviction” — the standard required by BC’s Crown Prosecution Service — but decided it wasn’t in the public interest to prosecute them.

“As to what’s in the public interest, I don’t know how to unpack that,” Peters says.

He doesn’t believe the government has an “agenda” but says a lot of people — including companies who believe “they’re effectively in business on behalf of the public” — would like to know what the “public interest” means.

Peters says none of his clients wanted to be prosecuted for criminal contempt, but all were ready to defend themselves.

“In effect, they’re prepared to up the ante, and say, ‘Yeah, but this is our land. Don’t come along and tell us that you make a court order that we can’t be on our land. That’s something that we’re prepared to litigate for a very long time,'” he says.

‘These underlying issues are about land title’

Gwich’in lawyer Kris Statnyk, an advisory board member of the Toronto-based, First Nations-led research centre, says the numbers speak to a “proliferation of the injunction as a tool to remove Indigenous people from opposing these projects.”

Statnyk says the mystery of what’s in the “public interest” sidesteps questions like how BC’s commitment to the United Nations Declaration on the Rights of Indigenous Peoples might factor into the Wet’suwet’en conflict.

“Really, these underlying issues are about land title and that’s where government has its obligation,” Statnyk says.

“They need to step up and not just stay in the weeds.”

In the case of the Gitxsan protesters, the judge concluded criminal contempt charges could still be considered — despite the Crown’s position — but earlier this year CN Rail said it wouldn’t pursue the matter.

Peters says the question of a judge bringing a criminal contempt charge against protesters irrespective of the Crown remains a “live issue” in the case because it will invariably involve upholding the rule of law.

“And that’s a very big question as to what the rule of law includes,” he says.