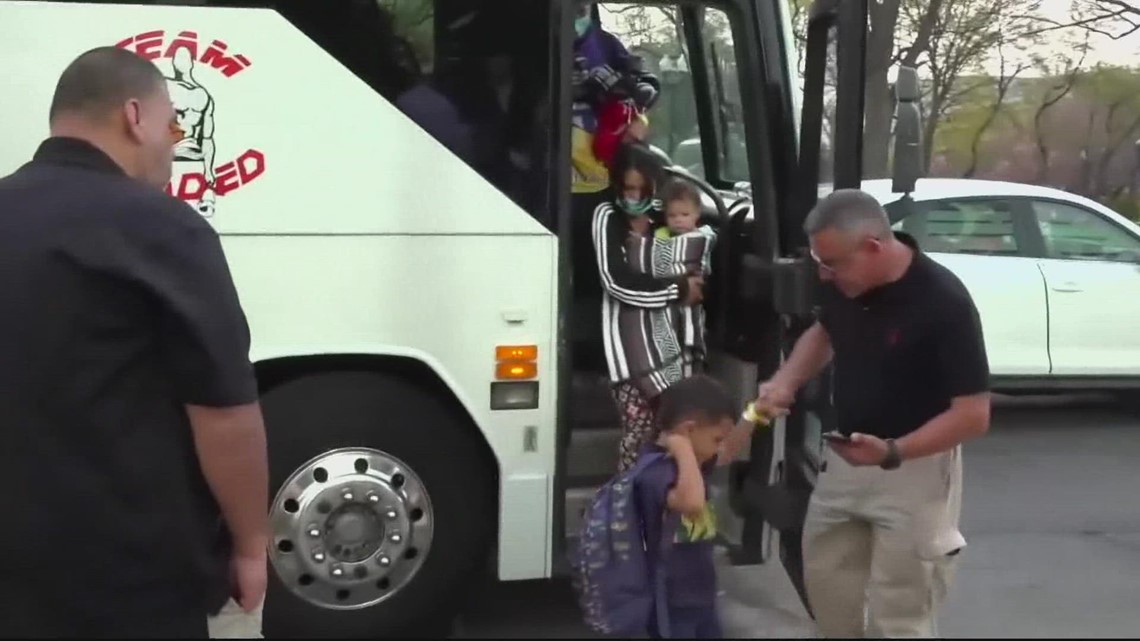 In a letter, the major references recent instances of Texas Gov. Greg Abbott and Arizona Gov. Doug Ducey announcing they would bus migrants to DC

WASHINGTON — DC Mayor Muriel Bowser is asking for the District’s National Guard (DCNG) unit to be activated, to help prevent a “prolonged humanitarian crisis” of people seeking asylum in the capital.

A letter, sent on behalf of the mayor by the Director of the Homeland Security and Emergency Management Agency Dr. Christopher Rodriguez, referenced recent instances of Texas Gov. Greg Abbott and Arizona Gov. Doug Ducey announcing they would bus migrants from the southern border to Washington, DC

RELATED: Asylum seekers say they are stranded at Union Station after being bused in from Texas

The transportation efforts were done in defiance of the Biden Administration’s pledge to lift former President Trump’s pandemic restriction policy, Title 42, which reduced the number of migrants entering the United States, according to the letter. It went on to specify that, over a span of nearly four months, the nation’s capital has encountered more than 4,000 individuals arriving on nearly 200 buses.

WUSA9 also reached out to both governors. They said more than 7,000 asylum seekers have voluntarily boarded buses to DC so far. Texas shared 6,100 people have headed to the capital on 155 buses. Arizona confirmed 1,262 people on 33 buses.

RELATED: ‘A lie’ | Some migrants say they’re being bused to DC under false pretenses

Rodriguez also shared that the city has supported multiple NGOs caring for arriving migrants, as well as facilitated nearly $1 million in FEMA grants for the lead NGO’s staffing, facilities, and transportation. However, in the last month, “the pace of arriving buses and the volume of arrivals have reached tipping points,” he said.

“Our collective response and service efforts have now become overwhelmed: the regional welcome center we helped establish in Montgomery County, Maryland is at capacity,” Rodriguez said. “Our homeless services system is already under great strain; and tragically, many families arrive in Washington, DC with nowhere to go, or they remain in limbo seeking onward destinations across the United States.”

RELATED: Texas denies it misled any asylum seekers it bused north to DC

Rodriguez expressed concern on the mayor’s behalf regarding pledges from both Texas and Arizona to continue the practice indefinitely and called the dire situation and a humanitarian crisis.

He specifically requested that DCNG support in a Joint Reception, Staging, Onward Movement, and Integration (JRSOI) mission in the District, specifically seeking 150 DCNG personnel per day to assist the lead NGO with staffing, utilizing shift schedules to cover a 24/7 operation.

The letter also detailed a request to use DCNG transportation assets to shuttle migrants to suitable federal, temporary processing centers to help move migrants to their final destinations.

“To be clear, I recognize the magnitude of this request,” the letter states. “But the Governors of Texas and Arizona are making a political statement to the federal government, and instead, their actions are having direct impacts on city and regional resources in ways that are unsustainable. The situation we collectively find ourselves in necessitates a whole-of -community response, with DCNG support.”

The mayor also weighed in herself in a letter addressing what she called the “cruel political gamesmanship” of the Texas and Arizona governors.

“Our ability to assist people in need at this scale is very limited,” Bowser wrote. “Instead of rolling up their sleeves and working with the Biden/Harris Administration on a real solution, Governors Abbot and Ducey have decided to use desperate people to score political points.”

Bowser’s request to use the National Guard to lead the humanitarian efforts has been met with criticism from the grassroots groups that have been receiving the asylum seekers like Sanctuary DMV and Mutual Aid Migrant Support. These organizations say that for fifteen weeks, volunteers have supported over 4,700 migrants that were sent in over 150 buses to DC

“Refugees to DC have been traumatized enough already,” Mara Levy said, speaking on behalf of the volunteers. “They need to be met with comfort and warmth, not a military presence.”

The network is still demanding a local response and accountability from Mayor Bowser who has yet to receive a response from the federal government about the use of the National Guard for the arrival of the migrant buses.

WUSA9 is now on Roku and Amazon Fire TVs. Download the apps today for live newscasts and video on demand.

Download the WUSA9 app to get breaking news, weather and important stories at your fingertips.