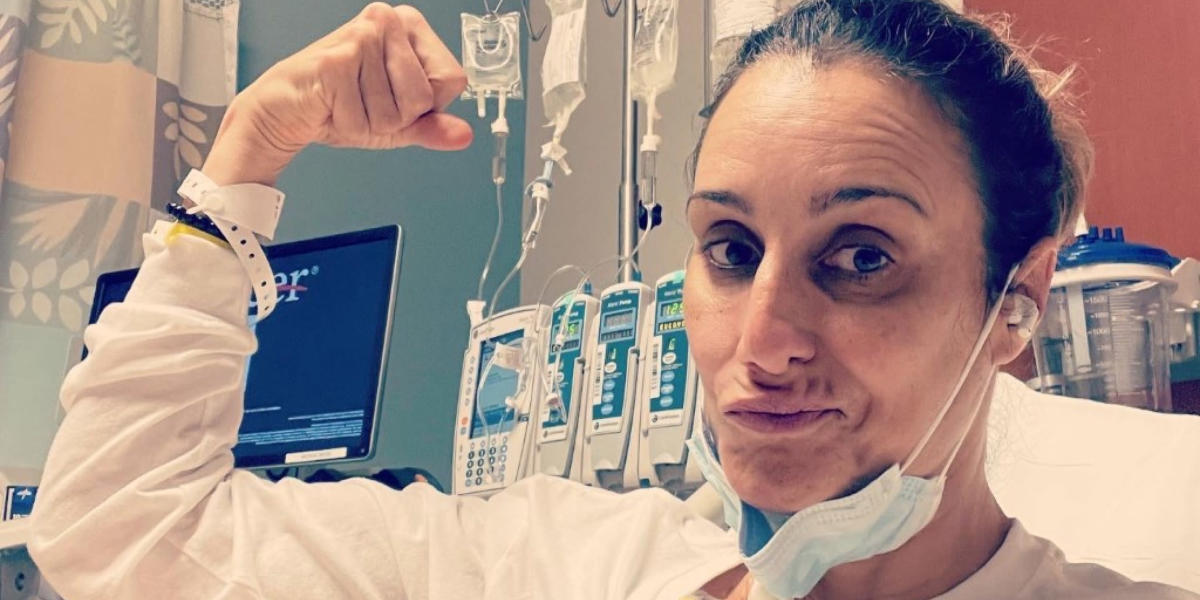 Christine Bronstein describes herself as a “super healthy” person who’s been eating kale since before kale was cool. At 48, she exercises regularly, avoids sugar and doesn’t drink alcohol.

So when she noticed a little blood in her stool last fall, she didn’t necessarily think much of it, blaming the bleeding on hemorrhoids.

Still, Bronstein ordered an at-home colon cancer screening test just to be safe and took it in January. When the results came back positive, she anxiously texted her primary care doctor to find out the next steps. “You don’t have cancer,” he replied, adding a smiley face.

Bronstein insisted on a colonoscopy, which revealed she had an almost 2-inch tumor in her rectum. The diagnosis: stage 3 colorectal cancer. Two polyps that could have turned into cancer were also removed during the procedure, she said.

“I’m very lucky that I did my test when I did my test,” Bronstein, who lives in Kula, Hawaii, and is now undergoing chemotherapy, told TODAY.

“This thing really takes people down right in their prime. … I think the problem why this is becoming the No. 1 killer for younger people is because their symptoms get denied. Doctors just do not know, so they’re not catching it until it’s already metastasized.”

Colorectal cancer is the second most common cause of cancer deaths, with more than 52,000 Americans expected to die of it this year, according to the American Cancer Society. Risk factors include obesity, physical inactivity, smoking, a diet high in red and processed meats, older age and a family history of the disease. The main symptoms include rectal bleeding, abdominal pain and anemia (low red blood cell counts).

The rate of colorectal cancer has been “rising rapidly” among adults under 50, the National Cancer Institute noted. By 2030, it’s expected to become the No. 1 cancer killer for people 20 to 49 years old, according to Fight Colorectal Cancer, a patient advocacy group sponsored by several pharmaceutical companies.

Bronstein, who knows two women younger than her also diagnosed with the disease out of the blue, said she didn’t blame her primary care doctor for that smiley face text dismissing her cancer concerns. She believed he meant well and probably didn’t know this cancer is rising so fast in younger adults.

Her husband, journalist Phil Bronstein, has been more vigilant about the disease because of his family history, not realizing his younger spouse would ultimately be the patient.

“It was on my radar potentially for me. My dad had colon cancer,” Bronstein, 71, told TODAY. “Ella She was the healthy one,” he said about his wife de ella, recalling feeling “denial, shock, horror, fear, concern” after her diagnosis of ella.

Christine Bronstein chose MD Anderson in Houston, for her treatment, noting she was grateful to have good health insurance that allowed her that option. The plan is to shrink the tumor with chemotherapy and then have it surgically removed in June if everything works out well.

Bronstein is focusing her energy on recovering and raising awareness of colorectal cancer, recently writing on Instagram that “butts and guts are the new boobs when it comes to cancer awareness.”

“Breast cancer (groups) did such an amazing job of raising awareness in such a powerful way that we need to just take a page of that playbook,” she said.

Bronstein wishes she had done a colon cancer screening at 45, the age when the US Preventive Services Task Force recommends starting testing.

A colonoscopy has been the gold standard to check for polyps or cancer, but it requires bowel preparation, sedation and time off work.

Stool-based tests, which are more convenient, are now among the recommended screening options, but they usually need to be performed more often. There are several types — some look for hidden blood, others also check for DNA or gene changes — and some require a doctor’s prescription. Patients provide a stool sample that’s sent to a laboratory for analysis.

An annual at-home fecal immunochemical test (FIT) may be as effective as a colonoscopy for people who don’t have risk factors for the disease, catching at least 75% of cancers, a 2019 study found. The test is designed to find tiny amounts of blood in the stool, which can be a sign of colon cancer or large polyps, according to the American Cancer Society.

That’s the type Bronstein ordered from a company called LetsGetChecked. No prescription was required, she said.

If an at-home stool test returns a positive result, a colonoscopy still needs to be done to confirm the result.

As Bronstein continues her treatment, she hopes the official guidelines will be adjusted to encourage people to start screening for colorectal cancer at an even younger age.

“Once you have it, it deeply affects your life so I’m really about early prevention earlier than 45,” she said. “If you have symptoms, run to your doctor.”