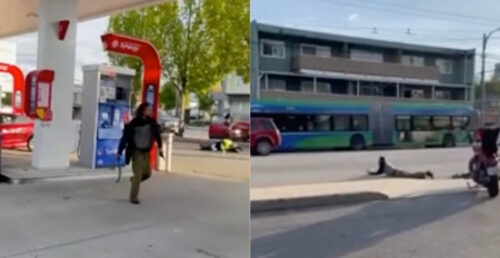 Warning: A video featured in this article contains graphic violence.

Vancouver Police are sharing some details around an apparent dual blade attack at a gas station.

In a statement to Daily Hive, VPD stated that they’re investigating a stabbing that occurred at the Esso gas station at Hastings and Skeena streets this morning. One man was taken to the hospital for non-life threatening injuries. The man wielding the dual blades has been arrested and is in custody.

A reddit user shared footage of the incident before the post was subsequently removed, but a friend of the user who submitted the video shared some of the details with Daily Hive.

While it looks like several people were injured in the video crawling around, VPD believes only one person was.

Shared by a user on reddit, what the hell is going on?#Vancouver pic.twitter.com/EbyEN8Ywjv

According to the person who took the video, the situation seemed to involve some sort of motor vehicle incident.

“A guy in a van drove into one of the dudes you see on the floor, hitting him [with the van].”

He went on to say that someone got out of the van with two blades and apparently hit someone in the head who can be seen injured in the video, before allegedly stabbing the one with the broken ankle.

In the video you can see a man holding two bladed weapons, aggressively following some of the customers.

Vancouver Police will be sharing more info at a later time.