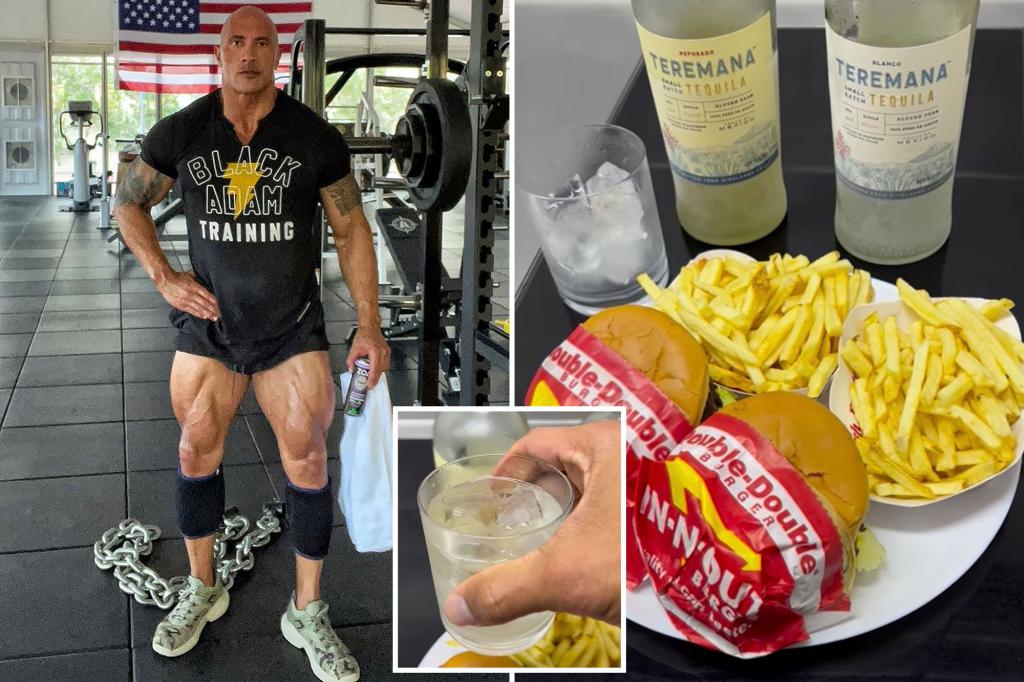 Dwayne “The Rock” Johnson is celebrating both a cheat day after an intense workout as well as his first time trying In & Out.

The 50-year-old actor paired his two Double Double burgers and two does of large fries with some tequila.

The former wrestler shared a video to his 332 million fans on Instagram earlier this week showing off his fast food meal.

“A #cheatmealsunday for the history books,” he wrote. “My first time ever eating @innout 🍔.”

The “Black Adam” star continued: “A solid start with a bite of good fries 🍟 as we know sh–ty fries can ruin the whole experience.”

“[I paired] the main course with a (quite delicious) combo pour of @Teremana Blanco & @Teremana Reposado; as founder, I make up the tequila rules 😁🥃.”

Johnson then jokingly gave a thumbs up on the verdict of his taste test.

“This cheeseburger connoisseur will now add In & Out to ‘the list’ 🍔📝,” he added. “Enjoy your cheat meals, my friends.”

Johnson recently explained why he decided to turn down hosting the Emmys on Sept. 12.

Show producers approached him for the gig, however, he ultimately declined, Entertainment Tonight reported last month.

“It was just scheduled. I was really, truly honored when they came to me and asked, but it was just a scheduling thing,” the father of three told the publication at the time. “That’s all. That’s really what it comes down to.”

Chris Rock was also approached about hosting the show with the “Hobbes and Shaw” star.

Johnson will next be seen in the DC superhero flick, “Black Adam” — out October 21.

The story follows Johnson as the titular hero who is given the powers of the ancient Egyptian gods and is unleashed upon Earth to bring justice to its inhabitants.