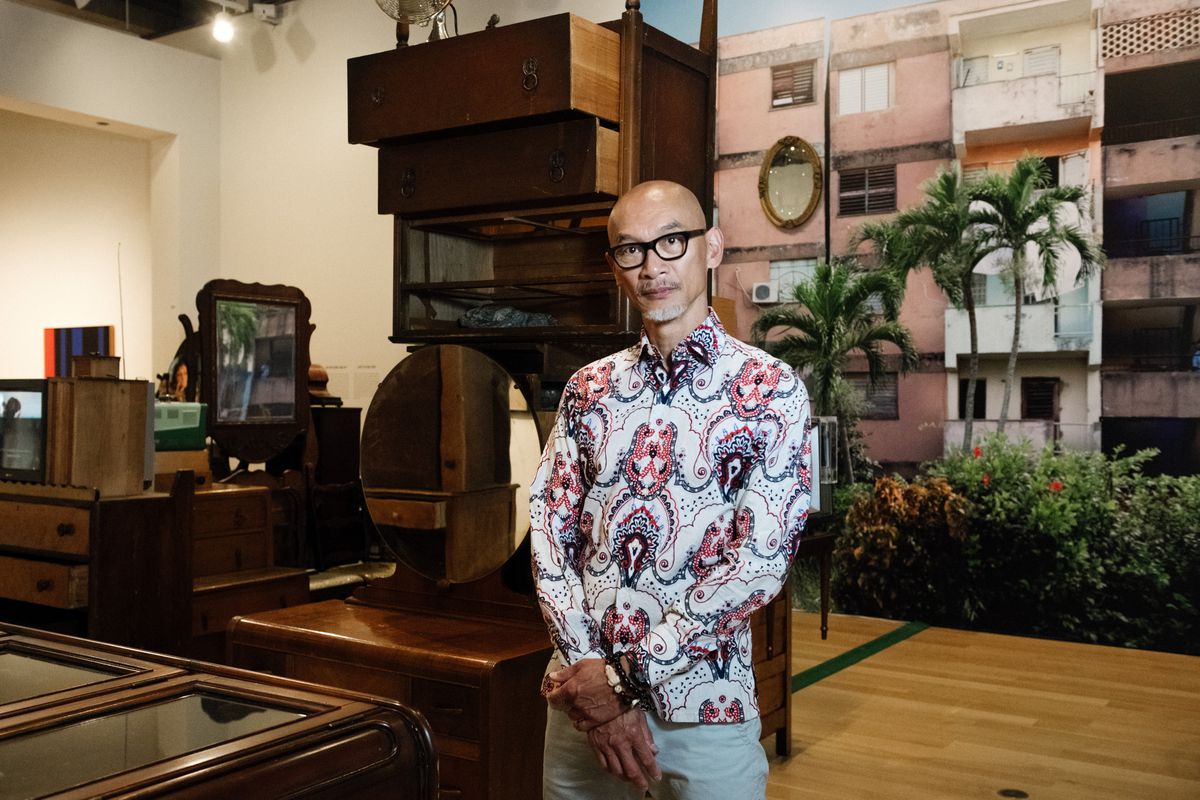 Toronto artist Ed Pien has been working on his Spanish. And his embroidery of him. And some dance steps.

He is acquiring these new skills as part of a cultural exchange with a group of Cuban seniors who he has been interviewing and photographing since 2014. The elders answer his questions about how they have experienced time, and Pien finds ways to participate in their lives and hobbies

“Ana [Lescague] is 104 years old, she loves to dance. So I’m going to learn one of the dances that she mentioned in her interview,” he said. And Mercedes [Conde] likes to embroider. The last time I saw her, she showed me an entire workbook that she had come up with to sell her de ella embroidery… to her neighbours. And so I’m going to learn some embroidery from the photographs I had taken of her book from her.

The thing is: Lescague and Conde are both dead now. This poignant project is limited by the march of time – six of the original 13 participants are gone – yet it is ongoing. Pien considers that his current show by him at the Art Gallery of Ontario in Toronto, where he has installed videos of their conversations in old TV sets mounted in a pile of second-hand furniture, is merely an interim report.

Although Pien is learning Spanish, he is not fluent and has conducted his video interviews through a translator on repeated visits to Cuba or, when COVID has prevented that, remotely using a translation app, as part of an unusual cross-cultural project with a twisting backstory.

He was introduced to the seniors by Catherine Sicot, the cultural producer and art curator who leads a Toronto company called Elegoa that works to seed creativity in peripheral communities in Canada, France and Cuba. I think he has a long career making drawings and multi-media installations that often refer to memory, loss and ghosts. For a project with a local artistic network in the Havana suburb of St. Augustin, Sicot suggested that he consider the iconography of Santeria, the Cuban practice that mixes West African traditions with Catholic ones, but Pien rejected that, sensing he didn’t want to trespass on someone else’s religion.

“I didn’t know anything about Cuba, I don’t speak the language. … I didn’t want to be a tourist artist.”

Coincidentally, shortly after Sicot approached him, Pien had another idea. He was visiting a former boyfriend, an older man who he had dated decades before, when he was 24 and his partner 50. In 2014, Pien was now 56 and the other man was 82. His friend produced a picture of himself back when he was young, almost the same age Pien had been when they met. The layers of ages were overwhelming.

“I started to cry. … This play with time was so beautiful,” Pien recalled. He went back to Sicot with a request. “I said, ‘If possible, if you can find a group of elders and they would explore the idea of ​​time with me over time, that would be amazing.’”

The group assembled all live in St. Augustin, many in the same building constructed by work brigades after the revolution, and were young when Fidel Castro took power in Cuba. Some remain dedicated revolutionaries – “Fidel is in me,” they said after Castro’s death – while a few others are ambivalent. Pien did not ask about politics but about the past, present and future; although social and political questions naturally rose.

Marcellin [Vives], for instance, he’s Black and I really want to do more research on racism in Cuba. … It exists. … Marcelino embraced the revolution because he felt he was mistreated. Most people say they were treated worse than a dog prior to the revolution. Poverty was rampant and there was a lot of exploitation. … Despite the fact that they’re short on everything, they’ll say, ‘Well, we have free education, we have some food and we have free health care.’”

Mainly, the elders offer poignant reflections on the passage of time and the inevitability of death. “Time is ruthless,” Walfrido Gonzalez says. “Ruthless because it goes by, goes by, goes by and when you come to realize it: ‘Hey, I’m a senior.’”

To turn such insights into an artistic installation, Pien wanted to make a visual statement on the losses felt by his subjects. It was the childless Zonia Peguero who gave him the idea: “She told her niece that when she dies de ella all her belongings de ella including furniture that came from her parents de ella will be given to her. And the niece said ‘These things mean nothing to me. When you die, I’m just going to sell them and take the money.’”

So Pien assembled old TV sets, bureaus, tables and chairs and piled them up in the middle of the gallery like so many abandoned things. Like the aged, the furniture seems to have lost touch with its initial purpose.

The videos sometimes echo that physical display with scenes of empty rooms: Realizing that there would be deaths along the way, Pien began asking the participants to step outside for a bit so his crew could also film their apartments without them, creating images that could eventually stand as video memorials.

But another issue arose that Pien had not considered: What would happen if a participant could not longer properly consent. Gonzalez, for example, has suffered strokes and often hallucinates, to the point he is sometimes living in a separate reality. Pien senses this is rich material but he trusts the old man can tell his interviewer when it’s time to stop.

The participants’ change their stories over time – Gladys Rodriguez was clearly misrepresenting her age in interviews, perhaps an indication that she was living in the past – while Evangelina Rivas initially said she was unafraid of death but later confessed to her fear of being buried and having insects eat away at her body.

Peguero, meanwhile, hints at deep regrets over a limited life when asked what she would tell her 25-year-old self.

But for Peguero, like all the rest of us, there is no stepping in the same river twice.

Ed Pien’s Present: Past/Future continue at the Art Gallery of Ontario until spring, 2023.

sign up for The Globe’s arts and lifestyle newsletters for more news, columns and advice in your inbox.