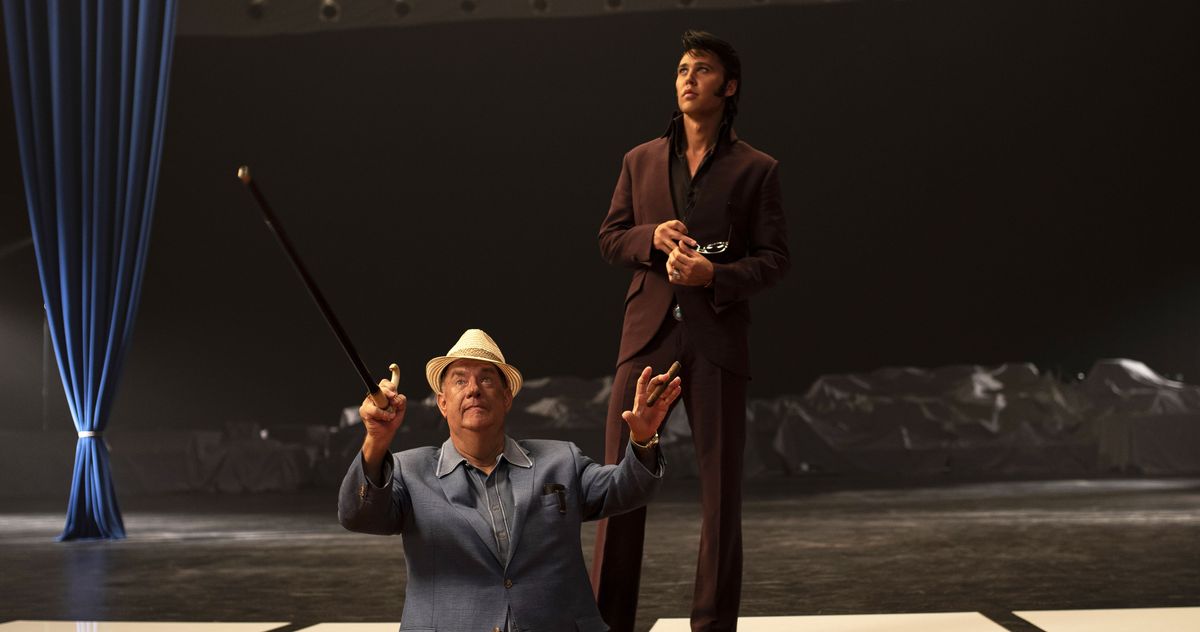 Roxana Hadadi is a TV critic who also writes about film and pop culture, with the closed captions on and motion smoothing off.

Who was Elvis Presley? Baz Luhrmann’s biopic Elvis — now streaming on HBO Max — cycles its version of the American icon through an array of uniformly admirable roles as it crafts its identity. He was a devoted son to his parents of him, he was a genuine appreciator of Black musical styles and a civil-rights ally, he was a loyal husband and a loving father, he was a musical innovator and an impossible-to-replace performer . For 159 minutes, Elvis indulges in hagiography and pinpoints the singer’s only mistake as trusting the wrong man. Here, Colonel Tom Parker (Tom Hanks) is the sole culprit behind Elvis’s financial instability, drug addiction, fracturing family, and increasing irrelevance in the 1970s, and the film’s boundaries around Parker as a villain and Elvis as a hero are rigid and unmovable.

But they’re familiar, too, because Elvis is pulling off a gender reversal of a common music-movie trope: A pop star’s sexuality is commodified by industry higher-ups, and they must fight to avoid becoming just another product. Varyingly fictionalized biopics from Glitter to The Runaways have positioned this as a particularly female problem, locking women into a restricted identity and spiraling them into despair. Luhrmann himself dove into the overlaps between sexualization and performance with Moulin Rouge!: “All my life you made me believe I was only worth what someone would pay for me,” Nicole Kidman’s singer and courtesan Satine says to her scheming father figure, Harold Zidler (Jim Broadbent). but in Elvis, Luhrmann expands that perspective with a powerful scene in the film’s final third that crystallizes the parasitic bond between Parker and Presley. viewed together, Moulin Rouge! and Elvis make a complementary pair; they argue that the greatest danger to an artist and their art by him is the loss of bodily autonomy and the sacrifice of self.

Our first glimpses of Elvis are through Parker’s eyes, and early on, the manager establishes himself as a creeper — practically a voyeur. He spies on Elvis’s before-show prayers with his family and his band. He tiptoes behind Elvis at a carnival, taking in his form from him as the singer, clad in a black lace blouse, leans ever so rakishly against a tent. “He was a taste of forbidden fruit. Ella she could have eaten him alive, ”Parker says of a female audience member losing her mind to Elvis’s onstage hip thrusting. But there’s not so much a sexual edge to Parker’s own consideration of Elvis as there is a capitalist one. Here is a person he can turn into an attraction (“He was my destiny,” Parker says), and those drawn to that attraction will do anything — pay anything — Parker wants. And once Parker convinces Elvis he’s the only professional representation and surrogate parent Elvis will ever need, he becomes a dictator with his top priority of him always being how to manipulate Elvis’s image of him for his own cash in hand.

Endless amounts of cheesy merch, Elvis’s US Army stint, the dozens of films in which he starred, co-starred, or cameoed — Parker engineers it all, and it’s a thrill when Elvis finally allows the singer to strike back by advocating for his own music and his own preferences. The film devoted a significant amount of time to Elvis’s 1968 Christmas special. Butler adds an edge of sly cunning and a raw vulnerability as Presley refuses Parker’s demands to don a bright-red cardigan to sing “Here Comes Santa Claus,” instead performing the Martin Luther King Jr.–inspired “If I Can Dream” in a creamy-white suit. (A pop star rebelling against their management and wearing what they want to wear? A foundational element of this biopic subgenre!) Butler also does well when Elvis shifts to Las Vegas and the International Hotel, where Parker convinces Presley to put down roots instead of going on a far more lucrative international tour. After Presley rattles off a list of the other singers and musicians he wants onstage with him, Luhrmann places us alongside Butler as he maneuvers among them during rehearsal. At Presley’s urging, the orchestra gets louder and louder — the booming horns, funky bass, and cooing backup vocals are all bombastic and immersive — and Butler’s ease as he deliberately moves around onstage, isolating each group of performers and praising their skills, effectively counters Parker’s earlier sneakiness. As Presley punches his fist in the air at their tempo, it’s a rare moment in Elvis when he’s actually in control—and Luhrmann is swift in undercutting it with a reminder that this triumph will not last.

The scene that follows in Elvis plays like a remix of another late-film confrontation Luhrmann staged: “El Tango de Roxanne,” from Moulin Rouge!, in which Kidman’s Satine is basically sold to the tempestuous Duke (Richard Roxburgh) for a night, and her lover, Christian (Ewan McGregor), stews in a mixture of anger and grief, knowing what she is being forced to do. That scene cuts back and forth between Satine and the Duke in a bedroom, Christian singing “Come What May,” and other Moulin Rouge performers singing and dancing a tango version of the Police’s “Roxanne” with a hard, sexualized edge. Elvis, meanwhile, stays in one location, the theater of the International Hotel, and one song soundtracks the sequence: Presley’s “That’s All Right.” Luhrmann divides his attention between Presley, who is unleashing that gigantic voice and strutting around; his wife, Priscilla (Olivia DeJonge), proudly watching him from the audience; and Parker, seated with the owners of the International and signing Presley, without his knowledge of him, to a five-year exclusivity contract with the hotel as a means of covering the Colonel’s gambling debts. This climactic moment has fewer moving parts than the one in Moulin Rouge!, but Luhrmann creates a similarly claustrophobic atmosphere. Both scenes emphasize the singers’ loneliness despite their fans’ zealous adoration. Much as Satine was forced into that bedroom by Zidler, Elvis is forced into this binding contract by Parker — and each suffers the corrosive impact of their manager turned father figure’s coercion.

In Moulin Rouge!, we understood that Satine was losing a part of herself in doing what Howard and the Duke wanted. (Though the Duke’s rape attempt is stopped, it still weakens Satine.) Elvis, too, equates forced sexualization with the greatest betrayal of an artist. After Presley puts on that fantastic first show at the International — one in which both he and the performers he assembled are doing the absolute most and best — it’s not Priscilla who comes out to stand by his side. It’s Parker, emerging to maneuver Presley through a crowd of adoring female fans, each of whom Elvis will kiss on the mouth in full view of Priscilla’s shattered then resigned gaze at her. The blocking of this scene, with Hanks’s Parker standing directly behind Butler’s Presley and steering him from one mechanical embrace to another, makes the power imbalance of their relationship quite clear. While Hanks gives Parker a giddy skip to his step, Butler is nearly stone-faced, leaning into kiss after kiss with little reactivity. “You do whatever you want, Colonel, as long as that boy stays on that stage,” one of the International higher-ups had told Parker minutes before. And indeed, Parker pockets half of Presley’s earnings from Las Vegas while turning the city into a sort of tomb for Presley. The singer’s eventual image of him as a chubby, jumpsuit-wearing schlub dependent on various pharmaceuticals to hold a tune is a caricature his manager inadvertently helped create.

Elvis doesn’t go all the way into that period of Presley’s life; it’s too in love with its subject to consider the man’s mistakes and missteps or make space for the individual agency that caused them. The film’s ending is not as on the nose as the final moments of Moulin Rouge!, during which Satine dies in Christian’s arms after delicately coughing up blood. But these films are tied together by their industry-made tragedies: Satine and Elvis are placed on the conveyor belt of fame, celebrated, then betrayed; their bodies are coveted, criticized, and ultimately consumed by the fans who believe their reverence equals a kind of ownership. the point Elvis makes about how our obsession with celebrity feeds into a cycle of exaltation and disaster — regardless of the star’s gender — closes the loop on a conversation Luhrmann started more than 20 years ago with Moulin Rouge! And in case Luhrmann’s indictment of abusive parental figures leeching off a younger singer’s talent wasn’t clear enough, he shows us the International Hotel’s marquee bearing the name of the group that replaced Presley in 1973 — the Jackson 5 — and uses snippets of Britney Spears’s “Toxic” and the Backstreet Boys’ “Everybody (Backstreet’s Back)” throughout the film.

The Jacksons, Britney, BSB, Presley — Luhrmann wants to reclaim them all. And the kiss-off Elvis is never able to give Parker is just as important to this redemptive effort as the kisses he’s forced to provide.

Sign up to get New York‘s week in reviews.