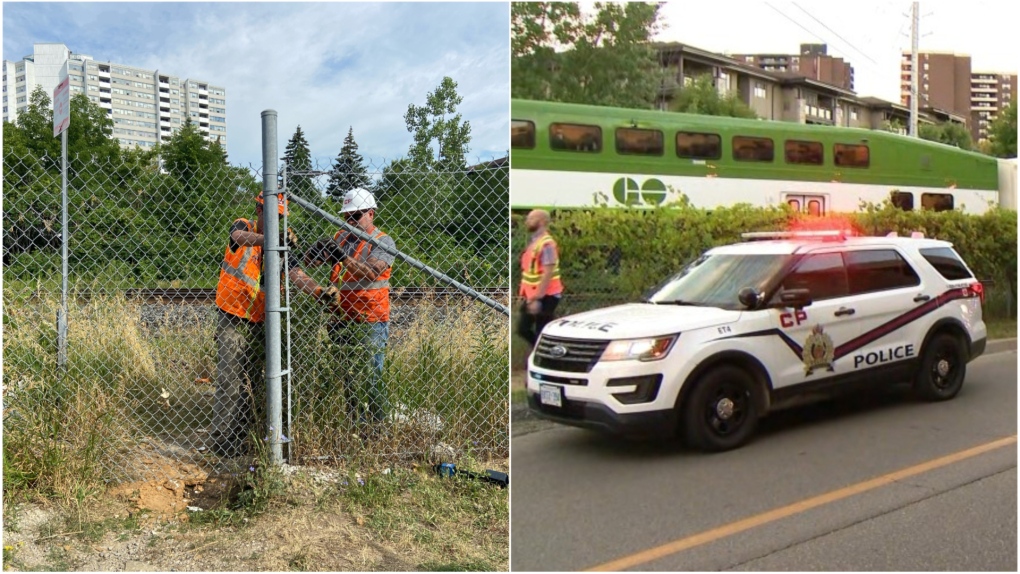 Crews were seen installing fencing near a set of train tracks in Mississauga, Ont. a little over 12 hours after a young child was struck and killed by a GO Train in the area.

Emergency responders were called to the scene at Dundas Street and Cawthra Road at approximately 7:40 pm Tuesday.

Mississauga Fire first confirmed a child had been struck by a passing train. The child, who is believed to be four years old, was pronounced dead at the scene just before 9 pm

The Transportation Safety Board of Canada (TSB) has confirmed they have since launched an investigation into the crash.

A spokesperson for Metrolinx, which operates GO Train service, said in a statement that some 300 passengers were on board the train when the child was struck.

“Metrolinx is assisting with the investigation into this incident. That includes questions surrounding the protections around rail lines. There are many aspects to rail safety, and investigators will look at all the factors. Safety is always our top priority,” James Wattie said in an email to CTV News Toronto Wednesday afternoon.

READ MORE: Child dead after being hit by GO Train in Mississauga, Ont.

Speaking to CP24 at the scene, a witness who owns a nearby garage said he was working at the time of the incident when he heard the blaring of train horns, followed by the loud screech of a railway brake.

“When I came out of my garage, I saw the train stopped. This has never happened before,” Muhammad Tayyab said.

“Three kids were screaming and crying very loudly. I got shocked. I ran there… I saw the body, there was one kid on the side…They were wounded very badly.”

Tayyab said he saw a woman running towards the children shortly afterwards and described her as being in complete shock.

It’s unclear how the child came to be in the path of the train at the time of the collision or where exactly they gained access to the tracks.

However, residents in the area who spoke to CP24 in the aftermath said the lack of barriers to the train tracks is a known issue and that it’s not uncommon to see people crossing the tracks to get to the other side.

To that end, crews were seen erecting fencing Wednesday morning in an area near the tracks that appeared to be unobstructed.

Crews install fencing near a section of train tracks in Mississauga, Ont. on July 27, 2022.

Previously, the only barrier restricting access to the tracks at that location was a “no trespassing” sign.

An unobstructed area near a set of train tracks in Mississauga, Ont. is seen on July 27, 2022.

The investigation into the crash is ongoing and this morning Ontario’s transportation minister, Caroline Mulroney, offered her condolences to the victim’s family.

“I have spoken with Metrolinx’s CEO, who has informed me that his team is assisting with the investigation underway,” Mulroney said in a tweet.

Deeply saddened following news of an incident with a GO train that resulted in the death of a child. My sincere condolences are with the family of the victim.

I have spoken with Metrolinx’s CEO, who has informed me that his team is assisting with the investigation underway.

While police have not released the age of the child involved in the crash, Mississauga Mayor Bonnie Crombie said in a tweet published Tuesday night that she was “absolutely devastated” to hear of the “death of a young four-year-old.”

“The loss of a child is nothing short of a tragedy and my heart goes out to their family and loved ones as they grieve this indescribable and immeasurable loss,” Crombie wrote.

Pamela Fuselli is the CEO of Parachute, a Canadian organization committed to injury prevention, and says there’s over 73,000 kilometers of railway tracks across Canada but that not all of it is closed off to the public.

“Not every space can be separated by fencing or barriers, unfortunately,” Fuselli said.

“In places where there is a high population, where there’s a high volume of potential crossing or people wanting to get from one side to the other, that needs to be taken into account.”

She said that understanding the movement of people is key to preventing these tragedies and that “passive” precautionary measures, like fences and barriers, can help inform the public of where to cross safely.

With files from Joshua Freeman