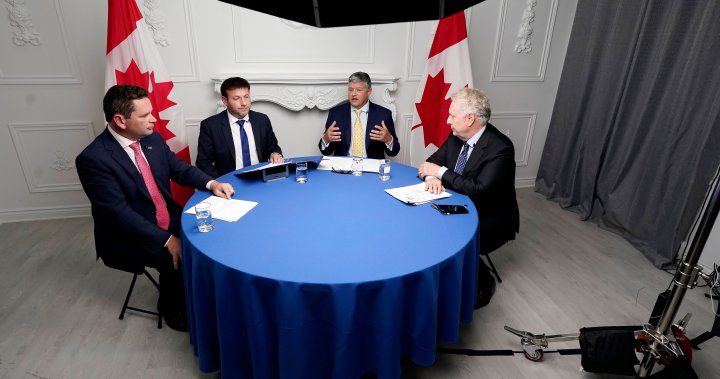 Jean Charest spent the last official debate of the federal Conservative leadership race on Wednesday stressing that his experience as a political leader is what the party needs to unite.

But with six weeks left in the contest, the former Quebec premier, who once led the erstwhile federal Progressive Conservative party, would not say whether he plans to remain within the Conservative Party of Canada if another candidate is revealed as the winner on Sept. 10.

Conservative MP Scott Aitchison, the former mayor of Huntsville, Ont., who was first elected to the House of Commons in 2019, said he would keep his seat no matter the outcome.

“Can you honestly say that if you do not win this race, that you will be here on Sept. 11 helping Leslyn (Lewis), Pierre (Poilievre) and me join our party?” Aitchison asked Charest in the debate.

While delivering his final pitch to members, Charest said he has been a lifelong Tory.

“To answer Scott’s question, I have all my life been a conservative. I believe in conservative values,” Charest, who led the Quebec Liberals, the main federalist party in the province, for 14 years. “I led a coalition government in Quebec because, as a conservative, I believed in the unity of this country.”

Pressed again after the debate was over, Charest told reporters he is focused on winning.

Charest, who is working to persuade party members to pick him as their first choice on the ranked ballot, is counting in particular on votes from those in his home province of Quebec, as well as Ontario and Atlantic Canada.

Charest pointed out during the debate that a majority of the more than 670,000 members who signed up to vote have not yet done so, suggesting they are still making up their minds.

The Conservative party reported Wednesday that about 150,000 ballots have been returned so far ahead of the Sept. 6 deadline to vote. It estimates about 400,000 people are new to the party.

Throughout the evening Charest repeatedly pointed out how he showed up to the event, unlike Poilievre, the Ottawa-area MP considered Charest’s main rival, and with Lewis, a rookie MP who placed third in the party’s 2020 leadership contest.

“If we are going to join the party, you have to show up,” Charest said.

Brown lashes out at Conservatives, Poilievre after disqualification: ‘Not a fair election’

He also said a candidate not showing up for leadership debate “is like a fish who says he doesn’t want to swim in the ocean.”

In Regina, Poilievre told a campaign rally on Wednesday that he was happy to be with the crowd.

“I could have been cooped up in a little hotel room around a small table listening to a defeated Liberal premier drone on,” Poilievre said in a video of the event streamed live on YouTube.

The party organized the debate over the past two weeks and opted for a low-profile setup, held at a small Ottawa studio without an in-person audience.

The three participating candidates — Aitchison, Charest and Roman Baber, a former member of the Ontario legislature — were packed into a small photography studio and seated around a table, rather than standing at podiums.

Before the debate began, Charest, who had pushed the party to hold a third official debate, described the setup as “bizarre,” adding: “I’ve never seen anything like this.”

Poilievre and Lewis risk being fined $50,000 for skipping the event. Although party rules say the penalty for any candidate who decides to skip an official debate is automatic, the party’s leadership election organizing committee will have the final say.

The three candidates began by reflecting on what they had heard from Canadians and party members during the contest, which began after the Conservative caucus voted to oust former leader Erin O’Toole from the top job in February.

Charest pitched himself as the only candidate who could change the Conservative party’s record of losing consecutive federal elections — in 2015, 2019 and 2021 — to the Liberals led by Prime Minister Justin Trudeau, after having spent nine years in power under Stephen Harper.

“You have had enough of losing,” said Charest.

Baber, who was booted from Ontario Premier Doug Ford’s caucus for opposing lockdowns, said he would continue to stand up for Canadians affected by COVID-19 vaccine mandates.

He also stressed that he is not afraid to stand up for his values, including against the Liberal’s climate agenda.

At one point, he said to deal with climate change he would look to increase the amount of trees planted annually in the country.

1:09
Baber says he would increase number of trees planted in Canada to ‘half a billion a year’

7:06
Conservative debate: The issues and candidates to watch

Conservative debate: The issues and candidates to watch – May 15, 2022

Aitchison, who throughout the race has struck an optimistic tone, said he believes Canada can keep its commitment to reach net-zero emissions while canceling the national carbon price, which is a favorite rallying cry among party faithful.

Charest pledged to get rid of the federal price on consumer goods while imposing a levy on the heaviest of emitters.

He said the party must present a credible climate plan if it hopes to win the chance at government and highlighted his experience developing climate plans as Quebec’s premier.

“A slogan is not a climate plan,” said Charest, who was federal environment minister under Progressive Conservative prime minister Brian Mulroney.

The debate, which included 45 minutes in English followed by an equal amount of time in French, featured more friendly discussion than sparring between candidates.

Party president Rob Batherson, who moderated the debate, told candidates and viewers “we don’t have any sad trombones in this debate.”

He was referring to sound effects used during the official English-language debate in May, which many party members, including Poilievre, heavily criticized.

Highlights from the Federal Conservative Leadership debate – May 12, 2022