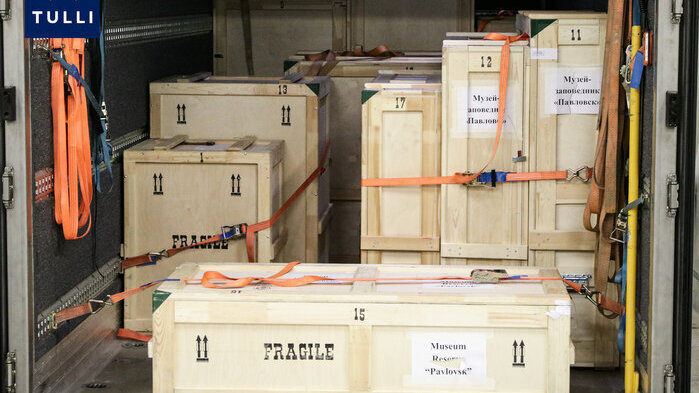 A shipment of valuable art was seized at Finland’s border with Russia, with customs officials citing sanctions stemming from the war in Ukraine.

A shipment of valuable art was seized at Finland’s border with Russia, with customs officials citing sanctions stemming from the war in Ukraine.

Finland says customs officials have seized millions of dollars’ worth of artwork, in shipments that were headed to Russia in violation of European sanctions.

Finnish customs agency Tulli said on Wednesday that its agents detained three shipments of paintings and sculptures over the weekend at Vaalimaa, a border crossing between Finland and Russia.

The works were being transported from museums in Italy and Japan, where they were on loan from Russia, officials said. Customs enforcement director Hannu Sinkkonen said at a press conference that the works have been valued at the equivalent of more than $46 million for insurance purposes, though some of them are “priceless.”

“Professionals have been consulted in the moving and storage of the goods,” Sinkkonen said. “We are not going to open the packages.”

The Finnish customs agency says the works will stay in a warehouse for the time being, and are being stored based on considerations of their value, characteristics and safety. Images on its website show wooden boxes of various heights and sizes, marked “fragile” and bearing labels in Cyrillic.

The customs agency is also conducting an investigation along with Finland’s foreign ministry — which it says will explore the matter with the European Commission. The investigation will involve information gathering, international cooperation and requests for mutual assistance, officials said.

The European Union sanctions unveiled against Russia after its invasion of Ukraine include a ban on the sale and transfer of artwork. Sami Rakshit, director of Finnish Customs’ Enforcement Department, said that pieces of art are considered luxury items, Reuters reports.

“The enforcement of sanctions is part of our normal operations and we always direct our controls based on risks,” Rakshit said in a statement. “The shipments that have now come under criminal investigation were detected as part of our customary enforcement work.”

Officials told reporters that 10 people are suspected of breaching sanctions by transporting the art.

Citing Russian news agency Moskva, Reuters reports that the works of art had been loaned to Italy from leading Russian galleries including The Hermitage Museum in St. Petersburg and the State Tretyakov Gallery in Moscow, and that those loaned to Japan had come from Moscow’s Pushkin State Museum of Fine Arts.

News of the seizure comes just over two weeks after Finnish customs officials detained 21 yachts believed to be owned by Russian oligarchs and others under EU sanctions.

This story originally appeared in the Morning Edition live blog.