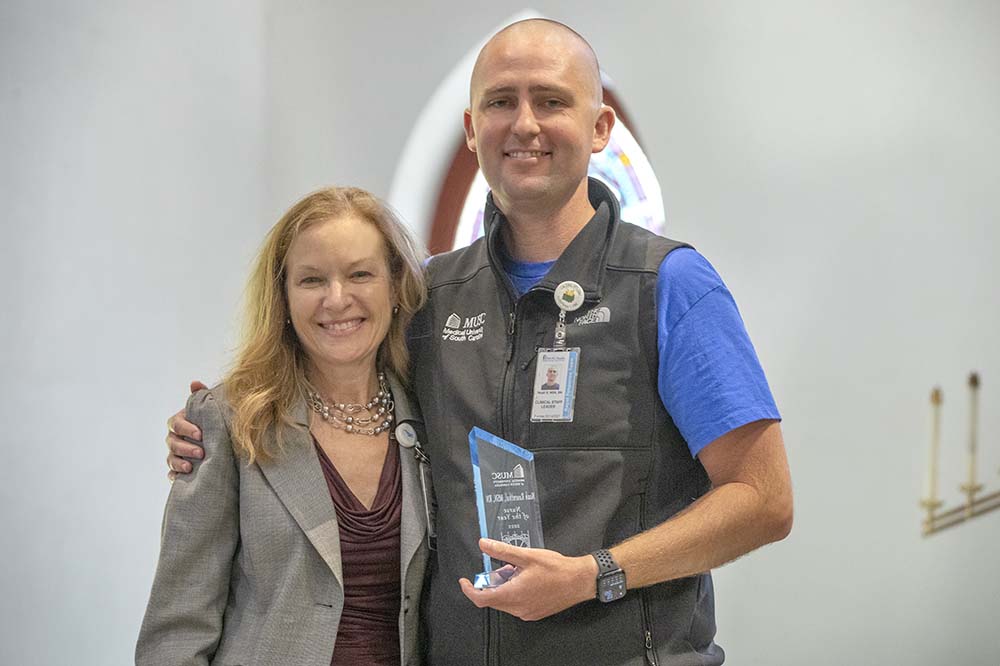 Noah Rosenthal is not one to brag. “Just your average guy,” is how he described himself. But others clearly see this firefighter-turned-nurse a little differently. He’s the Medical University of South Carolina’s Nurse of the Year.

Chief nursing officer Patti Hart, who holds a doctor of nursing practice degree, said that at a time when some nurses are burning out, Rosenthal is leaning in. At the Nursing Excellence Awards Ceremony recognizing him and other high-performing nurses, Hart read from the letter nominating Rosenthal. “Noah is always thinking outside the box. He’s innovative, and we need that to solve health care problems.”

But this creative caregiver didn’t set out to become a nurse. “It was a second career for me. I was a fireman at first, and so I really homed in on the medical aspect of the fire service,” Rosenthal said.

That brought him to MUSC Health in 2015 as an emergency medical technician. “Then I completed nursing school and started on the medical surgical intensive care unit as a new grad in January 2019. I really appreciated the opportunity that nurses get at the bedside to collaborate for and with the patients and their families to give them the different options and advocate for them.”

His new career took off. “I currently serve as the clinical staff leader for the rapid response team, where I have the opportunity to still remain at the bedside and serve a role in the ICU and then serve a role throughout the organization by means of a rapid response nurse.”

Rosenthal described what that involves. “The main foundation of rapid response throughout the organization, since its start, has been to prevent emergencies from happening. And so a large amount of our work is utilization of a modified early warning score that EPIC creates.”

EPIC is the medical records system MUSC Health uses. “Once that list is populated, we’ll meet with med surgery and telemetry nurses proactively about patients who have a high risk of deteriorating, requiring unplanned ICU admission. And so we really collaborate with the primary teams to ensure that patients are getting safe care.”

So that’s impressive on its own – working to predict problems and prevent them. But according to the nominating letter, Rosenthal does a lot more than that. “Noah is a genuine and uplifting person,” who is “leading the charge for nursing recognition” and “connecting the nursing profession to its purpose,” Hart said.

For example, Rosenthal has served as a leader in promoting a healthy work environment. “He’s helping to lead work on decreasing workplace violence in the organization and the development and implementation of our behavioral emergency response team. As a front-line leader and a co-leader of the healthy work environment team, his insight from him is invaluable, ”Hart said.

Rosenthal said he enjoys giving that insight. “I would consider myself a helper. I find it fulfilling to help people, and it makes my day better when I get to help people.”

He wanted the public to know something about his fellow nurses these days. “I think it’s very evident that nurses are resilient, very selfless people as a group. We’re really here for the greater good of people, and we really do care and about the care we provide.”

Rosenthal wants them to be recognized for that care. He successfully pushed to increase the number of nurses and nursing teams honored with DAISY Awards for their compassion and skill at MUSC Health.

Rosenthal was among more than 60 nurses honored at the 2022 Nursing Excellence Awards Ceremony. The others were recognized as unit nurses of the year. His honor de ella recognized the impact he has had on the whole organization. Rosenthal said he was humbled by the award and happy to be part of the teamwork that gets the best possible outcomes for patients.

“I’m used to working with the team, and I feel like nursing is just that we kind of collaborate a lot of different disciplines here at MUSC. And we’re just part of the team to ultimately impact patients and their families.”