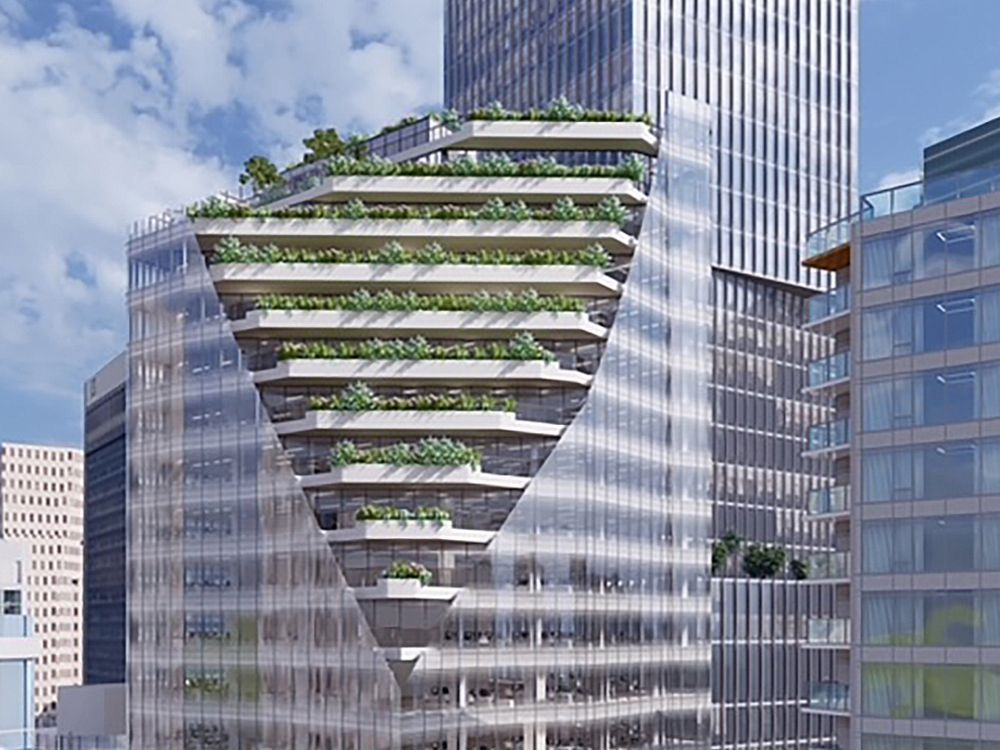 The top floors of a 32-storey office tower that is about to begin construction in downtown Vancouver will each have large, private outdoor spaces in the form of cascading green terraces down the front of the building.

Developers hope this feature will help tenants make it more appealing for their employees to work in-office rather than at home.

The project comes as companies are still guessing at the future of work arrangements, but see that creating a balance is key to keeping talented staff.

“It’s become increasingly important to companies that they attract employees back to the office, especially valued employees, who (may) have opportunities elsewhere and can, to a degree, dictate terms of work,” says Jon Stovell, president and CEO of Reliance Properties in Vancouver, which is working with Houston-based Hines real estate firm on the tower that will stand at 1166 West Pender.

Each floor in the building will also have its own air circulation and filtration system that can be sealed off and controlled separately from the rest of the building.

There are other large tower projects in the downtown core that have been underway during the pandemic that were mostly pre-leased.

But this is the first to begin construction and the leasing process since the pandemic threw work arrangements into disarray.

It is scheduled to be completed in late 2025 or early 2026, and comes as there has been much discussion about the future of working in offices.

Even though routine work can be done from home, there is still a need to be in offices for more collaborative tasks such as strategy development and team building.

“We realize that with some of our staff, probably two-thirds are working hybrid, and more at home than at the office. If we force them to go to the office, they would be pretty disappointed. Reading all the research and articles, we would probably risk losing some staff,” says Creighton.

“But we know we’re going to have to design a hybrid space for these people,” he says. “We want to try to promote people coming to the office at least part time, but we need an attractive place for them to come.”

This means being close to transit and amenities such as restaurants and breweries, and include areas where staff “can randomly collaborate.” It also means adding semi-private, more quiet spaces so engineers can focus and be productive or continue to conduct virtual meetings.

Bringing back parts of the workforce for less time may not be enough to sustain the small businesses that populate downtown in areas around office buildings.

Revenues for one in four small businesses surveyed in April are currently being hit because of a slow return to the office by downtown workers despite the lifting of COVID restrictions, according to the Canadian Federation of Independent Business.

Owners in some sectors are suffering even more, with 46 per cent of those in hospitality and 31 per cent in personal services feeling a continued pinch.