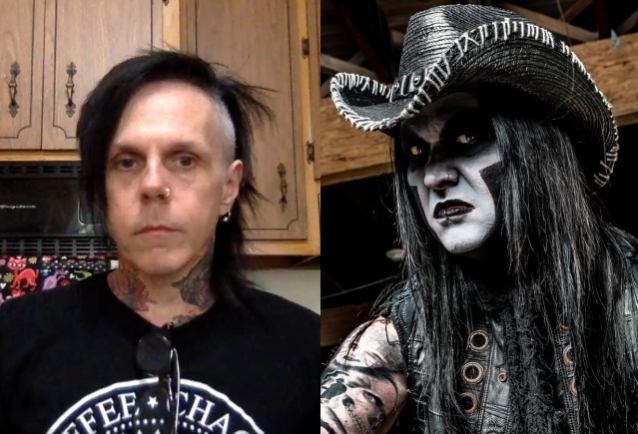 form MURDERDOLLS guitarist acey slade has responded to founding vocalist Wednesday 13‘s criticism over his decision to launch a web site and staging an event to celebrate the 20th anniversary of the release of MURDERDOLLS‘firstalbum, “Beyond The Valley Of The Murderdolls”.

This past week, it was announced that slade and former MURDERDOLLS bass player Eric Griffin will take part in a signing on Sunday, August 28 at the Silver Scream convention at the Hilton Double Tree North Shore in Danvers, Massachusetts. The event will be livestreamed on several platforms, including Youtube, TikTok and Instagram. Acey and Eric will also be doing a meet-and-greet after the announcement for those in attendance at Silver Scream Con. In addition, Acey and Eric have launched a web site, murderdollsofficial.com, that purports to cater to all of the MURDERDOLLS alumni and their legion of fans affectionally known as The Ghoulscouts.

On Thursday (August 25),Wednesday 13 took to his social media to throw shade at his former bandmates, insisting that any merchandise being advertised using the MURDERDOLLS logos, music and lyrics is unapproved and unauthorized.

“It’s unfortunate that this has to be said, but here it is: MURDERDOLLS was created in 2002 by joey jordison and Wednesday 13,” he wrote. “The name, the look, the lyrics, the music was all created by joey jordison and Wednesday 13. anyone besides wednesday or Joey claiming to be the Official MURDERDOLLS is NOT OFFICIAL. Any merchandise being advertised using Joey and wednesdayit’s original MURDERDOLLS logos, music and lyrics is NOT Approved or Authorized.”

On Saturday (August 27),Acey reply to wednesdaysaying that the re-release of “Beyond The Valley Of The Murderdolls” is officially licensed after he went through a “time-consuming and expensive” process reinstating the assets from Warner Music Group which acquired fully Roadrunner Records in 2010 after first buying 73.5% of the company in January 2007.

slade wrote on his Facebook page: “Hey Gang, Acey here and I would just like to clear the air on some things.

“The MURDERDOLLS as a band does not exist. There are no current members, only alumni. There are no plans for a tour, new single, nothing of the sort. That’s the bad news. Now for the good news. It became apparent before 2020 that none of the Alumni wanted to shoulder the responsibility of maintaining the legacy or the business of the band. All of the business/legal ends of the band were abandoned. Reinstating the assets was time-consuming and expensive as you can imagine. It also came to my attention that we were approaching the 20th Anniversary of ‘Beyond..’. I reached out to Warner Brothers to see if they had any plans for a re-release and I was informed they did not. But they also indicated that they would be elated if I would like to license the album and all of its assets. This means the re-release of ‘Beyond the Valley of the Murderdolls’ is officially licensed! And with that, any images, photos, music videos, artwork that came with the album. We spent months trying to track down the original master tapes. But no one seems to have them. That should also give you an idea of ​​bad a state the business affairs had failed.

“I’d like to invite Jack, Racci, Roman, Jason, Eric and obviously wednesday and dizzy to join in on this celebration. And should they ever need to use the band as a platform for their own endeavors, it would not only be welcome but encouraged, but that will be their choice. Reconnecting the alumni with the MURDERDOLLS fans and us extending the legacy of everyone who built it, is what this is all about. But most of all, I’d like to invite everyone to come together and Celebrate this landmark album!”

After the completion of the touring cycle for “Beyond The Valley Of The Murderdolls”, MURDERDOLLS went on hiatus so that guitarist joey jordison could focus on his other band SLIPKNOT. In 2010, MURDERDOLLS released a sophomore album, “Women And Children Last”which did not feature slade, griffin and drummer Ben “The Ghoul” Gravesall of whom played on “Beyond The Valley Of The Murderdolls”.

Just a few days prior to “Women And Children Last”‘s arrival, slade gave an interview to BlogTalkRadio‘s “Zombilly’s Horror Hour” in which he said that he wasn’t invited to take part in the making of the LP.

“We waited around a long time — myself, Eric and the ghoul — we waited around a long time to do this record. and when Joey and wednesday said that they wanted to do it by themselves, that was a bit of a… like, ‘Really?! That’s not what we discussed,'” he said. “But, quite frankly, it’s like, okay, well, it’s been seven years. You can’t hold somebody to something they said seven years ago. It’s like, ‘Okay, cool.'”

Acey went on to say that he didn’t like the material on “Women And Children Last”. “I think it sounds like all the things that the band said that we weren’t gonna be,” he said. “When I was in the band, it was, ‘We don’t drop-tune — we tune standard ’cause we’re a rock band — it’s all tongue-in-cheek, nothing’s serious. And now it’s drop-tuned, it’s serious subject matter, and it’s not something I wanted to be a part of. It’s like, wow, we were supposed to be a fun band that pissed people off, not a pissed off band that is writing… know… It sounds like DISTURBED take. it sounds like DISTURBED with Rob Zombie vowels. That was the other thing, too. [Laughs] Everybody was, like, ‘You guys are like Alice Cooper meets ROB ZOMBIE,’ and we weren’t. And it seems like all the negative things that people thought about us before they heard us, the band has now become. I’m not interested in that. I have a lot more creativity than that. And those guys do, too. So I’m a little disappointed in them. But you know, hey… whatever. I guess they’re happy doing it, but it’s not something that I would want to be a part of. And it’s like, weird, the whole Joey and wednesday… They’ve got pictures of just Joey and wednesday. I think it’s pretty clear that they didn’t want anyone else at the party; they want it to be an exclusive thing for them, I suppose.”

Wednesday 13 reunited with griffin and slade on stage for the first time in over a decade in August 2018 at Lucky Strike Live in Hollywood. The event, which celebrated the life of basssaw the trio performing some of MURDERDOLLS‘classic songs.

basswho also worked with PRETTY BOY FLOYD and DOPE, passed away in May 2018 after a year-long battle with cancer. He was only 45 years old.

the MURDERDOLLS did a number of major tours in support of “Beyond The Valley Of The Murderdolls”. By the summer of 2003, the tenacity of the band was paying off. Tours with IRON MAIDEN, PAPA ROACH and the FOO FIGHTERS around the world and a Top 40 UK single with “White Wedding” made the band fan favorite in metal hammer, Metal-Edge, Kerrang! and rock-sound magazines.

Acey here and I would just like to clear the air on some things.

The Murderdolls as a band does not…

It’s unfortunate that this has to be said, but here it is:

Murderdolls was created in 2002 by Joey Jordison and…