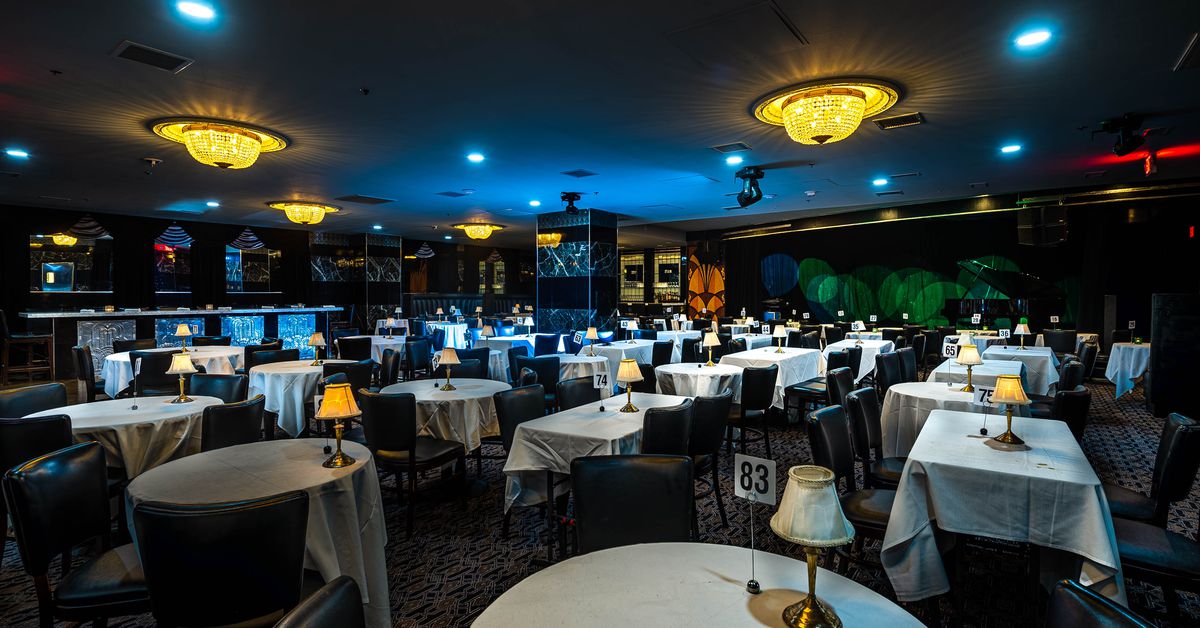 The foot of Farragut Park is now home to Brennan’s Bar and Carlyle Room, a sophisticated, two-part project that appears plucked from a bygone era.

The ambitious downtown venture breathes new life into the 12,000-square-foot space formerly occupied by Pennsylvania 6 (1350 Eye Street NW). Upon entry, curved Carlyle Room signage studded with silver starbursts leads the way to a marble-wrapped, white table clothed venue dripping with sparkly chandeliers, where an extravagant surf-and-surf menu comes with a side of live music a few nights a week . Up front, European-style brasserie Brennan’s Bar is a more casual, all-day affair that opens at 11 am daily.

The distinct spaces with separate dishes and drinks share the same elegant, art deco ambiance that its owner Brennan Reilly adores. He opened the original Carlyle Club in Old Town in 2007 and decided to relocate the entertainment venue to the tourist-heavy heart of DC The reboot carves out a room for a soaring new sibling bar that spans Eye Street NW.

The catch-all lineup at Brennan’s Bar jumps from Parisian classics like bouillabaisse, croque monsieur, French onion soup, and puffy gougeres to across-the-pond favorites like beer-battered fish and chips, crab-topped rarebit toasts, sticky toffee pudding, and Scotch eggs with piccalilli. Versatile bar snacks also include deep-fried chicken wings with kimchi barbecue sauce and veggie bruschetta. Hearty entrees include a filet mignon, New York strip, and grilled half- or 1-pound lobsters (plus a lobster roll). Entrees are $15 and up and appetizers start at $6, with happy hour coming soon.

Joe’s [Seafood, Prime Steak & Stone Crab] or Old Ebbitt is the style we’re going for,” director of operations Fergal Dooley tells Eater. “It’s not your typical American food but not that far removed.”

“We aren’t changing the world but just taking ingredients people like and doing something different with them,” says Dooley.

“He’s delighted because he hated sitting around during the pandemic,” says Dooley.

Brennan’s is open daily starting at 11 am until 11 pm Monday to Saturday and 10 pm on Sunday. Carlyle Room is open Wednesday to Sunday nights to start, with shows starting around $30. Featured acts, which cover a gamut of genres like jazz, oldies, Motown, big band, and R&B, aren’t your average bookings. On Wednesday, July 27, the former lead singer of the Temptations and Four Tops takes the stage.

Dinner theater kicks off with starters like beef carpaccio, Rockefeller oysters, and stone crab claws. Mains like beef Wellington, Chilean sea bass, and a filet-and-lobster duo come with a choice of sides like heirloom carrots, fingerling potatoes, or truffled mac and cheese. Guests, who can order any time during the performance, have a $25 spend minimum. (And that’s easy, considering appetizers are $12 and up and entrees start at $29.) A grilled two-pound lobster ($79) caters to the ultimate supper club spender. A long wine list is pretty reasonable, around $12 per glass and $40 per bottle.

Weekend jazz brunch will join the mix in September once more residents return to the city, says Dooley. The Irishman worked as a hospitality consultant in London before moving to DC five years ago to refurbish the Dupont Circle Hotel’s food and beverage programs. Brennan’s plans to roll out a “Wellington Wednesdays” special inspired by the one served at Holborn Dining Room, an old bank-turned-posh British brasserie Dooley helped open under now-celebrity chef and cookbook author Calum Franklin. (DC will get another beef Wellington destination this fall when shouty TV chef Gordon Ramsay plants a Hell’s Kitchen on the Wharf.)

Some members of the opening team have tricks up their sleeves. General manager Nathan Coons is also a trained chef and plans to help out in the kitchen. And Carlyle’s in-house band is made up of local vocalists and live production professionals on the payroll.

Owner Reilly, who was once a longtime lawyer, fell in love with all things art deco after frequenting historical NYC landmarks like the century-old Plaza Hotel. Chevron-shaped wallpaper, light sconces, and carpet patterns, soft draped curtains, antiqued mirrors, and vintage posters and plates displayed on bathroom walls contribute to a Great Gatsby-like look out of the Roaring 20s.

Office building tenants have their own interior entrance into Brennan’s, which directly faces the newly manicured Farragut Park and The Washington Post headquarters across the way.

Carlyle Room can seat about 180 on any given night and balloon to 240 for private events and weddings. There’s apparently not a bad seat in the house come curtain call, but guests can choose a specific seat online ahead of time just like they would for a modern-day movie outing. Seating arrangements include two-, four-, and six-top tables and booths. In true super club fashion, chances are you’ll be mixing and mingling next to strangers.

“It’s quite fun,” says Dooley. “I think we are offering something quite unique.”

Carlyle had 140 covers for its unannounced opening night in mid-July, says Dooley, many of which were Old Town regulars ready to return to the throwback fixture. A business model that would be impossible just two years ago appears to be back in full swing.