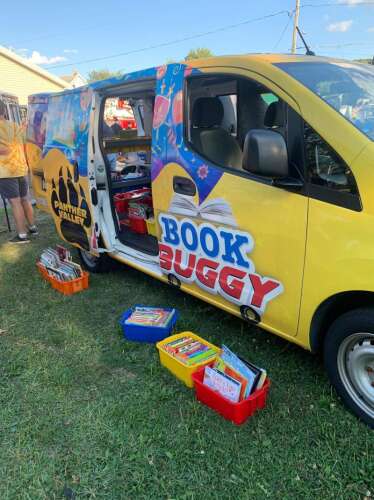 Steve Teeno grilled hot dogs until they became plump, fitted them into buns and handed them to attendees of Coaldale’s National Night Out on Tuesday.

“We made about 100 of them last year, and we have the same amount this year,” said Teeno, a member of Coaldale’s Community Crime Watch.

The organization sponsored the event at the Coaldale Complex, and hundreds attended throughout the evening.

Everything was free – from the hot dogs and drinks provided by the crime watch, to the slushies and cold coffees prepared by David Hempson of Hope & Coffee in Tamaqua.

Caitlin Tongue of Lansford brought her children, Grayson Tongue, 1, and Ella Rivera, 4. She pushed Grayson in a stroller and held Ella’s hand as the family stopped at booths set up by different community organizations.

The children were among the first in line for balloon animals crafted by Justin Credible of Incredible Parties.

“We are handing out junior police badges, and police cars the kids can put together,” Jungbaer explained. “We’re seeing a decent amount of kids.”

Children and teens could stop by the colorful Panther Valley Book Buggy to select a book to enjoy.

The book buggy – a library on wheels – frequently stops at community events, and will be a staple at upcoming Panther Valley High School’s home football games and sporting events, he said.

Representatives from St. Luke’s University Health Network had a prize wheel that young and old alike could spin to win gifts. The network also brought one of its Life Flight helicopters to the event.

The chopper landed on the field at 6 pm and was open for people to check out. Local emergency responders displayed their vehicles, too.

Caitlin Tongue and her children, Grayson Tongue and Ella Rivera, stopped to get balloon animals at Coaldale’s National Night Out on Tuesday. JILL WHALEN/TIMES NEWS