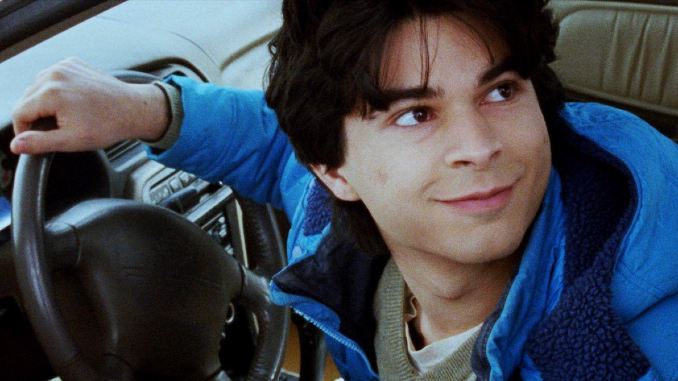 Robert (Daniel Zolghadri) should be sending his cartoons to MAD Magazine. So says his art teacher and his mentor, the affable, honest Mr. Katano (Stephen Adly Guirgis). Katano fosters the 17-year-old aspiring cartoonist’s evident gifts with a mix of superfluous praise and tangible encouragement. He pushes the high schooler outside of his comfort zone in order to help him grow—like when he questionably urges Robert to draw a caricature of Katano posing nude, the aftermath of which leads to a conversation that ends in tragedy. Before that, however, Katano reminds Robert that he’s already at a “professional level of drawing.” Robert is a comfortable kid from an upper class family in Princeton, New Jersey. And while seemingly self-critical, he is clearly priming himself internally to be the next big thing in comics.

That is, until Katano dies in a freak car accident in front of Robert. Suddenly, Robert’s mentally laid-out path and carefully cultivated orbit of adult approval is gone. Without Katano, Robert feels rudderless; college no longer feels quite as pertinent as it once did, and as it still definitely is in the eyes of his parents (but never was to Katano). Yet, before his beloved teacher perished, he asked Robert an important question which pulsates threateningly throughout Funny Pages like Poe’s tell-tale heart: “Who do you draw for?”

Who do you draw for? It’s an inquiry left unanswered in the film’s opening scene, a blank space which portends the narrative course of writer/director Owen Kline’s debut feature. It’s a grimy, splendidly textured film about a prodigious prep-school brat who abandons suburbia for the perceived authenticity of a struggling artist life that is as alien to him as the absence of external validation.

After Katano dies, Robert decides to take his life into his own hands. He promises his exasperated parents that he won’t be returning to high school after winter break, and he won’t be going to college either. Instead, he’s going to get a job and his own place from him and go the way of his cartoonist heroes—like Katano wanted for him all along. With a deal from his boss at the comics store, he acquires a near-dilapidated car to cart him to Trenton. There, the tantalizing promise of a subterranean shared apartment with questionable living standards and a second job, taking notes for public defender Cheryl Quartermaine (Marcia Debonis), hold the promise of Robert’s independence and burgeoning creative career.

Now the only thing that’s left is to find a mentor. Robert dubiously latches on to the troubled Wallace (Matthew Maher, impressively and consistently maddening), who is being represented by Quartermaine for a violent altercation at a nearby pharmacy. Wallace, though irascible, curmudgeonly and by all accounts a deeply disturbed if misunderstood person, becomes Robert’s Holy Grail. While taking notes for Quartermaine during a meeting with Wallace, Robert learns that Wallace once held the job of color-separator over at Robert’s prized Image Comics. Wallace was never an actual artist at the company, but his proximity to Robert’s industry of choice (and at such a prestigious establishment at that) is enough to turn the teen into a thorn in Wallace’s side. Not only is Wallace Adamant that he does not want to help Robert, but he is also unequivocal in his disgust towards even revisiting the color-separating part of his past life from him. Still, when Robert offers to pay him, Wallace realizes that he can (albeit, reluctantly) take advantage of the child’s shameless brown-nosing.

This depiction of talent reared by privilege and the entitlement it breeds feels personally informed by Funny Pages‘ writer/director: Kline is the son of actors Kevin Kline and Phoebe Cates. He began acting in indie films as a child, most notably in Noah Baumbach’s The Squid and the Whale. But he soon abandoned the acting world, staying in school, going to college and eventually pursuing filmmaking. He became friends with the Safdie brothers (who produced Funny Pages and slow a couple of their actors), and directed a handful of short films during the 2010s.

As a character, Robert is too acutely self-reflexive to be totally oblivious, yet there’s a certain pang of uncertainty when the dialogue—molded by another artist whose creative endeavors could be securely hewn from his own upbringing and connections—sharply critiques Robert’s social class . At the same time, Kline’s privilege affords him a more intimate look at this kind of person. And it’s made clear in this interview with both Kline and Zolghadri that Kline has had a deep, lifelong passion for and fascination with the comics industry, and the often fraught careers of the people who work there. Funny Pages unfolds as if Kline sought to make a film that acts as a dialogue between the world he grew up in and the world he holds a very earnest affection for.

Robert has the personality one might expect from a suburban kid with an easy life who has clearly always sustained precious talent. He’s outwardly humble but inwardly preening. He does an “aw shucks” routine when commended for his work by him, but spits venom at his best friend Miles (Miles Emanuel) who dares to attempt his own self-made comic book. Miles should know better than to try to steal Robert’s spotlight. No one in Robert’s circle can threaten to be as good at what he does, because what are his precious gifts from him if they’re something anybody can achieve?

Yet, Robert is self-consciously aware of the precariousness of his own innate skills—of talent that could fizzle into obscurity without someone or something to foster it. When Miles praises an old amateur comic Robert put together, Robert bristles. It’s only good in the context of high school, he says, and without high school, it “sucks shit.” Kline writes Robert as never quite wholly likable, but as possessing just the right amount of both realism and empathy; perhaps a character he might have a knotty sort of kinship with. Robert is as spoiled, ornery and ignorant as he realistically should be, but that’s not all that he is. At the core of his behavior, we recognize that he carries a universal fear of the future.

But Kline isn’t exactly soft on Robert. He exacerbates the character’s misplaced desperation for guidance from an “authentic” artist, repeatedly twisting the knife until we can’t stand him any more than Wallace can. Until we are practically begging to see him fail. Kline doesn’t want us to hate Robert, but he wants us to closely understand where he’s coming from. Robert’s internal quandary is his awareness of his privilege de el and the technical refinement necessary to turn his God-given gifts into genuine expertise, coupled with a misguided perception of how to do it himself, because he ca n’t.

Robert wants to be like his salt of the earth heroes, who scrimped and saved and didn’t need “art school” to become the best at what they did. Heroes who also, perhaps, drove shitty cars, shared basement apartments with sweaty, middle-aged men who masturbate together, and worked low-paying jobs while simultaneously developing their artistic abilities into hopeful career success. Robert fetishizes the kind of failure that Wallace has felt, one Robert will never experience. Failure “with soul,” as Robert vexingly describes it. It’s a struggle that Robert believes is necessary to turn him into a true artist, despite Wallace displaying an approach to art that Robert vehemently disagrees with.

Funny Pages never lets you forget that Robert is impaired by the cushy, oblivious handholding he’s enjoyed his entire life. When he threatens to get his GED instead of going to art school, his father assures him that he’ll then work in a gas station. “I’d love to work at a gas station,” Robert arrogantly replies. When Robert unwisely invites Wallace to his home from him on Christmas morning so that he may receive a drawing lesson, he explains that he lives in the middle class part of Princeton. “There is no middle class part,” Wallace bluntly retorts. When we eventually see the inside of Robert’s childhood home—a sterile, modern interior juxtaposed against the temporary placelessness of the film’s setting—we understand that he was born into a life in which his passions would always be nurtured. Out on his own, however, he has nothing. Without money from his parents or guidance from Katano, he’s more vulnerable than a fledgling.

Robert’s climactic failure at the end of Funny Pages is ironic. It’s his first true bout with the stuff (and it is comically absurd), one of many assumed stumbling blocks the young prodigy will endure on his path towards achieving his goals. It’s also a little cathartic: Robert, a sniveling wretch for most of the film, finds himself on the receiving end of Wallace’s fist. It becomes clear that Wallace’s departure from Image Comics is nothing but a painful memory. To Robert, it had foolishly signified something admirable, which he could both exploit and mistakenly aspire to.

The film otherwise ends abruptly, with Robert’s next steps uncertain as he opens the comic shop for business on Christmas, limping and sporting a face of purple and blue. Robert’s most crushing failure will most likely be his bruised body, as it’s unclear what he will take away from this strange time in his life other than (hopefully) the realization that—in spite of where he comes from and his glamorized perceptions of a starving artist—he shouldn’t be drawing for other people.

Funny Pages, possibly enhanced by its filmmaker’s status as a person who benefits from class and industry connections, articulates in no uncertain terms that art should be made for the artist—something Katano attempted to coax from Robert before his untimely demise. Kline even injects self-deprecation into Robert’s beatdown, aware of the unfair advantage Robert has been born into and cognizant that, at the very least, it’s satisfying to see a rich kid get punched in the face. But Kline’s debut feature is as perplexing, tactile, understated and caustic as the underground comix the director holds dear. Funny Pages sets out to cause a discomfort and unease that many will find inaccessible, but harbors a profound gentleness and fellowship towards both its subject and subject matter that finds the type of authenticity its lead has yet to uncover. Funny Pages feels like art drawn for its creator.

Brianna Zigler is an entertainment writer based in middle-of-nowhere Massachusetts. Her work by Ella has appeared at Little White Lies, Film School Rejects, Thrillist, Bright Wall / Dark Room and more, and she writes a bi-monthly newsletter called That’s Weird. You can follow her on Twitterwhere she likes to engage in stimulating discussions on films like Movie 43, Clifford, and Watchmen.