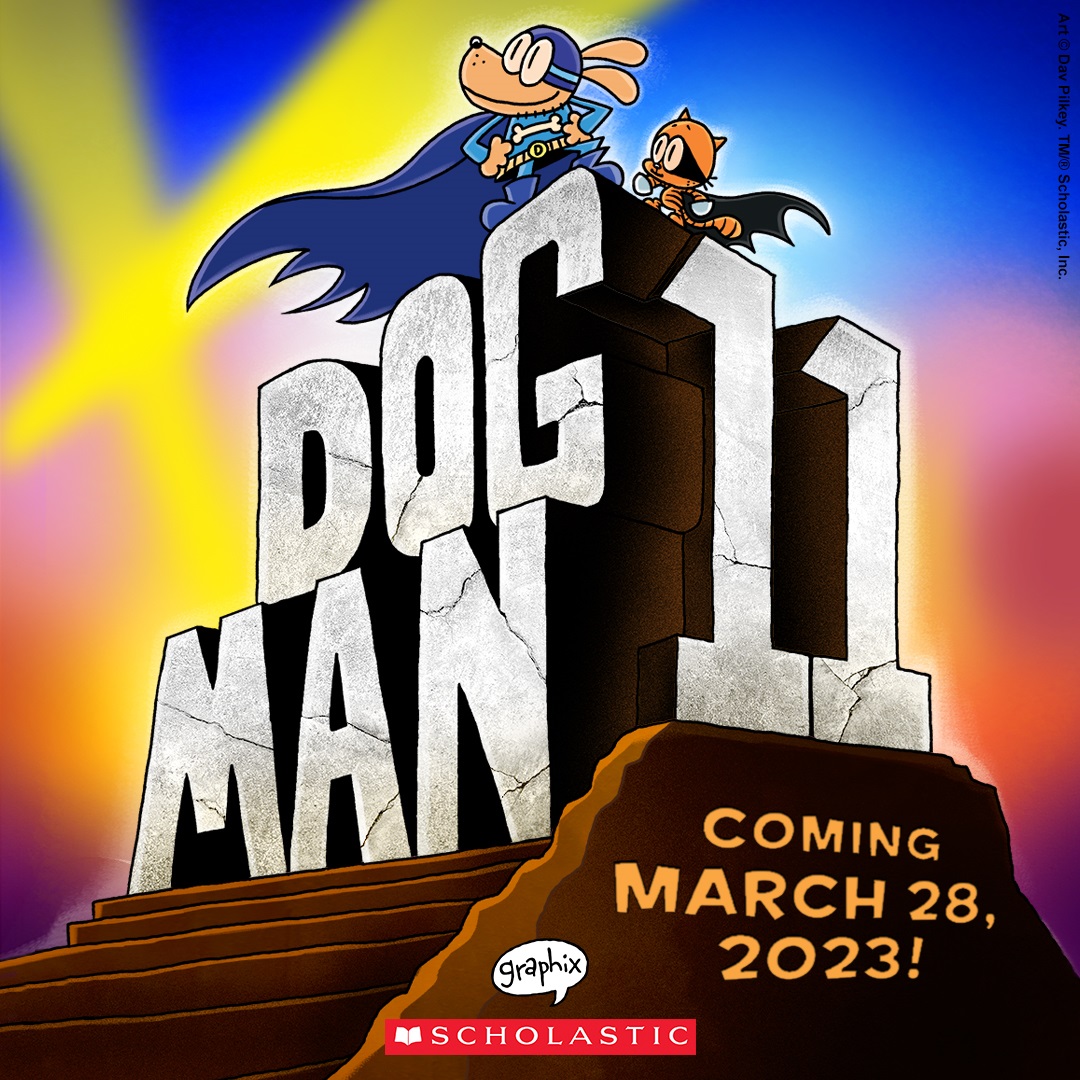 Scholastic has announced a new Dog Man book, the 11th in Dav Pilkey’s bestselling series, and the first in two years: Dog Man: Twenty Thousand Fleas Under the Sea will be released on March 28, 2023, simultaneously in the US, Canada, the UK, Australia and New Zealand, and Asia.

In addition, Scholastic announced the launch of Dav Pilkey’s Epic Comic Club, an online platform where children can upload their own comics. The COPPA-compliant site is designed to be a safe space for children to showcase their own comics and download activities such as comics prompts, badges and membership cards, and previews and book news.

The third item in Scholastic’s trio of announcements is the news that it will mark the 25th anniversary of the launch of Pilkey’s Captain Underpants series with a special edition of the first book, The Adventures of Captain Underpants, which will include a new 32-page comic featuring both Dog Man and Captain Underpants—in comics terms, their first crossover. The anniversary edition is scheduled for release on March 7, 2023.

The new Dog Man book comes two years after the previous one, Dog Man: Mothering Heights, which was the top-selling book in the US in 2021 and has sold more than two million copies to date. Currently, there are 50 million Dog Man books in print worldwide. Scholastic has also published three volumes of Pilkey’s Dog Man spinoff Cat Kid Comic Club, with a fourth book scheduled for November. The two series are very different: while the Dog Man books are goofy superhero stories, the Cat Kid books are set in a comics class where the students experiment with different ways to tell stories.

The Cat Kid books are more time-consuming, according to said Ellie Berger, president of Scholastic Trade. “Since the pandemic began, Dav has been working solely in his studio on Cat Kid Comic Club. Dav creates all the character models and scenes for the ‘mini-comics’ that you see in these books—all by hand, and that takes extra time. For example, Dav uses Claymation, photography, poetry, calligraphy, and watercolor to create different types of comics and to show kids that there are many ways to be creative.”

The Epic Comic Club will serve a similar purpose. “The goal of Dav Pilkey’s Epic Comic Club is to encourage kids around the world to be creative and have fun making their own comics and sharing their stories—all in a safe and moderated environment,” Berger said. Pilkey, who had dyslexia as a child, thought he hated reading until he found comics, she noted. “The panels in comics helped him learn to read, and comics made him fall in love with reading.”

Berger added, “We hope kids fall in love with comics and reading, as Dav Pilkey did. And by bringing together his fans from around the world, we hope to create the biggest comic club for kids.”

Like Pilkey’s books, which have been translated into 42 languages, the club will have a global reach. “For the initial launch of the Epic Comic Club, we are excited to be able to reach kids in the US, Canada, UK, Australia, New Zealand, and through Scholastic’s English language subsidiaries in Asia including China, Malaysia, India, South Korea , the Philippines, Singapore, and Thailand,” said Berger. “For the next phase after launch, we plan to collaborate with Dav’s foreign publishers to make the Epic Comic Club available in their respective markets and languages.”

The club will feature themes and activities based on all three Pilkey series, Dog Man, Cat Club, and Captain Underpants, Berger said.

And she has good news for fans of Pilkey’s graphic novels: “Dav plans to continue writing and illustrating more books in the Dog Man and Cat Kid series in the near future.”