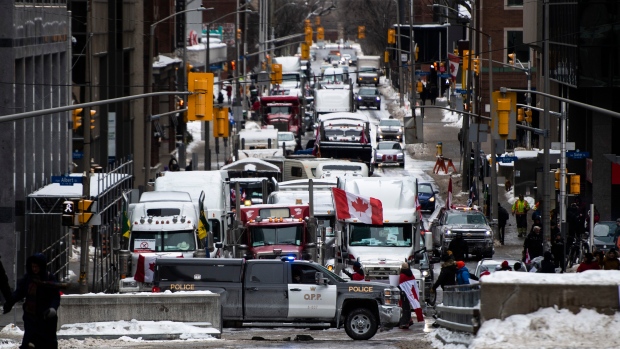 OTTAWA – The mayor of Canada’s national capital declared a state of emergency in his city on Sunday in the face of ongoing protests that have overwhelmed local resources shortly before police moved to choke the convoy’s supply chain.

In a late-afternoon release, the City of Ottawa said Mayor Jim Watson’s declaration reflected the “serious danger and threat to the safety and security of residents” from protesters encamped through much of the downtown core.

The move gives the city some flexibility to more quickly procure supplies, some of which the brief release noted could help purchase equipment required by frontline workers and first responders.

But anything beyond that isn’t clear, given that the city’s legal staff on Saturday told the police services board an emergency declaration, beyond its symbolic value, doesn’t give police or the city any new legal powers.

Watson’s declaration marked the end of the second weekend of the so-called Freedom Convoy taking over much of the capital’s downtown core, with trucks clogging streets and protesters occupying sidewalks in front of Parliament Hill and into nearby residential areas.

On Sunday night, police in Ottawa started their crackdown on supplies, raiding a parking lot used by organizers as a logistical hub to seize liters of fuel and arrest two people for mischief.

Five others were arrested, including two downtown, where police also appeared on Sunday night to be taking fuel used to keep cars idling in the bitter Ottawa cold. Police had earlier in the day threatened arrest for anyone bringing items like gasoline or supplies to protesters and the 500 vehicles downtown.

Other protests took place elsewhere in the country Sunday, though on a smaller scale than the day before when thousands of people opposed to pandemic-related restrictions congregated in cities from coast to coast.

Hundreds of trucks and cars caused a backlog in downtown Halifax, but officers were working to clear that out, said Const. John MacLeod. He said the situation had been peaceful with no incidents to report.

Ontario Provincial Police closed part of Highway 402 running to the border crossing between Sarnia and Port Huron, Mich., as a safety precaution due to pedestrians on the highway near a convoy of trucks and tractors.

In Ottawa, police said they have launched more than 60 criminal investigations related to the protest, and issued more than 100 tickets on Sunday alone, including for “excessive honking.” Hundreds more tickets were issues Saturday for red light violations, driving a vehicle on a sidewalk and setting off fireworks, among other offenses.

Even though the local force has been bolstered by more than 100 OPP officers and 250 RCMP officers, Ottawa’s state of emergency declaration noted that Watson’s decision underlined the need for support from upper levels of governments.

Earlier Sunday, Ontario Premier Doug Ford said the province has backed Ottawa during the nine-day protest that critics have branded an occupation.

“While we cannot direct the police, we have provided the City of Ottawa with everything they have asked for and will continue to provide whatever support they request,” Ford said in a tweet.

After Watson’s announcement, Ford’s office said it had nothing to add.

The Prime Minister’s Office directed questions to the office of Public Safety Minister Marco Mendicino, which late Sunday pointed to the extra Mounties sent to Ottawa and said the federal government was ready to provide more help.

“While this past weekend saw peaceful protests in cities across the country, the situation in Ottawa remains very concerning,” Mendicino spokesman Alexander Cohen said in a statement.

Horns echoed through the city’s core on Sunday, mixed with the rumbling of semis and shouts of freedom. Organizers had said they planned to stop the honking for Sunday prayers, but that faded early in the morning.

St. Patrick Basilica made the decision Friday to close over the risk of civil unrest, while the Christ Church Cathedral opted for online services despite provincial restrictions easing to allow for in-person prayers.

Beth Bretzlaff, rector at Christ Church Cathedral, said it wasn’t safe to bring parishioners downtown on Sunday. Still, she said, what’s needed is a bit of faith in good governance, good policing and people being responsible.

“Let’s let the people that need to deal with this deal with this, and support them and watch out for each other,” said Bretzlaff.

Businesses downtown have also closed, including the Rideau Center mall. Owner Cadillac Fairview cited the ongoing protest late Sunday in deciding to keep the mall closed for the foreseeable future, leaving thousands of employees out of work.

The encampment in Ottawa has been a hot topic among some Republicans in the United States. More than a few supportive members of Congress of former president Donald Trump have made a point of expressing solidarity with the protesters, and in some cases, their pointed disdain for Prime Minister Justin Trudeau.

Sen. Ted Cruz on Sunday decried a decision by fundraising platform GoFundMe to cut off donations to the convoy organizers, to move the company said it made because of police reports of violence and other unlawful activity.

Appearing on Fox News, the Canadian-born Cruz said he asked American regulators to see whether GoFundMe had engaged in deceptive trade practices before praising those in Ottawa and elsewhere.

“They are patriots and they are marching for your freedom and for my freedom,” he said.

Despite the decision by GoFundMe to cancel the main fundraiser for the convoy, dozens of others are on the website and similar fundraising platforms aimed at helping either individuals or the group overall.

This report by The Canadian Press was first published Feb. 6, 2022.