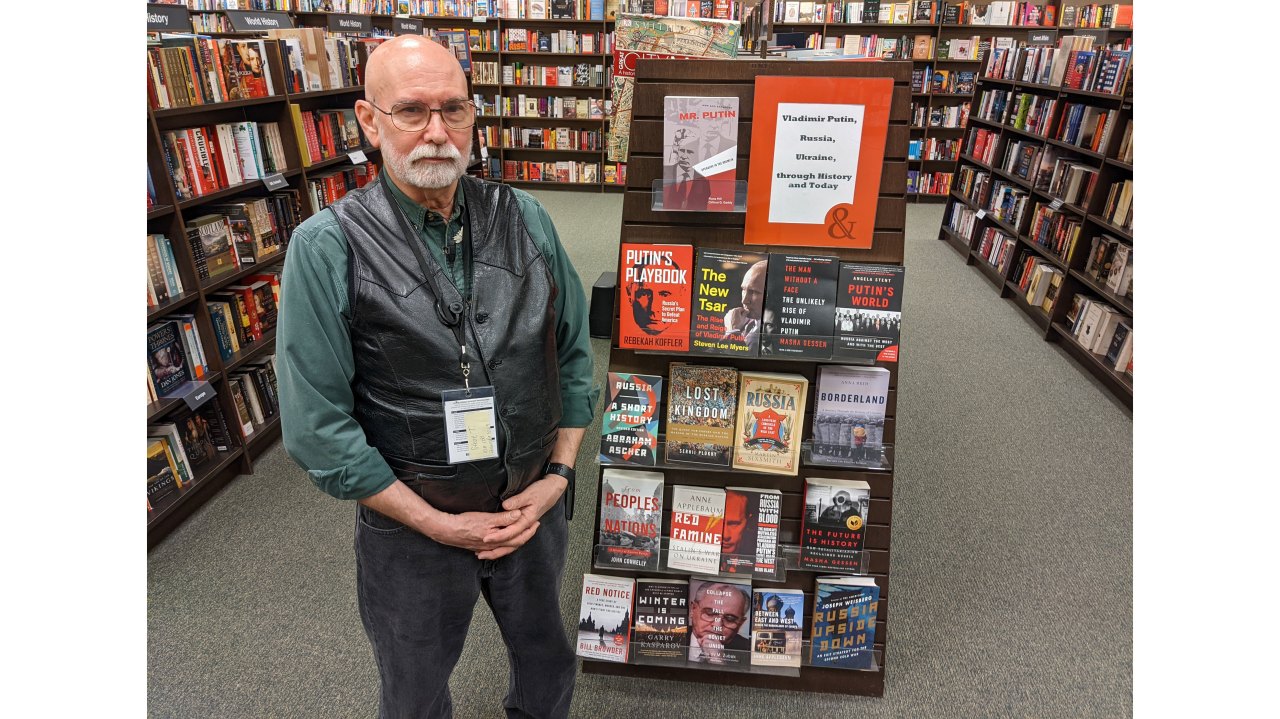 The display is curated by Steve Thulin, a recent addition to the local store’s staff.

Thulin is a retired professor of history who spent some 30 years teaching at Northwest College in Powell, Wyoming. Thulin still teaches remotely and is included on the Northwest College Emeriti list. Thulin had lived in Cody, Wyoming while he was teaching full time.

When Thulin retired, he moved from Cody, Wyoming to Billings, Montana but says the city wasn’t a good fit. He researched where he might want to live and landed on Erie.

“I like Erie. It’s about the same size as Billings, but it still has a neighborhood feel,” Thulin said. “In Billings, it’s lots of box stores. I was working in a Barnes and Noble there, and they let me transfer to this store.”

Thulin also noted that Erie is in close proximity to family in Vermont, Virginia and North Carolina (close compared to living in Montana or Wyoming).

Working at a bookstore has been his “sanity gig after retirement,” he said.

“I’m having a blast,” Thulin said. “Not only does this allow me to keep my hand in teaching, but it also helps me keep up on the literature.”

When he came to the Erie store, he was given permission to reorganize the history section (located on the lower level). Thulin said he organized the books chronologically and by subject.

“People who like history, they like it by subject matter,” Thulin said. “Management has been really supportive. I have lots of autonomy and they’ve been supportive of my ideas. They respect my professional expertise.”

He’s been given the task of ordering books for the history section which has allowed him the ability to truly curate the collection. Some of the books on the endcap are published only on demand. Thulin said he’s been able to order a copy of those books for his collection from him to have them on the shelf for people who may be browsing and unsure of what they want.

“They actually print the book after you order it, so it can take two weeks to get it,” Thulin said. Now, a copy is on the shelf in Erie for immediate purchase. “There’s the serendipity of encountering a book you didn’t know existed.”

He said he has selected titles and particular authors that he knows will be successful. Thulin also noted that his professional experience has informed his healing in other ways.

“I’m always mindful of what a freshman or sophomore student would read, as opposed to what a PhD would read,” Thulin said.

Earlier this year, Russian military forces invaded Ukraine. Ukrainian military forces have been battling against the invasion. The US and European nations have supported Ukraine through supplies and financial backing, and they’ve levied significant sanctions against Russia, but they’ve stopped short of direct military intervention. Thulin said his current display of him was inspired by the current situation.

For several reasons, Thulin says, Erie residents should be concerned about the situation in Ukraine.

Shortly after the Russian invasion and resulting sanctions, gas prices spiked. Talks have been underway to pause the federal gas tax. Locally, it’s been proposed to lower the commonwealth’s gas tax, but the commonwealth’s transportation budget is funded through the gas tax. Thulin worried that could impact infrastructure improvements.

“There’s a pothole or two on my way to work,” Thulin said.

Further, Thulin said, the US intervention will impact the defense budgets at the federal level.

“Even at the levels we’ve established, it’s significant,” Thulin said. “People in Erie have a vested interest in understanding international affairs, whether in Ukraine or the South China Sea.”

And Thulin is happy to educate anyone who may be interested in the topic.

“When people come into the store, I’m happy to stand right here (at the endcap display) and talk to them about each of these books,” Thulin said.