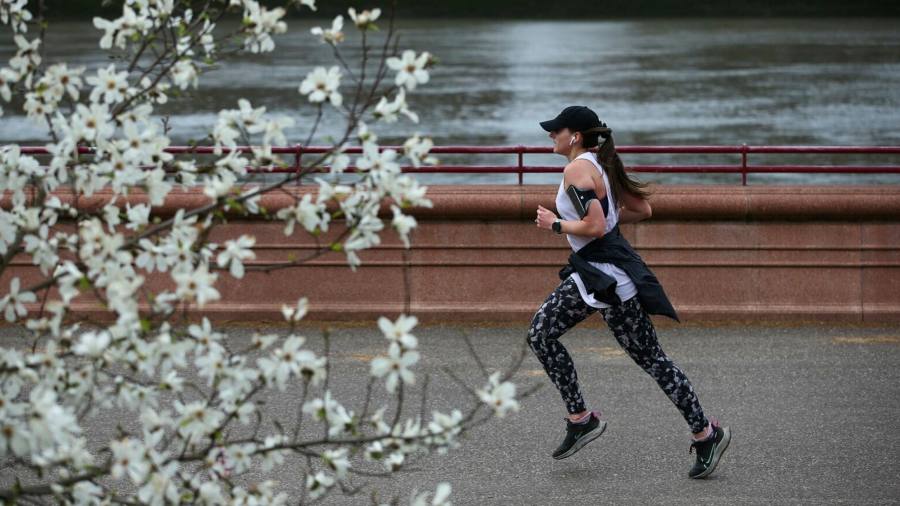 In the first lockdown, I became trapped. Inside my head. Stuck indoors, work was intense; so was home-schooling. Thoughts piled up, with no release. At the end of the working day, often late at night, I would take a short walk to clear my mind, keys clutched between my fingers in case of an attacker, only to return home, my brain crammed ever fuller.

Observing my sedentary days and lower moods, my partner suggested I run up and down the stairs between maths sessions or video calls or late at night.

Plod, plod, up I went. Boom, boom, down. It was so dull (surprise) I gave up after a few days. So I can understand the 37 per cent of women who recently reported to Nuffield Health that their physical health had worsened in the last year, with 47 per cent doing no vigorous exercise.

Everyone hates an exercise convert, droning on about endorphins, mental release, physical strength. That bore is me. Because after my stair-plodding failure, I snapped. It was a mix of claustrophobia, the photo that made me see I was pumped through Corona-snacking and not in a good way, and the realization I’d become a do-as-I-say-not-as-I-do parent. How could I extol the virtue of moving while slumped on the sofa? So I became a pandemic cliché and downloaded the Couch to 5k app, like 2.36mn others between March 2020 and July 2021.

I still had to overcome the embarrassment factor. Forty per cent of women who responded to the Nuffield report said it was a barrier to exercise (compared with 29 per cent of men). I forced my son to accompany me on the runs, reasoning that onlookers would be less likely to laugh at an eight-year-old. It worked. Or perhaps it was the global health crisis that meant people had other things to think about, or maybe no one really cared. But over the weeks my confidence grew so that I stopped using my son as an embarrassment shield (anyway, the whingeing was driving me insane), and progressed to longer runs.

Time was one reason women gave for not exercising (55 per cent of women, compared to 46 per cent of men). In the pandemic, it seemed in short supply, particularly among women who were more likely to be taking on a greater share of the childcare and housework alongside work.

Speaking to a financial services worker for a story on the stresses of lockdowns fortified my determination to make time. Her husband prioritized sport because it equipped him to do all the other things in his life, whereas she viewed it as self-indulgence at the bottom of the to-do list. Equality, she realized, wasn’t just about work and childcare but also exercise. The wine-o’clock and gin-time mothering culture that has crept up on social media, alongside the kind of self-care that pitches hot baths and chocolate as “me time” is enfeebling not empowering: a way to reward women for their domestic chores with an activity they can pursue at home while the kids are in bed. When lockdowns reappeared, I decided to BMM (Be More Mamil, middle-aged men in Lycra) and get out and start exercising.

Helen Thorn, a comedian who took up exercise to manage her anger and sadness after her marriage broke down, and ran her first marathon at 42, plans out her exercise every week. “I will get up at 5, so I can squeeze in a run. I run at night. Before a date, I will go for a run; I’ve got all that nervous energy.”

I had always believed running was an innate skill. You were either born a gazelle or a waddling walrus. (I’m more of a carthorse now.) Perhaps a result of schooling that made exercise something to be endured in the cold overseen by a withering teacher, or from an era when it was a means of weight control.

But even now, attitudes may not have shifted among the young, despite the Lionesses’ win which indicated progress for women in football. Nuffield Health found 27 per cent of boys expect to play sport over summer — more than double the number of girls, with 43 per cent of girls feeling embarrassed, compared to only 28 per cent of boys.

We used to say fat was a feminist issue, but fitness is too. Yes, I sound sanctimonious. Yes, I might slump into old habits. But I have had an epiphany and I hope other time-starved women have one too.