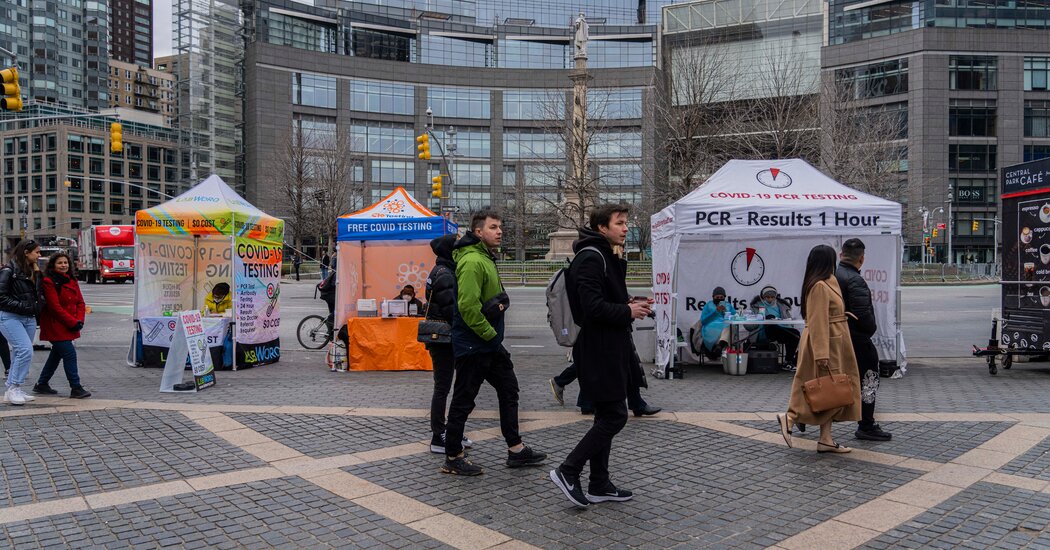 New York City officials are working to bolster the city’s testing infrastructure as coronavirus cases rise — largely fueled by a highly contagious subvariant of the virus — but an election-year dispute in Washington, DC, means some New Yorkers may have to pay to get tested .

Because federal emergency aid for testing, vaccines and therapeutics is stalled, certain providers are no longer able to provide testing to everyone free of charge, regardless of their insurance status. But New York City officials have said that tests at city-run sites will remain free for all.

Coronavirus cases in New York City have risen 77 percent in the past two weeks, according to a New York Times tracker. The increase is largely driven by BA.2, a highly contagious subvariant of the Omicron strain, and a loosening of pandemic restrictions.

City officials have said that testing is a crucial tool not only for tracking the spread of the virus, but also for stopping transmission. Here’s what you need to know about getting tested in New York City.

Senators struck a $10 billion deal this week on emergency aid for testing, vaccines and therapeutics, but it has stalled amid an election-year dispute over immigration policy. With Congress set to leave for a scheduled two-week recess, final passage might not occur until later this month, meaning some uninsured people may have to pay out of pocket for tests.

Mayor Eric Adams and health officials announced on April 1 that the city wouldn’t let the delay in Washington prevent the city from providing free testing and vaccination services through New York City Health and Hospitals.

“We believe that health care is a human right, and we serve every New Yorker regardless of their ability to pay or their immigration status,” said Dr. Mitchell Katz, the hospitals’ president and chief executive.

A number of other providers offer testing across the city. The city’s website includes a list of them, including ones that aren’t part of the city’s health system. The state health department also lists testing sites on its website.

But if you are getting tested at a site that is not run by the city or state, it is best to ask ahead of time whether you will be charged. It is also a good idea to check with your insurer about whether there will be any fees involved for testing.

New York State officials have run a number of mass testing sites, including in New York City, throughout the pandemic. They scaled down many of them as the winter Omicron surge waned. The state has the capacity to reopen the sites through June if needed.

Do testing sites have rules about who is eligible?

City officials have suggested that all New Yorkers get tested, including those who do not have Covid-19 symptoms or are at increased risk of developing serious illness from the virus.

And sites that aren’t run by the city or state may have other restrictions for testing, such as requiring recent exposure to the virus, so it is best to ask ahead of time.

What about the Covid testing tents I see on the sidewalk?

Policies at the various private testing tents on sidewalks throughout the city vary widely, so check before you swab.

Outside Columbia University’s gates in Manhattan, workers at two of three testing tents said they were continuing to offer free tests to people without insurance.

Workers at C19Testing, which had a blue and orange tent, and LabQ Diagnostics, which had a blue and red tent, both said there had been no policy change. But across the street, a worker at a RapidNYC tent, which was black and red, said he could not run the tests without insurance information.

The organization’s website explained further: “We will only be able to accept patients who are fully insured and have been exposed to COVID-19 for testing.”

Also look out for possible hidden charges. In Times Square, a worker at a green and white EZTestNY tent on 41st Street and Broadway said he could run a PCR test for free with no insurance, but a rapid test would cost an uninsured person $30.

The company’s website, however, said that uninsured patients could no longer be tested at all without payment or a billing agreement as of March 18. “We regret any inconvenience that this may cause our valued customers,” the company wrote.