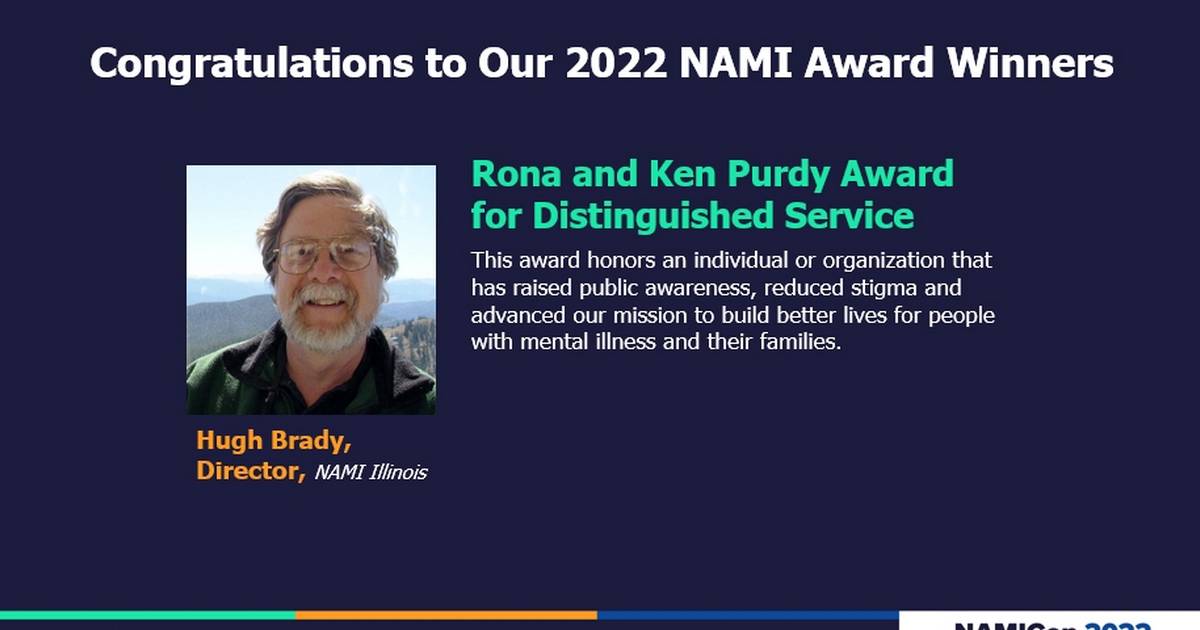 Hugh Brady, board member of NAMI Barrington Area, was honored this month with the Rona and Ken Purdy Award for Distinguished Service, an award given at the National Alliance on Mental Illness’ annual conference. The award honors an individual or organization who has raised public awareness, reduced stigma and advanced NAMI’s mission to build better lives for people living with mental illness and their families.

Hugh Brady lives with his wife Renee in Inverness, Illinois, a suburb of Chicago Illinois. He has been involved with NAMI in multiple ways for sixteen years. He is an advocate for a family member living with schizophrenia. He helped found the affiliate NAMI Barrington Area in 2006, was president for three years and has remained on the board of directors ever since. In 2010 he joined the board of directors of NAMI Illinois, and has served as board president for five years. His board membership of him at NAMI Illinois continues; he served one year as an ex-officio member due to term limits, but was reelected as soon as he was eligible. He is a key member of many mental-health-related organizations.

His career was spent teaching history and civics, a great foundation for the work he has done since retiring. He has a collegial style — not seeking personal recognition, but focusing everyone on the cause-at-hand and ensuring progress is made. His use of the term “NAMIans” when referring to his colleagues from him on a mission is his brand from him.

Focusing on advocacy, housing and criminal justice reform, Hugh has a system perspective of what is needed and steps in where there are shortcomings. The list is long where he saw a need for change. His strength from him is in articulating issues needing attention, interesting others in joining him to do something about it, and mentoring those carrying through on the initiative. He started locally, but then found interest in his ideas from him statewide, and is now actively working with NAMI National to transfer knowledge to others so they can solve similar problems in their State.

He chairs the NAMI Illinois Legislative Committee, is active with the Mental Health and Substance Abuse Advocates (a group) and the Mental Health Summit (a statewide organization that tracks all Illinois House and Senate mental health bills and provides prioritization and education to legislators regarding these bills). Through this activity he is well known and respected throughout the legislative process, including with the Governor’s staff. This allows NAMI to have access and participation in the process, allowing us to make sure legislators or the Governor’s staff are aware of the need for action. He has organized a process where when key legislative committee meetings are scheduled, NAMI affiliates in the state in coordinated fashion all each “slip” NAMI’s interest in a bill under consideration and whether we are proponents or not — this has been enormously important since the legislators know NAMI looks out for the families and the persons living with a mental illness.

NAMI, and Hugh in particular, has been asked by the legislators to help mediate when various other parties disagree, and the disagreement is holding up progress. The list of bills passed during Hugh’s involvement is truly remarkable. Notably, the establishment of a Mental Health Executive reporting to the Governor, overseeing all of the various State departments and activities, and empowered to close gaps, resolve conflicts and set priorities. Additionally, a model law requiring insurance companies and providers to follow established medical treatment guidelines. He also helped pass improvements in parity legislation to the point where Illinois’ parity laws are among the strongest in the nation, as well as improvements in mental health services at Illinois’ public colleges and universities. Hugh also worked on a statewide pilot program to provide supportive housing coupled with wraparound services for the heaviest users of mental health and substance abuse services.


Twelve years ago Hugh and a few others who saw the need created the North/Northwest Suburban Task Force on Supportive Housing for individuals living with a mental illness. Stigma was holding up development of this housing. They created a 501c3 nonprofit made up of representatives from several area NAMI local affiliates (the NAMIians) and work with local developers to create permanent supportive housing apartment buildings for people living with mental illnesses and other disabilities. So far they have been the catalyst behind the creation of four completed Permanent Supportive Housing apartment buildings, containing 147 apartments, and are working on two more. The process involves significant community awareness, education on items causing stigma, and in one situation required prevailing in a lawsuit against a city government to be able to proceed. The model of this Housing Task Force has been shared with others tackling the same issue. Hugh has presented the Housing Task Force approach at several NAMI conventions.

Hugh is on the Board of the Illinois Association of Problem-Solving Courts, an umbrella group of people from specialty courts — mental health courts, drug courts, etc. He is the unofficial NAMI representative. The other people on the Board are connected with the specialty courts, probation officers, judges, court clerks, public defenders, prosecutors, police officers, etc. The group has an annual statewide conference, and Hugh has done breakout sessions on mental-health-related matters several times. Hugh heads up legislative activities for this group.

Hugh Brady’s work has helped countless people who live with mental illness in Illinois, and their families. The advocacy that Hugh has tirelessly strived for has even reverberated nationally, setting a standard that helps all people who live with mental illness, breaking stigma and helping people get the care that they need. The value of Hugh’s work is truly incalculable, and as such the Rona and Ken Purdy Award for Distinguished Service is much deserved.