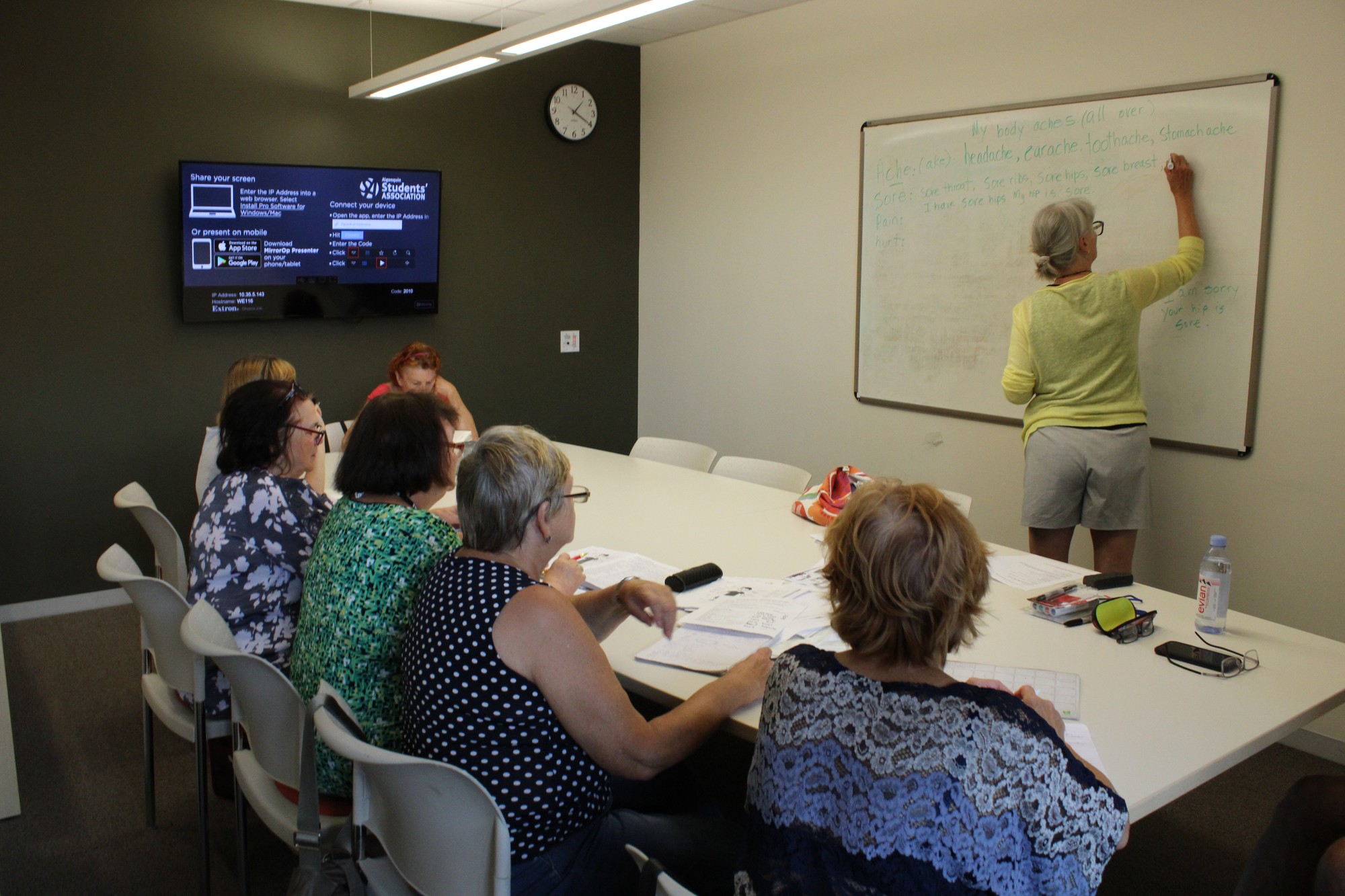 A group of Ukrainians learning English at Algonquin College study the teacher’s notes on a white board.

The Algonquin College Spiritual Center is hosting Making English Easy for Ukrainians, attracting hundreds of Ukrainians forced to leave their country since the war began earlier this year, according to the centre’s staff and volunteers.

An estimated 3,200 Ukrainians have arrived in the Ottawa area since February. In order to integrate into regular life in Canada, they must learn English or improve their existing skills as fast as possible.

From 1 to 2 pm on Tuesdays and Thursdays until August 15, qualified teachers offer English lessons to one of several groups, split by their ability, ranging from beginners with little to no English skills, to more advanced English speakers who have trouble with something specific , such as words that sound the same but mean different things. Learners spend the hour practicing what they’ve learned with one of more than 30 volunteers from the community. Coffee and snacks have been donated by local churches.

“The first Tuesday we had 18 and by the second Tuesday we were up to 40 students,” said Yolande Parsons, Coordinator of the Spiritual Center. “Some people have gotten jobs, which is really good news to hear.” More than 400 Ukrainians have come to learn English through this program, according to Campus Chaplain Yuriy Derkach.

Gary Miller, one of the volunteer English teachers, usually works with intermediate-level students.

“We talk about any sort of subject that is a concern, we help with pronunciation, we get people to talk about everyday subjects and just try to encourage them,” Miller said. Sorting people into levels helps make the lessons as valuable as possible for everyone. “If you have a mix, it doesn’t work. If you have to slow down for the beginners then the others just get frustrated and bored.”

Many of the volunteers are retired from teaching, and wanted to offer help to Ukrainians arriving in Canada due to the war.

“We’ve had such a great group of volunteers who’ve come to teach,” Parsons said. “There’s one church in particular, St. Marks Anglican Church, they’ve sent a few retired teachers and some ESL teachers. There are a couple of people from the college community who have also assisted in teaching, but mostly it is the community that has responded.”

According to Derkach, at first they were supporting Ukrainians already studying at Algonquin College, but then when their families came to Canada, they needed help as well.

Some of the Ukrainians have shown their appreciation to the organizers who have guided them while they learn English. “Most of them are really, really appreciative of what we’re doing. I will never forget one day, one of the ladies showed up with flowers for me. I was really thankful for that,” said Parsons.