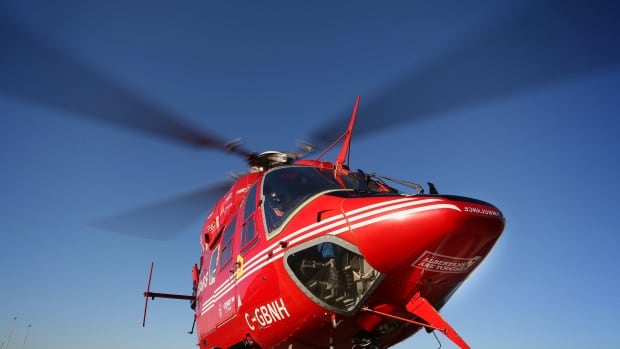 In a media release, RCMP said around 4:10 pm Saturday, a white truck overtook an SUV on Hwy 2, near the Hwy 581 overpass near Carstairs, Alta. RCMP say the truck then hit the brakes “aggressively” in front of the SUV.

The driver of the SUV attempted to avoid a collision and ended up rolling through the median ditch before coming to rest along the fence, RCMP said.

As a result of the SUV rolling, a child—who RCMP said was younger than five—was thrown from the vehicle and is in a life threatening condition.

STARS Air Ambulance brought the child to hospital, according to RCMP.

The four other occupants, two children and two adults are also in serious condition and were taken by ambulance to a nearby hospital.

RCMP said the suspect vehicle did not stay on scene.

STAR-1 (Calgary) has been dispatched for a scene call emergency in the Carstairs, AB area.

RCMP spokesperson Patrick Lambert said people’s behavior and actions while on the road can have “catastrophic” results.

‘It does seem to be happening a lot’

Katherin Beyak is a criminal defense lawyer in Calgary. Her practice is focussed on driving-related offenses.

“It does seem to be happening a lot,” said Beyak. “There’s a lot of, or at least I’ve seen in my experience, some that spill into parking lot fight type of incidents or very serious traffic tickets.”

Drivers who are involved in an accident, but don’t stick around can also face charges for failing to remain at the scene, which RCMP said happened in this case.

“You are required in law to stop and to call for assistance and to provide your information and cooperate with the investigations so there are various charges and violations that can stem from that,” said Beyak.

Anyone with information or dashcam footage is asked to contact their local police, Didsbury RCMP at 403-335-3382, or Crime Stoppers.