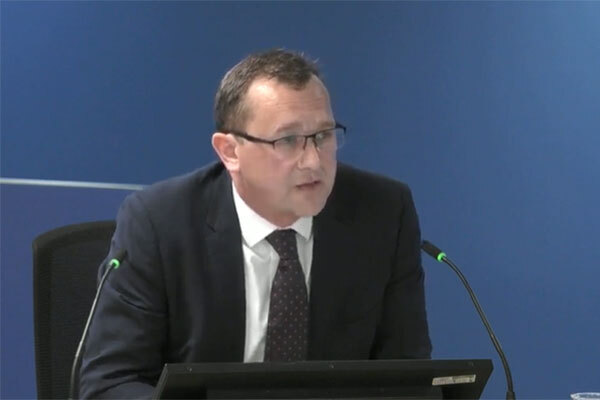 He repeated what has been heard by the inquiry numerous times – that it was accepted at the time that the building regulations were strong enough to prevent a large-scale fire happening.

The LRG, the staff of whom are employed by the London Fire Brigade (LFB), coordinates the activities of a wide range of organizations in the event of an emergency.

The Act imposes a set of roles and responsibilities on those organisations, all of whom have a role to play in preparing for and responding to emergencies.

the London Risk Advisory Group (LRAG), made up of members from a number of category one and two responders, such as police, local authorities, and utilities, maintains the ‘London Risk Register’ – a document that provides a list of the principal risks that may affect London as a whole.

Before the Grenfell Tower fire in June 2017, the latest update to LRR was in February of the same year.

Lead counsel to the inquiry Richard Millett QC said the closest thing to a fire risk the inquiry could find in the document was a wildfire or forest fire.

“Is it right that a high-rise or urban tower block fire is not listed?” he said.

Mr Hetherington said: “It wasn’t contained as a risk in the National Risk Register or the local risk assessment guidance that was provided to us as an applicable risk.

“Nor was it raised by any one of the agencies as a member of LRAG as a risk that they considered [was] required.”

Mr Millett said that by February 2017 there had been two major fires in tower blocks since 2009, in Lakanal House and Adair House, a tower block less than a mile from Grenfell.

He said: “Do you know whether any consideration was given to tower block fires in light of these experiences when reviewing this document in February 2017?”

Mr Hetherington said: “Not specifically at that time, no. It wasn’t brought to the attention of the group that there was a requirement in response to either of those.”

The inquiry was shown an individual risk assessment, which provides more granular data on specific risks, that had no reference to any major London fire.

And the description of a ‘complex built environment’ in the document included things like sports stadiums and large educational settings, but failed to include dense housing or tower blocks.

Asked why that was the case, Mr Hetherington said: “Because of the guidance given to us at the time, either through the NRR and its associated local risk assessment guidance or anything provided by any of the individual agencies considering risks pertinent to them that they need to draw to the attention of multi-agency partners never brought that around.

“There was a sense of the building regulation standards that we’ve heard already in evidence being sufficient to ward against or mitigate against fires of that nature.”

Mr Millett said: “So it is right that the LRG’s view, those compiling this risk register, was that the building regulations were sufficiently robust that an emergency within the Civil Contingencies Act would not need to be contemplated where it arose from a tower block fire . Simply not necessary to consider it.”

Mr Hetherington: “Not necessarily London Resilience Group’s view – we’re not the only ones who contribute to this, but there was no guidance or direction given to us as a secretariat and managers of the Local Risk Advisory Group to produce the London risk register of that type of risk occurring.”

“And a fire occurring in such a building was always going to pose surely a risk of some kind.

“The chance of an urban fire or tower block fire was much more likely in London than for example, a wildfire.”

“How can you account for the fact that a tower block fire, given everything you’ve just accepted, was omitted from this document?” Mr Millett said.

Mr Hetherington said: “Because, again, it was never raised by any of the individual agencies who appreciated it as a risk factor that they could generate into this collective risk register at any stage.

“It was never raised by somebody to bring it to the attention of a collective. Nor was it contained within the risk assessment guidance given by central government.”

He said it has now been reflected in the 2019 version.