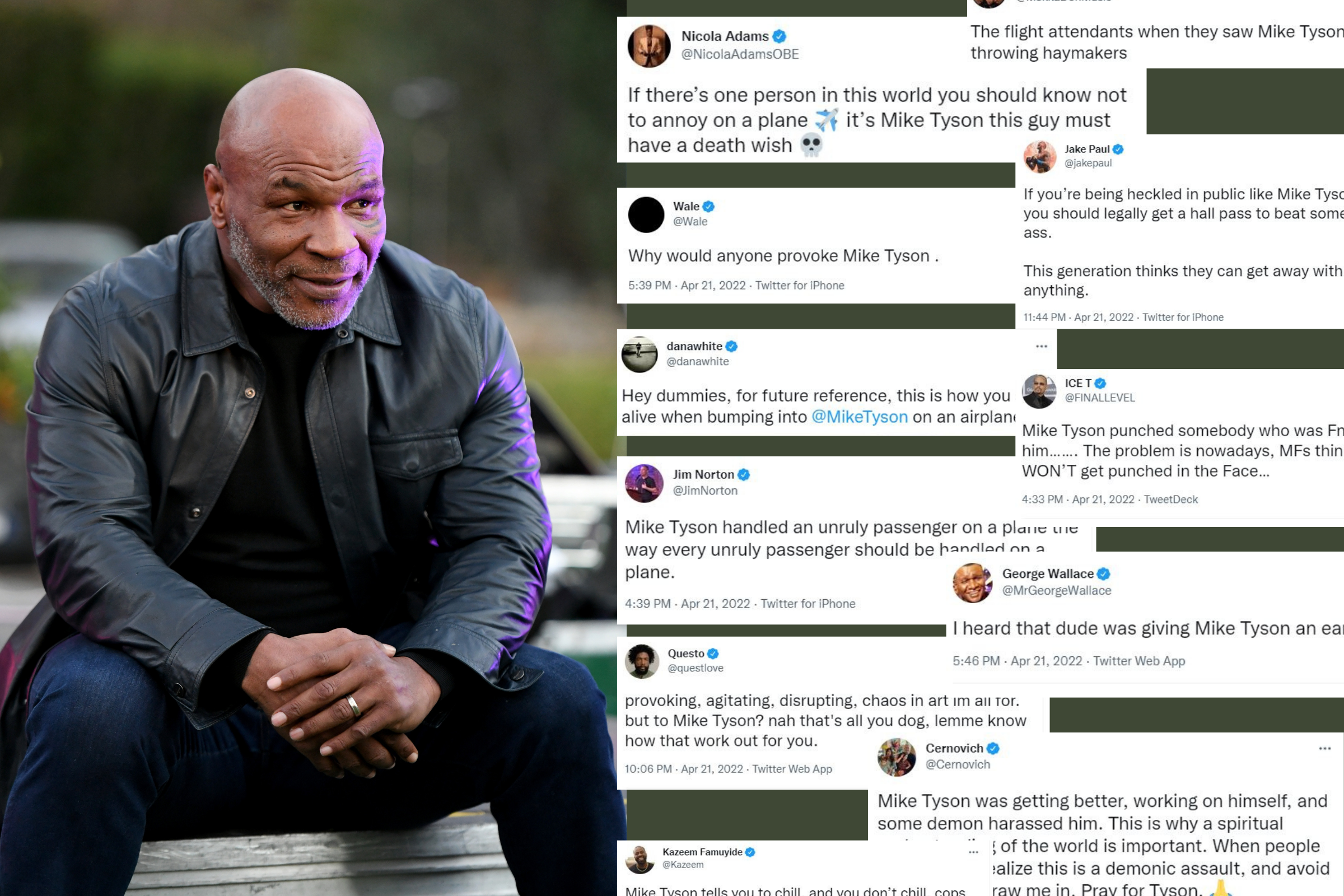 Celebrities have come out in support of Mike Tyson after he was reportedly filmed punching a man in the face on a plane.

A video, which seemingly shows the former heavyweight boxer repeatedly punching a fellow passenger in the face, went viral on Thursday, but the reaction to the incident seems to overwhelmingly support Tyson.

That’s because the extended version of the video, obtained by TMZ, shows the passenger “provoking” Tyson from the seat behind him. The after effects of Tyson’s confrontation show the passenger with cuts to his head from him.

Tyson became a trending topic on the internet after the video was released, with a number of verified accounts on Twitter reacting positively for the boxer.

Dana White, president of the Ultimate Fighting Championship, got over a million views on an old video he shared, which shows him and Tyson in a light-hearted confrontation on a plane. White wrote: “Hey dummies, for future reference, this is how you stay alive when bumping into [Mike Tyson] on an airplane.”

Many other people pointed out that the passenger was repeatedly “harassing” Tyson before being punched. Rapper and actor Ice-T wrote: “The problem is nowadays, MFs think they WON’T get punched in the Face…,” while Ray Mancini Jr. simply stated: “Dude was definitely asking for it from Mike Tyson.”

The Roots drummer and now Oscar-winning director Questlove weighed in too. He suggested he’s all for pushing boundaries in the name of art and entertainment, but not around Mike Tyson — “nah that’s all you dog, lemme know how that work out for you.”

Musician DJ Kam Bennett also pointed out that the passenger made a mistake, writing: “Mike Tyson is the wrong one to play with.. I thought yall knew this?” While American comedian George Wallace delivered a deadpan reference to Tyson’s history in the ring by writing: “I heard that dude was giving Mike Tyson an earful.”

British boxer Nicola Adams shared her reaction, stating that the passenger bothering Tyson “must have a death wish.”

YouTube star-turned-boxer Jake Paul also weighed in. He commented that: “This generation thinks they can get away with anything” and that Tyson should have legally be given a “hall pass” to beat someone up if he’s being heckled in public. Sports writer Kristian Sturt then directly questions Paul and asked how he did n’t see the irony in his comments from him.

After the video and incident became a talking point on the internet, some people drew comparisons between Tyson and Will Smith losing his cool and slapping Chris Rock onstage at the 2022 Oscars.

Journalist Ksenija Pavlovic McAteer wrote about how “people are losing their cool” and that seemingly, “celebrities don’t care how they come across anymore.”

Journalist Tariq Nasheed came out in support of Tyson’s actions, but called out the way that the situation has been framed in the media. He wrote, “I do n’t like this low-key anti-Black, white media narrative that ‘Mike Tyson lost his cool from him’.”

Newsweek has contacted representatives of Tyson, JetBlue and the San Francisco Police Department for comment.