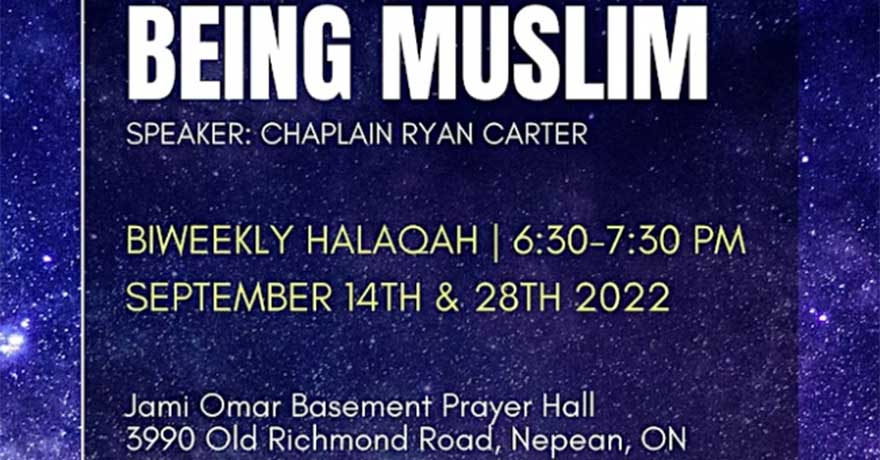 We would like you to invite us to our new, bi-weekly Halaqa Series, “Being Muslim” presented by ChaplainRyan Carter to be held at Jami Omar Mosque in Ottawa. Dates of the halaqas are located on the poster for confirmation 🙂

This Halaqa is going to be held every other Wednesday from 6.30pm-7.30pm at the Basement prayer hall inside Jami Omar Masjid in Ottawa.

The first two sessions are on the following dates.

Ages 25-35, but everyone is welcome! Refreshments will be provided, Insha Allah. We look forward to seeing you 🙂

Chaplain Ryan Carter is a chaplain for the Canadian Armed Forces. His broad international experience has placed him in leadership positions in Muslim communities around the world. Of Afro-Caribbean descent, after embracing the Muslim faith in 2001, he began his traditional Islamic education in 2003 in Canada and Cairo where his focus was Arabic and Islamic Law. Seeing the need for further engagement in the area of ​​social justice and reconciliation after societal conflict, he returned in 2007 to complete his degree in Criminology and Social policy at Ontario Tech University. He continued his education abroad, earning a MA in Middle Eastern studies from Durham University, UK a MA in Muslim-Christian Relations from Hartford Seminary, USA and is currently a doctoral candidate in Islamic History at Queens University.