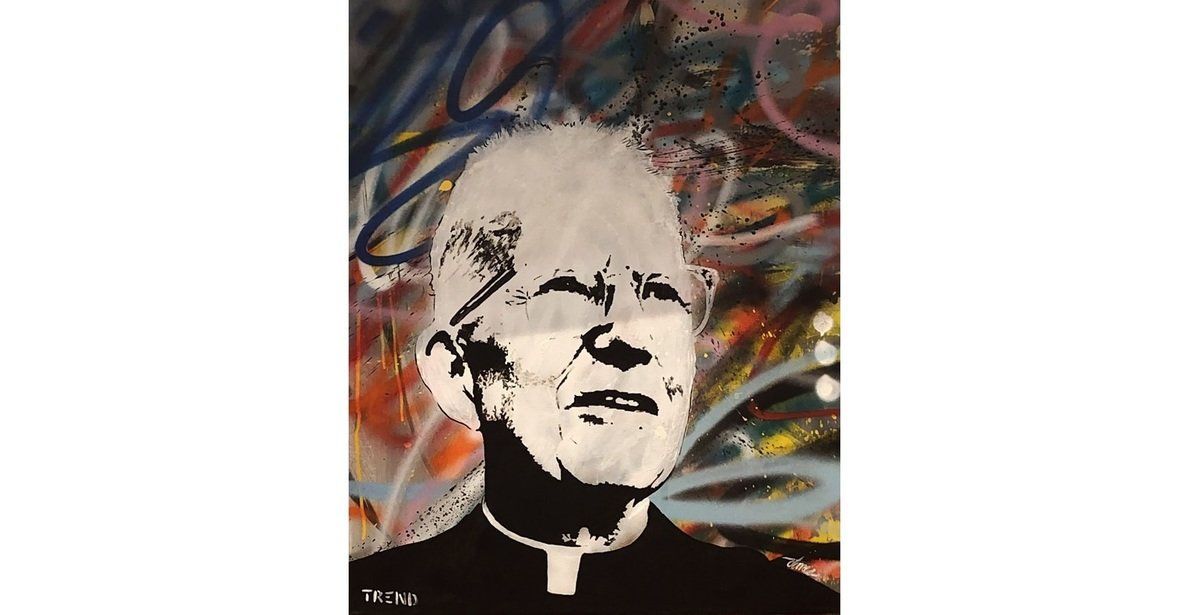 When the small, wiry priest with white hair and glasses walked the sidewalks and alleyways near St. Aloysius Church in Washington, DC, the residents there knew his name: Father Horace McKenna. The Jesuit priest was known for giving the money in his pockets to the poor people he met, and visiting families in that neighborhood and bringing them food, joined by student volunteers from Gonzaga College High School.

City officials knew his name too, and a phone call from him could spur them to find a room for a homeless individual or family. The man known as Washington’s “priest to the poor” helped found several programs for those in need, including the So Others Might Eat (SOME) soup kitchen that has grown into a comprehensive network of services for the poor and homeless in the nation’s capital.

And when he died in 1982 at the age of 83, his name lived on, as the St. Vincent de Paul Society’s outreach to the poor in the basement of St. Aloysius Church where he had been a guiding light for more than two decades was renamed the next year as the Father McKenna Center.

On May 11, 2022 – the 40th anniversary of the day that Father McKenna died – his name and legacy were remembered at a Memorial Mass at Holy Trinity Parish’s Chapel of St. Ignatius in Washington’s Georgetown neighborhood.

“That’s the gift of Horace McKenna. His legacy lives on in the agencies and the groups he founded,” said Dan Kerns, the executive director of the Father McKenna Center, noting that the priest also helped found Martha’s Table that serves low-income families in the Columbia Heights neighborhood and the House of Ruth now at Thomas Circle, NW, that serves homeless women and families.

The Father McKenna Center’s director – who served as the Head of School at Georgetown Visitation Preparatory School in Washington for 33 years before retiring in 2019 – was a longtime volunteer at the center. And Dan and Alice Kerns’ four children – Matt (Gonzaga class of 2015), Danny (Gonzaga class of 2018), Tom (St. John’s College High School class of 2019) and Katie (Visitation class of 2022) also volunteered there.

The website for the Father McKenna Center notes that the priest is “our namesake, but more than that, he is our inspiration. We walk and work in his footsteps every day, grateful for his example of him. ”

“We have a variety of ministries (there), all of which kind of started with Father McKenna,” Dan Kerns said.

The center’s Day Program offers case management and other services for homeless men. Its Hypothermia Program offers homeless men shelter and a supportive community during the winter. The Food Pantry there provides groceries to families and seniors in Washington facing food insecurity. The young women and men volunteering in the center’s Immersion Service Learning Program help people facing homelessness and poverty and learn about those issues in a personal way.

Kerns noted the center has launched a new program, the McKenna Academy, which he described as a “six-month boot camp” providing homeless men with education and life skills, to help them get a job with a living wage and to find stable and self-sufficient housing.

Father McKenna wrote about “slow miracles” and the importance of men reclaiming their lives, and Kerns said the center’s programs do just that by helping and supporting homeless men in rebuilding their lives.

A portrait of Father McKenna by artist Jim Trend was displayed in an easel behind the chapel’s altar and was also featured on a prayer card for Mass-goers.

The celebrant and homilist at the Mass, Jesuit Father Kevin Gillespie – the pastor of Holy Trinity Parish – traced the trajectory of Father McKenna’s life, noting how while stationed in the Philippines as a young Jesuit, he was profoundly moved by the abject poverty he witnessed there. After his ordination, Father McKenna was assigned to serve at Jesuit parishes in Southern Maryland, where he was mentored by Jesuit Father John LaFarge, a noted writer and champion of racial and social justice. As a parish priest and pastor for more than two decades in St. Mary’s County parishes, Father McKenna brought healing and hope to people experiencing poverty and segregation. From 1964 until his death in 1982, he was assigned to St. Aloysius Parish in Washington.

Father Gillespie said that as a young Jesuit in the summer of 1971, he worked with Father McKenna serving the city’s poor.

“He knew more needed to be done,” Father Gillespie said, noting how the programs that Father McKenna founded, including the neighborhood housing project Sursum Corda (Latin for “Lift up your hearts”) often had biblical or scriptural roots. “He was transforming Scripture into the lives of the poor.”

Then the priest invited people at the Mass to share stories about Father McKenna. Patrick McCourt, a Holy Trinity parishioner who is a retired engineer, said that as a new freshman at Gonzaga in September 1961, he met Father McKenna on his first day of class, and volunteering with him serving the poor in that neighborhood had a profound effect on his life, inspiring him as an adult to be involved in social justice work at his parishes, including bringing his religious education students to St. Aloysius to serve with the elderly priest.

Jesuit Father Tom Buckley shared his memories of living with Father McKenna at St. Aloysius and witnessing his dedication to the poor.

“He was a member of everybody’s family, so loving,” he said.

In a video produced in 2012 on the 30th anniversary of the priest’s death, Father Buckley told a story about how one Christmas night, a St. Aloysius parishioner saw a man and woman with a baby walking in the neighborhood in the freezing cold. On the way to a Southern state, their car had broken down, and they had walked from the nearby Union Station after running out of money for train fare.

Father Buckley said the parishioner knew whom to call – Father McKenna – and the elderly priest in his pajamas first invited the family into the St. Aloysius rectory, then he called a DC official, identifying himself as “McKenna,” and a motel room was found for the family, giving them a “room at the inn” that Christmas.

“She (the parishioner) knew what to do. Call Father McKenna… I loved the old man,” said Father Buckley who works as a clinical social worker and lives in the Jesuit residence at Georgetown.

After the Mass, Father Buckley said the late Jesuit was “free of prejudice. I don’t just mean racial prejudice. I mean prejudice against anyone. He was very open to being with everybody. He’s listening to you. He’d love you. He’d respect you. ”

McKenna Hall at Holy Trinity, a main meeting room in the parish center, is named for the priest. A plaque on the wall there remembers him as an “Apostle of the Poor, Friend of the Homeless, Promoter of a Faith that does Justice, Devoted Pastor, Compassionate Confessor (and) Zealous Advocate for African-Americans.”

The walls there are inscribed with several quotes from Father McKenna, including, “… That is the test of our faithfulness to Christ, how we relate to the poor.” Another quote from the priest says, “The greatest undeveloped resource of our nation and our world is the poor.”

As he concluded his homily at the Mass, Father Gillespie held up Father McKenna’s cane, joking that it was a “second-class relic,” but adding that the cane had been at the bedside of many people as they were dying, to comfort them. . Then he propped the cane against a large candle beside the altar, where it remained during the Mass as a physical reminder of the priest.

A prayer was offered for the poor and those who serve them, especially at the Father McKenna Center.

Just before the Mass ended, Father Gillespie remembered how when he visited Father McKenna on the night before he died, the priest told him in a craggy voice, “One thing to remember, Kevin, always look to see Jesus in every person.”

Earlier in his homily, Father Gillespie said, “This man was set apart from the very beginning,” and he told the story of how, after Horace McKenna’s birth in New York City in 1899, his parents took him to be baptized, but the priest initially objected to their choice for his name, saying, “There’s no saint named Horace!” to which his parents responded, “Father, there will be!”