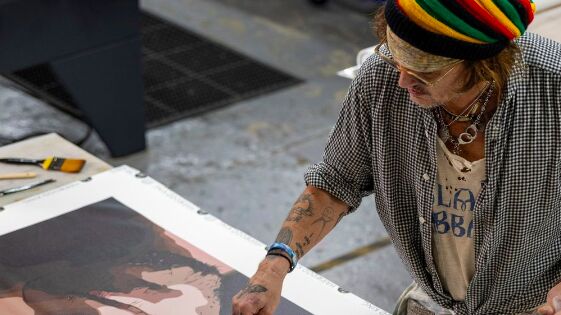 Johnny Depp has earned over 3.6 million dollars within hours after releasing his own artwork of 780 prints at the Castle Fine Art gallery in London on Thursday.

His art was sold out on the same day, with limited edition portraits being valued at 3,973 dollars each, and a set of four prints being priced at 15,040 dollars.

“Johnny‘s debut collection Friends & Heroes sees him focus on people he has known well, and who have inspired him as a person,” reads the description.

“Each image is an intimate reflection of their character in Johnny‘s eyes; to portrayal of how they have revealed themselves to him.

“Working from photographic references, each image has been stripped back to a simpler and iconic portrayal of the subject, which Johnny has then developed and energized with his characteristic freehand flourishes.”

The famous Hollywood star, who recently won the defamation trial against his ex-wife Amber Heardalso offered his thoughts on what art represents for him.

“I’ve always used art to express my feelings and to reflect on those who matter most to me, like my family, friends and people I admire,” Depp said.

“My paintings surround my life, but I kept them to myself and limited myself. No one should ever limit themselves.”