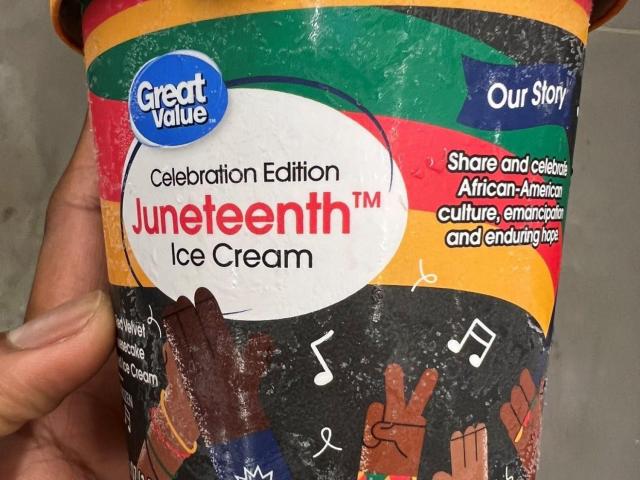 Raleigh, NC — Over the weekend, the internet was abuzz over Walmart selling Juneteenth-themed ice cream.

The packaging was decorated in pan-African colors- which is not associated with Freedom Day as traditional red, white, and blue is- had a message on the side that read, “Share and celebrate African-American culture, emancipation, and enduring hope “.

Walmart has since removed the ice cream from its stores after receiving backlash online. Many saw it as a form of corporate cultural appropriation of the Black community.

“You can have a trademark registration for a holiday if it pertains to t-shirts, or pillow cases, or what you have,” said trademark attorney Deborah Mortimer. “It has to be connected to a particular good or service.”

“Do they plan to give back to any causes, any African American causes?” asked Mortimer.

WRAL News reached out to Walmart to ask that and other questions and have not heard back at the time of this article’s publication.

Since Juneteenth became a federal holiday, multiple variations of “Juneteenth” have been filed with the United States Patent and Trademark Office.

At last check, of the 32 active “Juneteenth” variations filed, only 7 are registered, meaning someone owns the right to profit from goods under the trademark’s classification, which in this case is 1B.

There’s even a trademark for wine under the name “Thanksgiving.”

But having a registered trademark doesn’t mean you own the holiday.

The Balchem ​​Corporation tried to trademark “Juneteenth” under a 1B basis for foods including desserts such as ice cream, However, attorney Adjckwc (pronounced A-Zha-Ko) O. Browne showed WRAL a document showing that trademark was suspended pending someone else’s application under “Juneteenth Joy”.

The document reveals the argument the corporation made for the trademark was “not persuasive.”

Browne said she wants Juneteenth to be understood for truly celebrating freedom for every American, even those profiting from it.

“Hopefully they’d put it back into the communities that were impacted by what Juneteenth celebrates,” said Browne.

That’s where Mario Bowler, Senior, a Black man comes in. He’s that someone else who has a trademark application for “Juneteenth Joy.”

“We want to reclaim that part of our heritage and legacy,” said Bowler.

Bowler lives in Pennsylvania, and filed the trademark for “Juneteenth Joy” for some of his products the day after President Biden recognized Juneteenth as a federal holiday.

Bowler’s company already sells popcorn in a few flavors and candles. He says they’re trying to dabble in jams, jellies, and barbecue sauces too.

Their website is set to launch soon. Bowler said by filing the trademark, he hopes to use revenue to protect the Black community’s culture. He made it clear, everyone is a customer in his eyes of him, but he wanted to serve other members of the Black community. So, he got his wife Stephanie and son, Mario Jr. involved.

“We’re all HBCU graduates,” said Bowler. “So, we want to establish scholarships for students who want to attend HBCU.”

He said he understands college isn’t the path for everyone, so Juneteenth Joy also aims to work with organizations to help find job placement in his community.

“We have so much revenue and access in our community, but it’s constantly going out,” said Bowler. “We hope that a brand like Juneteenth Joy that represents a number of different things, we want to recycle those dollars in the community and really do some good things out there.”

The company is in its infancy at roughly a year in, but the plan for Juneteenth Joy is to grow and expand and set an example for other Black Americans who want to help their communities help themselves.

“As Black consumers, we need to police our culture and pay attention to what’s going on out there,” said Bowler.

Deborah Mortimer said Bowler is at the point where he has to prove to the USPTO that he’s selling products, which he says he’s been doing.

Adjckwc Browne said Bowler could license out variations of “Juneteenth” being marketed for products under his trademark classification once he’s registered. If that happens, Bowler plans to-again-reinvest in the Black community.

The history of Juneteenth

Juneteenth, or June 19, is the oldest nationally celebrated commemoration of the abolition of slavery in the US

The day is meant to commemorate the end of slavery for slaves in Texas, who weren’t emancipated until two years after Abraham Lincoln’s Emancipation Proclamation.

Traditionally, celebrations consist of music, prayer and church services. As Black Texans moved to other areas across the US, the tradition spread throughout the country.

In 2021, Gov. Cooper and Mayor Mary-Ann Baldwin declared June 19 as Juneteenth Day in North Carolina and in the City of Raleigh.

Slavery did not end on Juneteenth. In some cases, slave owners withheld information about Black Americans freedom, and others refused to release their slaves until forced to.