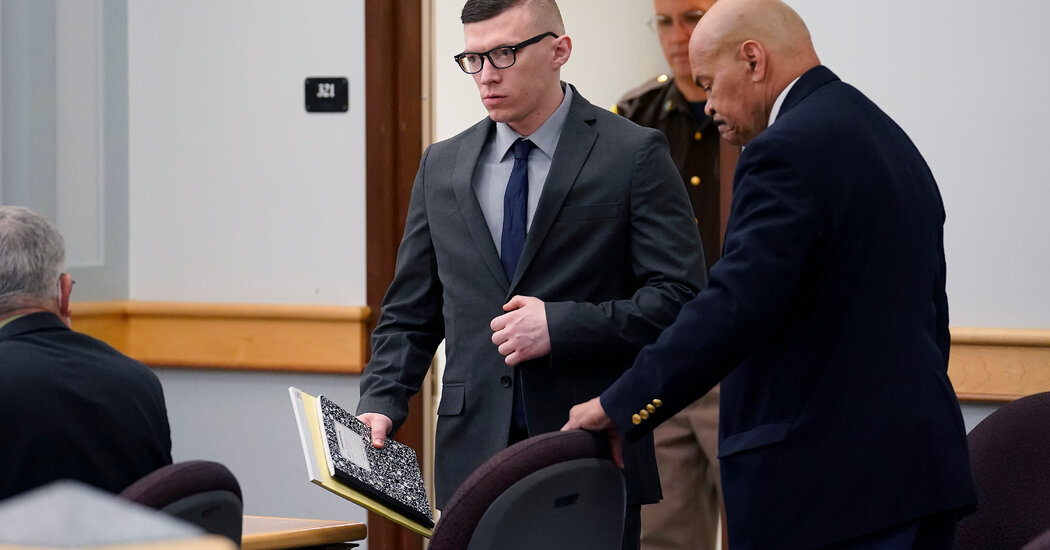 A jury in New Hampshire on Tuesday acquired a commercial truck driver of all charges in connection with a 2019 crash on a rural highway that killed seven members of a motorcycle club and shocked the state.

After an emotional 12-day trial, the truck driver, Volodymyr Zhukovskyy, 26, of West Springfield, Mass., was acquitted of seven counts of manslaughter, seven counts of negligent homicide and one count of reckless conduct. He had been driving a 2016 Dodge 2500 pickup truck that collided with an oncoming procession of motorcyclists who were members of a club of ex-Marines on June 21, 2019, in Randolph, NH

Mr. Zhukovskyy took heavy breaths as he waited for the jury to read the verdict in Coos County Superior Court in Lancaster. When the verdicts were read, he looked up, pointed at the sky and wept, taking off his glasses to wipe his tears.

Mr. Zhukovskyy had been in jail since his arrest three years ago, according to WMUR, a television station in Manchester, NH The Department of Homeland Security issued a detainer for Mr. Zhukovskyy, who was born in Ukraine. He was in custody of Immigration and Customs Enforcement on Tuesday, pending an appearance before an immigration judge, according to a Homeland Security spokesman.

Mr. Zhukovskyy’s family said in a statement that they thanked God, the court and the defense lawyers for an “honest and fair trial,” according to The Associated Press.

“Our family expresses its deepest condolences to the family and friends affected by this tragedy,” the family said. They called Mr. Zhukovskyy a “very honest and kind man. He would never have done anything to hurt anyone.”

Jay Duguay, a public defender who represented Mr. Zhukovskyy, declined to comment on the verdict. But Robin Melone, the president of the New Hampshire Association of Criminal Defense Lawyers, said in a statement that the case had been “tried in the press from day one,” and that prosecutors had “hoped to ride that vitriol to a guilty verdict. Instead, the jury listened to the evidence, thought critically, and did its job.”

The New Hampshire attorney general, John M. Formella, said he believed that Mr. Zhukovskyy should have been found guilty and praised prosecutors for how they had laid out the case.

“Our hearts go out to the victims and their families,” Mr. Formella said in a statement. “We thank the court and the jurors for their service, and while we are extremely disappointed, we respect the verdict and our system of justice.”

In closing arguments on Tuesday, lawyers on both sides offered differing views of who had been responsible for the deaths of seven people who had been riding their motorcycles on Route 2, about 100 miles northeast of Concord. Some were en route to a charity event in Gorham when a flash of collisions sent riders hurtling to the road in a scene that witnesses described as bloody and chaotic.

Mr. Duguay argued in his summation that Albert Mazza Jr., the president of the Jarheads Motorcycle Club who was killed in the collision, had caused the crash because he had been “driving his motorcycle while drunk, wasn’t looking where he was going , lost control of his bike and just slid into the oncoming truck.”

Mr. Duguay also said that prosecution witnesses had offered conflicting accounts of what transpired before the crash: One witness testified that she had seen Mr. Zhukovskyy’s truck swerve in the lanes, while another said that he had not. Witnesses, Mr. Duguay said, had shared “completely different irreconcilable recollections.”

Prosecutors, however, said that while Mr. Mazza’s impairment was a “poor choice,” it ultimately had nothing to do with the crash.

“Not one person saw Mazza impaired or driving off the road,” Scott D. Chase, a New Hampshire assistant attorney general, said during closing arguments. “But every person on that road saw the defendant all over it.”

A report from the National Transportation Safety Board released in December 2020 found that on the day of the crash, Mr. Zhukovskyy had been “impaired by several drugs,” including heroin, fentanyl and cocaine. He was working for Westfield Transport, a trucking company, at the time and was driving to Albany, NY, and Gorham, according to court records.

Mr. Zhukovskyy also had a suspended license in Connecticut, which should have led the Registry of Motor Vehicles in Massachusetts to revoke his license, the report said. But because of failings in the notification process for out-of-state driver’s licenses, as reported by The Boston Globe in a 2020 investigative series, the alert never went through, the report said.

The NTSB also found that the “probable cause” of the crash was Mr. Zhukovskyy “crossing the centerline and encroaching into the oncoming lane of travel, which occurred because of his impairment from use of multiple drugs.”

Last week, Judge Peter H. Bornstein of the Superior Court dismissed eight charges that were related to Mr. Zhukovskyy’s drug and alcohol intake at the time of the crash, saying in court that “there is simply insufficient evidence from which a jury can find beyond a reasonable doubt that the defendant was impaired to a degree.”

Several witnesses offered grueling testimony during the trial, describing in detail their fellow riders’ final moments. Photos from the scene showed motorcycles strewn across the roadway and nearby grassy field, missing wheels and various parts.

The victims were from New Hampshire, Rhode Island and Massachusetts and ranged in age from 42 to 62. All but one had served as Marines.

One witness, Valeria Ribiera, said that she did not know if Mr. Mazza was drunk at the time, and that he had been “driving straight until he was exploded.”

Michael McEachern, who survived the crash, testified that he had seen “a big blue-black truck just plowing through motorcycles like a bowling ball.”

Another witness, Dana Thompson, said he saw someone pinned beneath the trailer that Mr. Zhukovskyy’s truck had been towing.

In a statement on Twitter, Gov. Chris Sununu of New Hampshire, a Republican, called the verdict an “absolute tragedy.”

“I share in the shock, outrage, and anger that so many have expressed in the three years since the seven members of the Jarheads Motorcycle Club were taken from us,” he said. “My heart goes out to their families, friends, and loved ones on this especially dark day.”