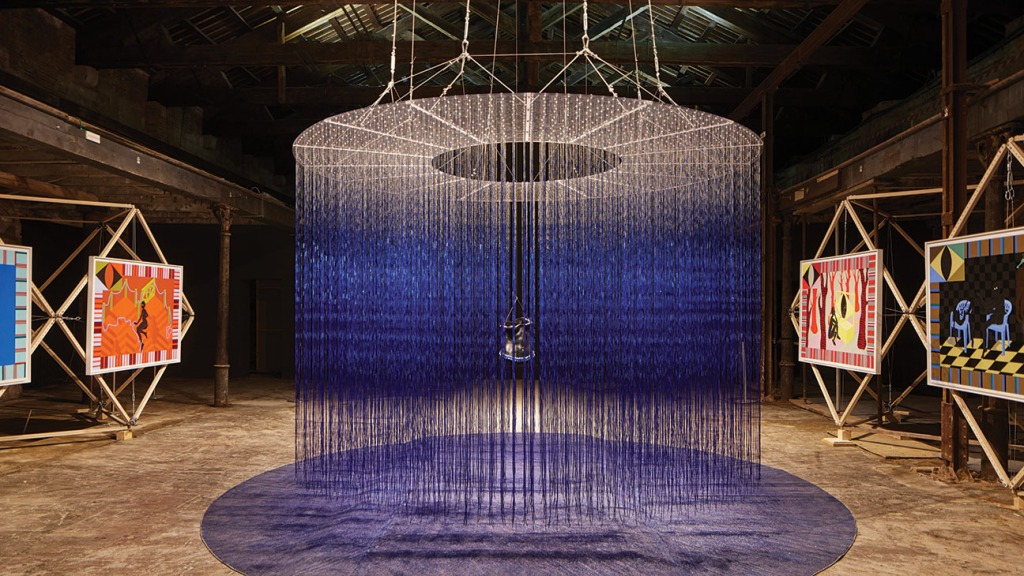 What does art look like in an intangible digital space? Alexandra Grant, along with her partner, Keanu Reeves, is determined to help her fellow artists answer that question. The two are advisers for The Futureverse Foundation, a new charitable initiative designed to encourage artists to participate in the internet’s next frontier by creating work to be contemplated and sold in the metaverse, an integrated network of virtual, digital worlds that in its most ambitious conceptions may come to resemble The Matrix.

In particular, The Futureverse Foundation is betting that non-fungible tokens, or NFTs (unique digital objects secured by blockchain technology), can be more than speculative instruments — that they can have genuine artistic value. The Futureverse Foundation is committed to funding artists who will create powerful works to be transformed into these crypto assets, proving that fine art has a home in the next iteration of the internet, often called Web 3.0.

“I feel like the Futureverse Foundation is a proposal. If we do have this opportunity of building a new economy of [cultural] exchange, how do we?” asks Grant. “It’s new for all of us to be thinking about the partnerships between the art world, Hollywood and tech coming together in this really beautiful way.”

Created in collaboration with Non-Fungible Labs and Fluf World, a New Zealand-based NFT company, The Futureverse Foundation plans to “make the metaverse accessible to more people, especially from disadvantaged backgrounds,” Grant says. “This is the beginning, it’s a nascent moment for a technological shift where some people understand that they’re already in the metaverse, and some people don’t know what an NFT is.”

Grant, along with Reeves and Brooke Howard-Smith, co-founder of Non-Fungible Labs, plans to help move artists who work in traditional two- and three-dimensional mediums into the digital space by guiding them in the process of translating their art. into NFTs, for sale in the metaverse.

“I am honored to be joining Non-Fungible Labs’ efforts in cooperation with Alexandra Grant for the extraordinary program and opportunity of the Futureverse Foundation, in support of artists and creators globally,” Reeves said in a statement.

Advised by peers and colleagues in the art world, The Futureverse Foundation will select artists to support based on the quality of the work, with special attention paid to Indigenous and women artists in an effort to diversify the art world, especially as it exists in the NFTspace. The initial seed round of funding ($250,000) has been donated by Non-Fungible Labs, with much of its revenue generated by NFT sales. (Some of its best-sellers are digital spiders called “thingies.”) In anticipation of The Futureverse Foundation’s launch, Non-Fungible Labs made its first gift: a 100,000-euro donation to Nana Oforiatta Ayim, to support her work curating the Ghanaian Pavilion at the 2022 Venice Biennale.

“I sort of see these grants as social acupuncture; you’re not going to be able to change everything because that’s not the intention, the intention is to find the right energetic meridian to put a needle of change in,” Grant says. “So even though it was a real-world pavilion, that happened because of conversations that were all digital. That translation between worlds is already integrated.”

Many industries are working toward building a deeper relationship with the metaverse, but the challenge is to do so in a way that is equitable and doesn’t mirror the structural disadvantages that exist in the traditional art world. Before The Futureverse Foundation took shape, Howard-Smith helped establish an open pledge for large tech brands to sign and commit to advocating for an “open and inclusive metaverse.”

“This really is phase one of that,” he says of his collaborative foundation with Grant and Reeves. “Meta, Google, Amazon and everyone that’s signed [have] pledged that they were going to consciously drive to make sure that this version of technology is not the exclusive version that we built by accident over the last 30 years.”

Grant hopes the foundation can help democratize the buying, selling and valuing of art, both in the metaverse and in real life.

“A lot of people from a ‘fine arts background’ think of NFTs as being an image with an accounting ledger like a blockchain attached to it,” she says. “What’s actually happening is a rethinking of not just currency, but of what an object that can $ be shared is. Does it have physicality? Does it have value? Who gives it that? Inadvertently, the foundation is causing a reevaluation of Western art, of practices based on colonialism, of all these questions.”

A version of this story first appeared in the June 22 issue of The Hollywood Reporter magazine. Click here to subscribe.