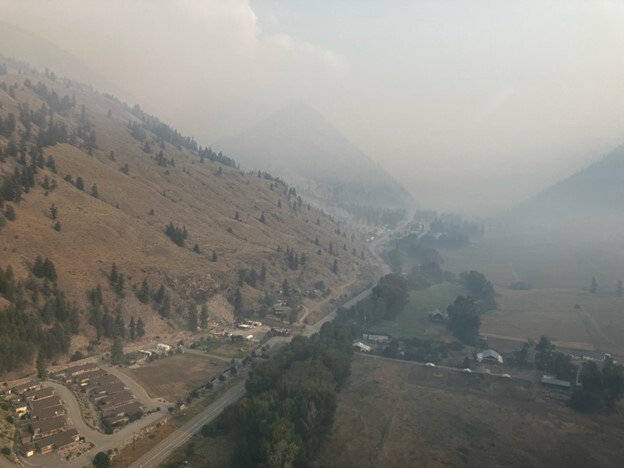 The Keremeos Creek wildfire has grown to 5,903 hectares but there is some good news from the ground after what one BC Wildfire Service information officer called a “hairy” night.

Currently, 547 properties are under evacuation order and 1,050 are under alert.

“We did have the fire and some embers blown across Highway 3A getting to the other side of it,” Zandberg said.

“We had people there. They actioned it immediately, but it just sort of speaks to the risk and the intensity of the wind yesterday. That was knocked out, that small spot was knocked out right away.”

BCWS requested a closure of Highway 3A to get evacuations out and allow fire crews to get to work, which remains in place as of Friday afternoon.

“I’ll use the word ‘hairy’ along the 3A there to that southern portion,” Zandberg said.

“But you know, just excellent work done by all the people who are working with us on this fire. No new structures lost to report, very happy about that.”

Fire activity died down around 3 am and things have been very quiet since.

“I’m just happy to report that it’s nice and quiet in there and we’re anticipating it staying that way because the fuels are gone [due to prescribed burns]. So that’s really good,” Zandberg said.

“Right now, we’re really trying to contain the fire into the Cedar Creek basin and we don’t want it to cross over into the Olalla drainage. So this is something that’s just top of mind for us.”

Up at Apex Mountain, things are looking good as well. Zandberg noted and apologized that a confirmation he made this week about the distance from the fire to Apex was incorrect, and that the fire is “a lot farther” than 2.5 kilometers away from the resort.

Weather continues to cooperate on the active flanks of the fire, with no major wind like Thursday’s anticipated. However, Zandberg warned no predictions are certain, and temperatures may rise in coming days along with less humidity, which could cause a flare up in fire activity.

In a response to questions about the use of water bombers, versus helicopters, versus ground crews, Zandberg explained that he often sees social media comments about that.

“Maybe some people think it’s a bit of a magic wand, just have a bunch of water bombers come through and just knock the whole fire out. It really doesn’t work that way,” Zandberg said.

“It’s not the only game in town. There’s a lot of stuff that has to happen on the ground, to kill a fire and to pin it down… I think we have been using [aviation] to a limited degree. We’ll use it more if we have to.”

Fifteen helicopters are acting the fire as of Friday afternoon, part of a crew of more than 390 crew members fighting the blaze.

Structure protection has been a major priority, and crews are working hard on getting people back into their homes as soon as it is safe.

Zandberg also commented on the continued closure of Highway 3A, which he said has been helpful.

“We had a lot of people speeding through there and some real near misses, especially with our structural folks,” he explained. “People … coming within feet of fire engines on the road. Obviously we don’t want to see that .”

I have encouraged all travelers to respect road closures and drive carefully if and when the roads open, and anyone under evacuation order to leave rather than stay with their property.

“If we have the fire pick up through a wind event like we had yesterday, and things get crazy, then it’s really, really dangerous for everybody involved — first responders, as well as residents who’ve chosen not to leave — to just sort things out in the event,” Zandberg said.

“When things get critical we can see some real risks with safety. We don’t want to see that. So we encourage people to leave if they’ve been ordered to do so.”

The RDOS Emergency Support Services reception center is available for evacuations at 120 Green Avenue West until 5 pm, or later if orders expand, and can be reached by telephone at 250-328-8749.

RDOS EOC information officer Erick Thompson noted that emergency access permits for people who have been evacuated from their property are being evaluated on an individual basis, and encouraged individuals to reach out to the EOC at 250-490-4225 first to see if one of the many support service crews can help before applying to re-enter the evacuation zone.

Anyone needing assistance with animals can contact the Animal Lifeline Emergency Response Team at 250-490-7152.

Anyone wishing to help evacuates can donate gift cards, or make a cash donation to the Canadian Red Cross, but physical donation items are not being accepted at this time.

For an interactive map of properties on evacuation order or alert and more information click here.

The Regional District of Okanagan Similkameen and BC Wildfire Service are hosting a joint live event at 2 pm providing the latest information on the Keremeos Creek wildfire.

BC Wildfire Services says in its latest update that there was “minimal overnight growth” on the Keremeos Creek wildfire.

There were no structures damaged overnight.

“An investment is forecast today up to 1700 feet which will affect air operations. Smokey skies may delay aircraft operations in some sections. Conditions will be similar to yesterday with slightly higher temperatures and expecting gusty winds through the day,” BCWS says.

“Crews continue to work around the clock along Highway 3A and on the North side of Olalla Creek protecting structures.”

Structure protection crews are on the ground in Olalla with engines and sprinkler systems.

Over 540 properties in rural Keremeos, the Apex area and the Village of Keremeos are on evacuation order.

A further 1,050 properties are on evacuation alert in the same and adjacent regions.

Click here for an interactive map of all properties on order and alert.

Highway 3A between the Kaleden junction and Keremeos remains closed Friday morning as the Keremeos Creek wildfire continues to be aggressive.

Crews are actioning the wildfire which is impacting the community of Olalla along the highway.

As of Friday morning, there is heavy smoke over Olalla and the adjacent areas but there was minimal growth on the south flank.

“Overnight, downslope winds in excess of 30 km/hr drove fire downhill along Hwy 3A southwards towards Olalla,” reads an update from BCWS.

“Currently the fire is still within the evacuation order boundaries.”

Crews worked through the night on structure defense around the Cedar Creek drainage and kept fire on the west side of Highway 3A. Crews reported rank 4 fire behavior through the overnight periods. Wind and slope continue to be the biggest contributing factors for increased fire behaviour.

227 wildland firefighters are assigned to this fire working with an additional 170 structural protection personnel from fire departments across BC bringing the total to 397 firefighters.

Olalla has been evacuated as of Thursday. Apex Mountain Resort was evacuated earlier in the week.

An interactive map of all evacuation zones around the fire is here.

Call 250-328-8749 to access Emergency Support Services if your property is on an evacuation order.

Any evacuees concerned about their animals can contact ALERT animal rescue at 250-490-7152.

The Emergency Operations Center is open in Penticton Friday from 9 am to 5 pm at 120 Green Avenue.

DriveBC reports the next update on the status of Highway 3A will be at noon.