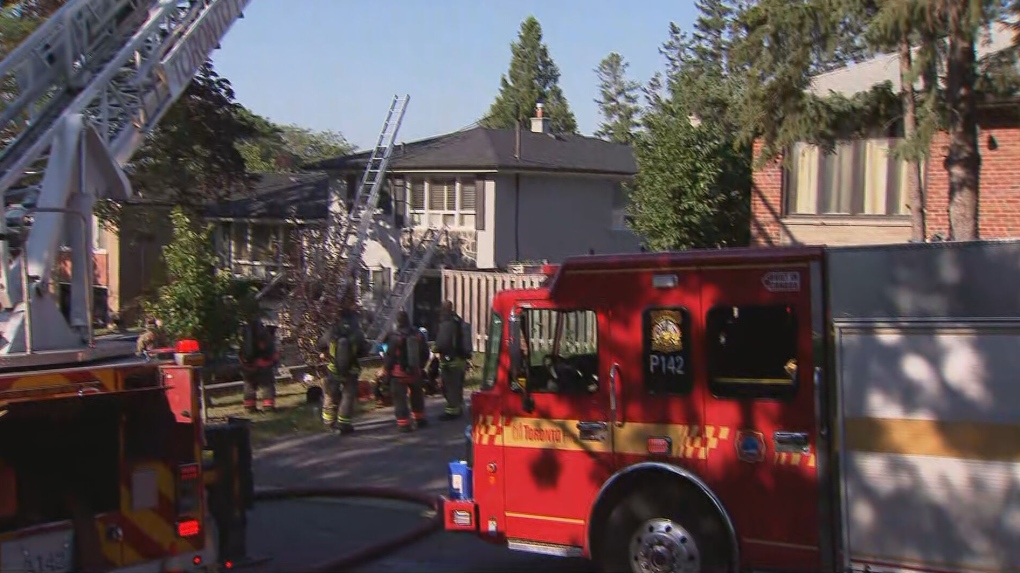 A man has died in hospital after being pulled from a fire that ripped through a home in North York early Saturday morning.

Shortly before 7:30 am, Toronto fire responded to a blaze at a house at 14 Calais Avenue, near Lexfield Avenue and Richard Clark Drive.

The fire appears to have started in the basement.

“They arrived to discover what we call a working fire. So the presence of smoke and flames. First priority, always, for the crews is to get in and conduct search and rescue,” Fire Chief Matthew Pegg told CP24 at the scene.

During their search, crews located a man in the basement who was subsequently removed from the home.

The man, who is 61 years old, was rushed to hospital in a life-threatening condition but was pronounced deceased in hospital shortly after, Pegg said.

“First and foremost, we extend our very sincere condolences to the family, friends and all those impacted by this tragic fire.”

It appears only one person was in the home at the time of the fire, according to Pegg.

A neighbor in the area, who identified himself as Jake, said he saw an unconscious man being pulled out of the house.

“There were six firemen who were carrying him out of the smoky house,” he told CP24.

“There’s a door on the side of the house, most of the smoke was coming from that door. But there was also some smoke coming out of the main door,” he added.

The fire is now under control and crews are on scene checking for hotspots.

The fire was upgraded to a third alarm at its peak with roughly 70 firefighters attending the scene.

“So we technically went to a third party. It’s what I would describe as a precautionary third alarm operated predominantly at a second alarm level but the incident commander, appropriately so, escalated to a third alarm just to make sure that we have enough people,” Pegg said.

The cause and origin of the fire is unknown.

Pegg said today’s humid weather made it difficult to put out the blaze.

“Operating in this type of temperature and humidity is really, really hard on firefighters who are in their protective equipment. So there’s a lot of extra attention that is paid to them by our rehab specialists and our colleagues at Toronto Paramedic Services to make sure that body core temperatures are safe and that everyone is safe and accounted for.”

An investigation is underway and the Office of the Fire Marshal has been notified.